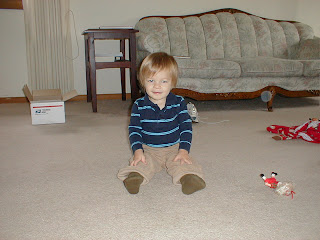 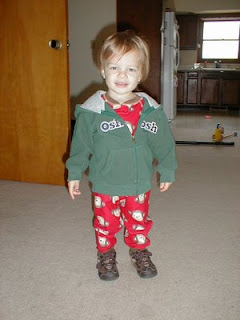 How Gareth Dresses Gareth
Posted by Erin at 6:36 PM 2 comments:

After saying that I needed to hang pictures and that I was about to hang pictures for the past four months, I've finally done it! Motivating factor: it was getting really annoying to try and read the microwave clock from the living room and hearing the ticking of the living room clock without being able to see it was getting on my nerves. Turns out my timing was good since the day after hanging all of this my watch battery died, so I have to rely solely on the wall clock now to tell when Gareth needs a nap. I've only done the living room so far, but that's the most important one since it's what other people see. Maybe I'll get around to hanging the rest of our stuff before we move... 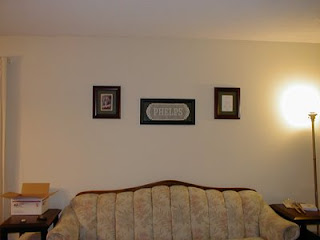 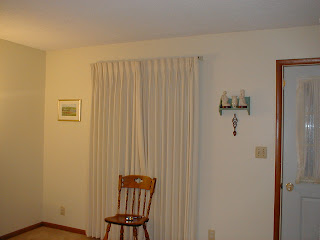 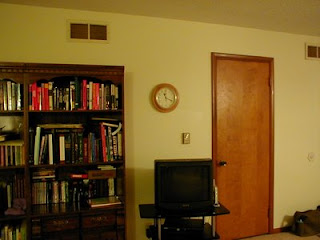 A few days ago I entered Gareth's bedroom after his nap to the sight of him jumping on his bed. Apparently he suddenly discovered that if he holds onto the sides of the crib he can get some good air and a great bounce. He thinks this new discovery is the most fun ever. Except when he occasionally bangs his head (just like in the nursery rhyme!) against the opposite crib rails. But it sure doesn't stop him from jumping some more.

I've taught Gareth how to give kisses. I'm attempting to get him to give kisses instead of biting (thankfully he only bites me and soft toys, but I wish he wouldn't bite at all). He seemed willing enough to give kisses while I was teaching him, but ever since the lesson he absolutely refuses to give kisses. If I ask for them he grins, shakes his head, and emphatically says, "No!". I knew the day would come when he would be "too old" for kisses, but I didn't think it would come quite so soon.
Posted by Erin at 5:47 PM 3 comments: