Nothing much going on here, just plugging away at life. The kids wrapped up the schoolyear, which felt like it flew by from my perspective. G will be doing driver's ed this summer and it was a shock to the system to realize they let kids get their permits/licenses so young here - there were multiple freshman taking their driver's ed courses during the schoolyear but I just couldn't even think about how to fit that into the school schedule.

Shortly before the end of the schoolyear M requested we attend Honkfest, which is essentially a bunch of street bands playing throughout the day. One of the after school care counselors was playing in a band, so hence the interest. I took him down to Columbia City to experience that. Very mixed quality of the groups. They had 3 bands playing at any given time, but spaced out such that it wasn't a cacophonous mess; we stayed for a while, got him some lunch, and then headed back home. 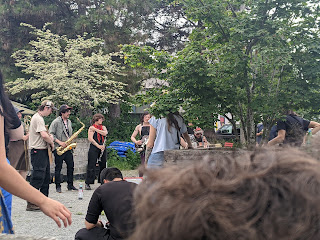 On Ryan's birthday we both took off work, thinking we'd go on a day trip somewhere. We had picked Bellingham, but then he didn't feel like driving - fair enough, a 2+ hour drive each way isn't how I'd want to spend my birthday either. A couple weeks earlier he'd asked if it was possible to walk all the way downtown, if one wanted to. I said I was sure you could and we confirmed on the map that indeed, you can do that. The weather was decent on his birthday, so he decided we should try it out. We ended up only going to Capitol Hill because our feet were a little sore by the time we made it to our lunch spot. Google wants to take you in a pretty direct line there, but that keeps you along busier roads and not far from I-5 at points and we wanted a more scenic hike. We opted to stay off the busiest roads for the most part, walk through UW campus and across Montlake Bridge. Things got a little hairy for a bit just after that due to all the construction on 520 - Google tried to tell us to go through some federal property that was very much not open to the public! - but we sorted it out and made our way to Interlaken Park. This felt like a proper foresty hike just nestled in a (super expensive) neighborhood. 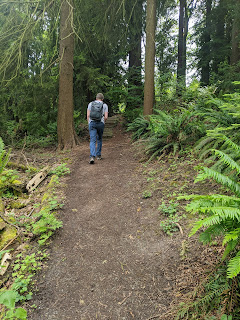 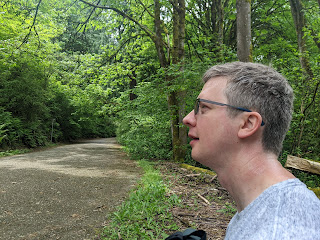 After winding through there, we went through Volunteer Park and then just a short bit further on to our destination. 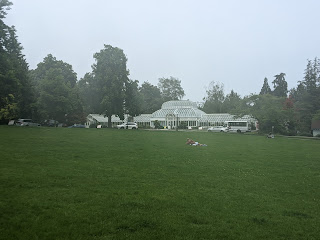 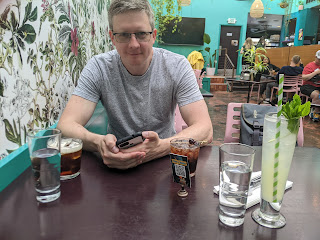 8.2 miles total. It really wouldn't be that much further to downtown from there, so maybe we'll tack that on another time. Opted for taking the lightrail home instead of walking back - not that walking back was ever under consideration. We didn't do much else to celebrate given we were tired and I had rehearsal that night. But this felt like a good celebration all on its own.
Posted by Erin at 4:41 PM 2 comments: