I decided not to buy another Lego advent this year, because they don't change all that much from year to year. So why not reuse it? Instead, I found a decent looking advent that we can put the Lego pieces in each year. I like that it has a variety of box sizes, some quite large, so we can put a variety of items in them if we ever decide to move away from the Lego scene. Of course, my kids' memories are way too good and at first they were kind of disappointed that everything was the same. But they got over it and still had a good time with it. Maybe we'll take a break from the Lego advent next year entirely and come back to it another time. 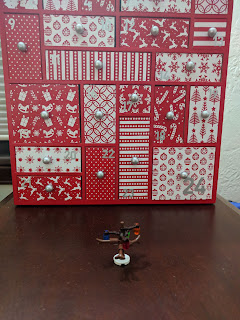 My mom always sends a countdown as well, which we've put up on the mantle the past few years. However, it felt like the mantle was getting a little overcrowded last year, so I needed to find a new place for the countdown presents. We decided to try out clumping them on either side of the fireplace, and I quite liked how that turned out. 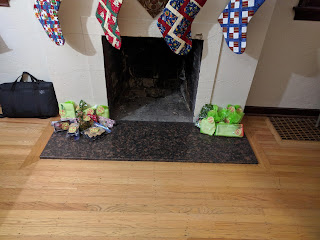 I actually did a little baking this year! Not as much as I aspired to, but in the end, I did all that was needed. I made some cranberry orange pinwheels, which I had made years ago in our Indiana days, but forgot if we liked them or not. I also tried out some chocolate-raspberry thumbprints. I've been feeling drawn to thumbprint cookies recently. We made them many years when I was little, and then we all got tired of them or decided we didn't like them all that well or something and stopped making them. But I found this recipe and they looked lovely (the recipe calls for a chocolate drizzle, but I was too busy to do that) and tasted delicious. The chocolate dough isn't all that sweet, which is good when you've got a heap of jam or nutella or whatever you want in the middle. A couple of holiday parties made quick work of the cookies, but we all got a few before they were gone. 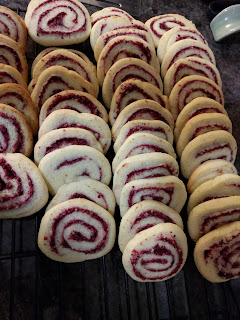 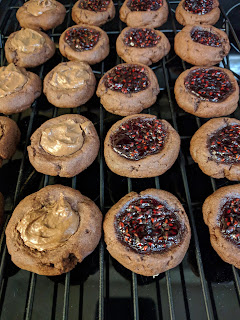 We received our traditional holiday grapefruit on the same day we went to get our tree. Tree selection was rather limited this year. I'm not sure if it's because we didn't get our tree until the 15th? But they had mostly blue spruce, which they wanted exorbitant prices for, and had very few noble firs and the prices on most of those were still well above what we remembered from past years. So we might have to re-think how we get our tree next year. But even with a little wonkiness here and there, it's been a lovely tree. 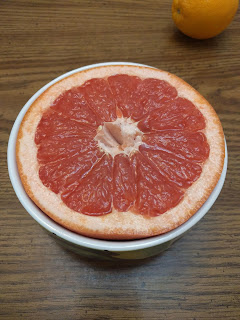 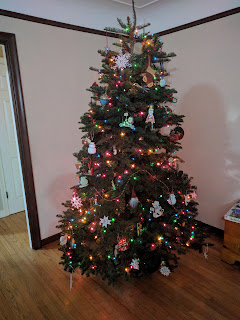 About a week before Christmas, Mal was being quite horrid. It really put a damper on things for me for a few days. We decided to set our expectations low for Christmas day and to return to having the kids select a present for one another, within a certain budget, to try to get him thinking about someone other than himself. So, the weekend before Christmas I took them out one at a time to the local toy store. I was pleasantly surprised that Mal did very well at remembering we were there to look for a present for Gareth and not for things for himself. And he even remembered things that Gareth had mentioned enjoying or wanting (they were out of his budget, but it was nice to see anyway). He also found a present for Ryan. We walked to the local coffee shop afterward for some hot chocolate and a gingerbread person and I told him many times how well he had done at staying focused on others. 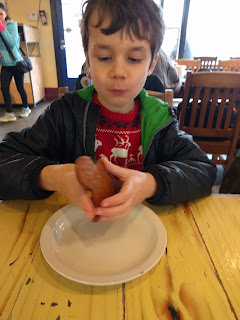 Before we knew it, it was Christmas Eve. We went more traditional for dinner this year, opting for the ease of ham. Then we watched our traditional movie, with hot chocolate for the kids, and then sent them off to bed. I made a ginger pear punch to go with our dinner, which was quite tasty. Similar to the wassail my family made growing up, but much less sweet. And served cold, not warm (though you could do either). I did not garnish the drinks with dried pear. No way was I taking up my oven for 2 hours to dry pear slices. It looks pretty in their picture, but not worth it just for a garnish.

Ryan and I had to stay up until midnight before we could even hope the kids were maybe possibly sort of asleep so we could fill stockings and bring down gifts. But eventually we were all ready to go. 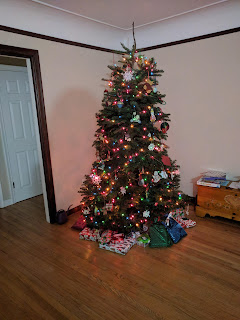 The boys didn't stir until 8am - they even stayed asleep when I went downstairs to prep some breakfast stuff! I thought for sure that would wake them up and they would be right on my heels heading back upstairs, but not a peep was heard. They excitedly waited for us all to be ready so we could head downstairs. Letting them watch something on my phone while Ryan and I showered helped with their patience. 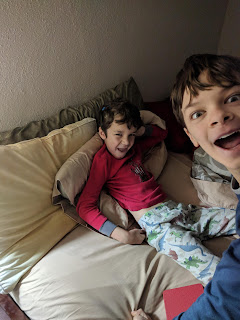 Waiting at the top of the stairs. Ryan and I spent Christmas Eve night wondering how much longer Gareth will have this level of excitement for Christmas. We know it'll diminish at some point; it's a little sad to think he (and we) only have a few more years before that happens. What you enjoy simply changes a bit, but it is always a bit sad to lose that butterflies in the stomach kind of excitement. 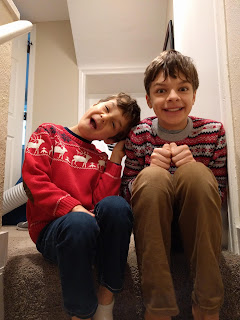 Not only did Santa eat the cookie and toffee we left for him, but he also solved a puzzle of Gareth's and left it on the cookie plate. 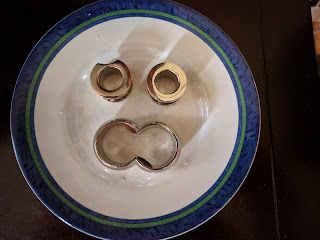 Stockings were opened. Breakfast was eaten (after cleaning up a glass that was dropped on the floor during preparations; Mal dropped his grapefruit bowl with grapefruit in it on the floor twice during breakfast - it wasn't the smoothest of mornings). The boys wanted to help themselves to presents, so we let them each take a turn picking a gift before I took over as the manager of presents. 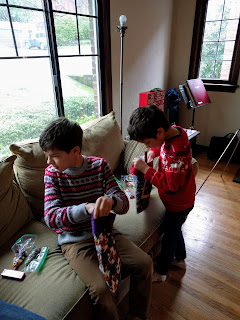 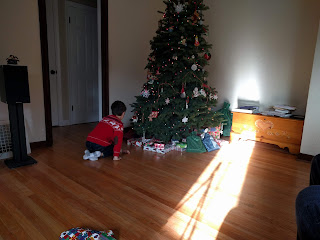 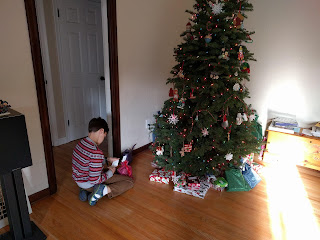 Mal was very pleased to receive the death costume he'd asked for. He spent the day alternating between being death and being the ghost of Christmas future from A Christmas Carol. It was very entertaining and he's worn the costume daily since. 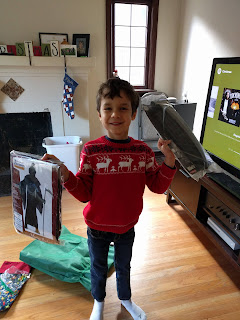 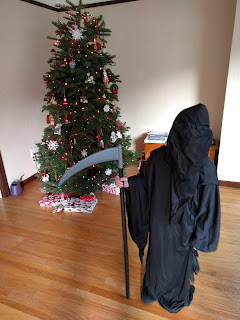 He also got a ukulele, which we've all enjoyed taking a stab at. 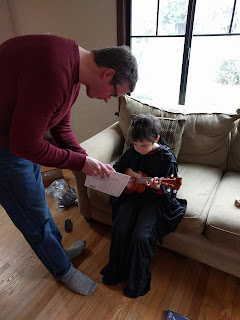 Gareth was very excited for the family gift of a Nintendo Switch. He got a little confused, because we'd opened some presents from his grandparents that were labelled as being from Mom and Dad. So when this was also from Mom and Dad, he thought his grandparents had sent it (increasing his shock because he knew how much the system was and had deduced on his own that he could put it on his wish list all he wanted - no grandparents or aunts/uncles would be getting it). We clarified for him that it was from his mom and dad, not from his dad's mom and dad. And Malcolm momentarily thought that because Gareth had opened it that meant it was Gareth's ("not fair!"), which we also quickly clarified by having them re-read the tag on the present carefully. 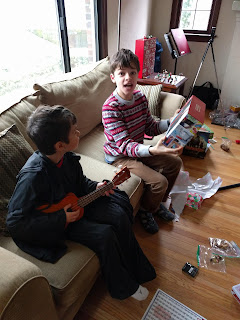 Malcolm, while eating some jerky, declared it to be better than everything. 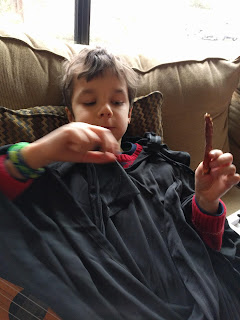 He also received a nether portal Lego set, which he immediately wanted to work on building. He makes great ghast noises. 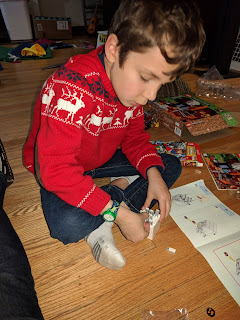 Gareth received a dot-to-dot puzzle book that is definitely not for little kids. This is one of the puzzles. Another has just dots and provides a compass and compass directions which you have to follow. 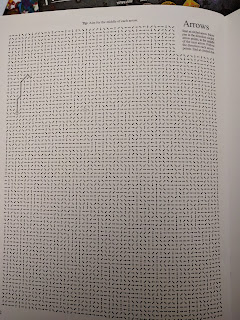 Ryan's gift to me was some UW gear. My family are not much into the school spirit thing - I've never been into sports teams, and I never had any high school gear outside of my marching band shirts. I never bought any BYU stuff (it was expensive and, let's be honest, it was my safety school that I wasn't always thrilled about being at - as glad as I am now for the many friends (and a spouse) I met there and experiences I got to have and the lack of debt accrued). But I absolutely loved my time at UW and had actually been toying with getting myself something for a while. I ended up with a coat and a sweatshirt.

The coat. The purple is out of my comfort zone, but the coat is comfy and generally very simple (simplicity is a definite requirement to get me on board with school branded gear; it also needs to not have a "Rah! Rah! Sports Team!" feel). And it's good to push myself out of my standard black from time to time. Also, do note the boys in the picture. We were only at the store about an hour, but they talked as though we'd kept them there all day. 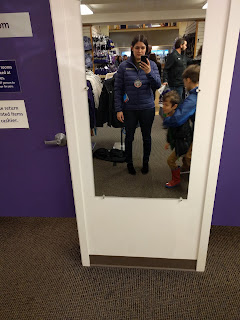 I look a little over-exuberantly happy over a sweatshirt here, but I was laughing at myself as I'm bad at taking selfies and wasn't expecting it to turn out very well. I think this is the only semi-decent selfie I've ever taken. How do people get them to turn out okay? It's a mystery to me. 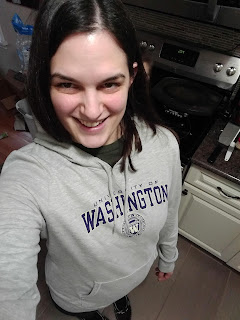 Ryan's made the most progress of any of us on the ukulele, given he's practiced the most. Mal is actually doing quite well considering his age and lack of musical knowledge (which is where Ryan and I have an advantage; Gareth has the advantage of his fingers not hurting since he already has callouses from violin). 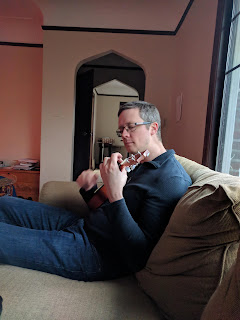 And that brings us up to date. We've been putting in some time on Mario Odyssey, which Mal isn't into. So now we've switched to more Super Smash Brothers, which he gets more enjoyment out of. This is pretty standard for him - he prefers games like Minecraft or Street Fighter on the computer and has not put much effort into Ori or games like that on the Xbox. We get another week of relaxation before everyone heads back to work/school.
Posted by Erin at 10:56 PM 4 comments: