Yesterday I rode in the Emerald City Bike Ride. This is only the second year they've held the ride; I missed last year because it conflicted with a concert. It was exciting to get to go this year and the weather was beautiful. This ride is a 25-mile loop that starts at the stadiums, rides the I-5 express lanes, crosses the 520 bridge, then comes back via the I-90 express lanes. It's not a difficult ride (no real hills), but gives you access to some routes you normally can't bike on, meaning you get some great views and experiences.

You can start the ride as early as 6 am, so I was up at 5 in order to get my stuff together and ride over to Redpath's in order to catch a (car) ride with them to the route start. Biking at 5:15 on a weekend with no car traffic around was so nice! I made it to Redpath's right on time, added my bike to the rack, and we were off. We started the ride around 6:30 and finished at 9 - leaving plenty of time for other activities that day.

I was grateful the ride started so early since we were going to hit the mid-80s yesterday - no one wants to be riding in that heat! Which was confirmed later in the day when Gareth asked to go ride bikes at the park. We were less than a block from the house before Mal was complaining about the heat. And when we got to the playground Mal rode his bike for a couple minutes before declaring it too hot. He played in the shade for a bit and then decided he could handle the heat and headed to the playground. Gareth rode his bike for a while, headed to the playground, and within a couple minutes came back declaring "That's not going to work for me. It's too hot." So he went back to riding his bike, but looked like he was melting while doing so. He took frequent breaks to sit in the shade and drink water. The trip ended when Mal fell on the blacktop and decided that one drop of blood meant he was going to die. Gareth said he was ready to go anyway - it'd only been 45 minutes or so since we'd arrived.


Hopefully my schedule allows me to participate in the ride again next year. I think it's one Gareth could do as well - there were quite a few kids around his age. He's starting to outgrow his current bike, so if we get him on a different bike and out riding a bit more during the next year I might try to figure out if I can bring him along.
Posted by Erin at 11:17 AM 1 comment:

We spent the evening with some friends last night. One of these friends, JR, is amazing with kids; he took our boys for the day when we needed to get a new car last summer and Mal was excited to get to see him all day yesterday. When we were done eating, JR offered to take Mal to look for dead crabs at the beach (it's been an obsession of Mal's since last summer when they saw some on the beach while we were buying the car; he often talks about how he's going to eat dead crabs with JR). And then it turned from just Mal to taking all of the kids and taking the all in the rain at that.

I wish I'd caught a picture of Mal when he got back. Wet curls, in a jacket a size or two too big for him (it'd been nice out when we left the house, so he borrowed one). He was quite possibly the proudest, happiest little Mal I've ever seen as he ran in, holding a plastic bag, and saying "I found a dead crab!!" It was seriously adorable.

We caught a picture later in the evening, when he was getting a little tired and didn't want to show his face: 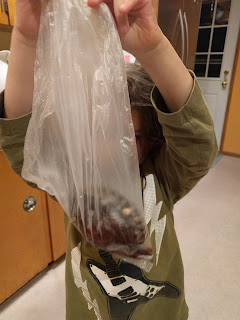 Then he took the crab out of the bag: 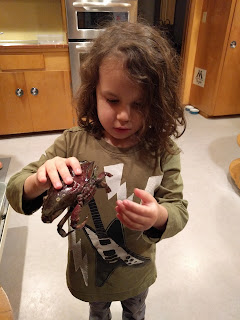 Don't worry, we made sure the out of the bag experience was brief. And that he washed his hands after putting the crab back in the bag. He was convinced that we could cook and eat the crab, but all the adults managed to get through to him eventually that doing so could make us sick. And I made sure to quickly shut down any ideas of the crab being carried into bed with him. He was convinced though that we could store the crab in our fridge. Thankfully, by the time we got home he was so tired he didn't notice that we didn't bring the crab in the house. And this morning when he asked about it I just told him it started getting really smelly, so we'd had to throw it away, which he thankfully seemed to accept.
Posted by Erin at 4:45 PM No comments: