On Mal's birthday I took the kids to Meadowbrook Pond. We saw a couple herons, lots of ducks, and heard a lot of birds. 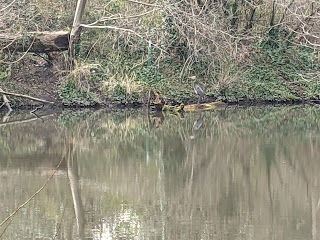 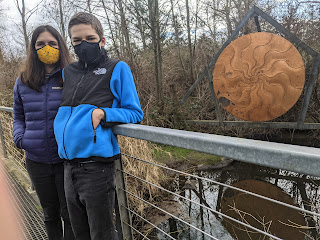 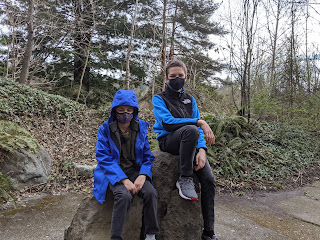 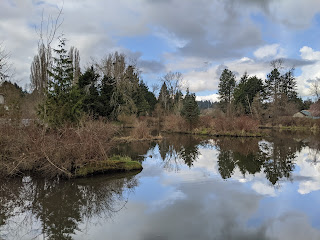 We made a minecraft cake again. 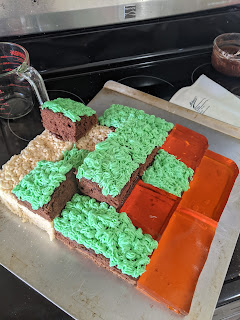 And got a whole slew of new stuffies - hedgehog, fennec fox, and niffler. They join Hobbes and the teddy bears to form what has been named the "Boopy Union". From what I can tell, the primary purpose of the union is to attack Gareth and smother him in stuffy love. 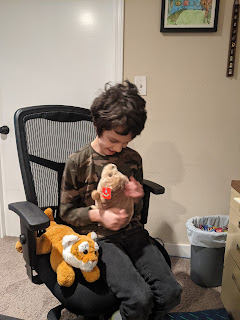 When I realized I was working the first weekend in March and therefore needed to take a couple weekdays off, I immediately decided I should get off for St. David's Day, if possible. It's been a few years since we've been able to do much of anything for the day, so I've been excited to try several Welsh recipes out.

I discovered this past weekend that no grocery stores in our vicinity carry ground mace! I can find multiple brands of juniper berries and a million types of mustard seed, but no mace. Thankfully one of our friends keeps a well-stocked spice cupboard and we were able to get some from them. And I know that Penzey's carries it, so I'll have to plan ahead and make a trip to Lynnwood to get some the next time I need it.

Not necessarily a Welsh recipe, but very Welsh-inspired: Potato-leek soup! A true cawl was feeling a little too ambitious to attempt while also trying other new recipes. Maybe some future year though. Softening up the leeks before adding the broth and potatoes: 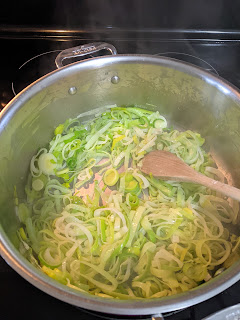 You blend it all up before adding cream and half and half. Tasty, and even Mal liked it! I started the day though by mixing up bara brith. I had forgotten to soak my fruit in tea overnight, but got it going in the morning, so it still got a good 8-9 hours or so. Then made up a stiff batter: 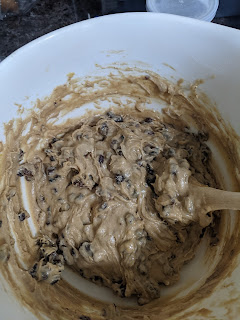 It turned out beautifully and smelled delicious. Mal definitely didn't like it, but Gareth loves it. I always get thrown by the flavor in things like this initially (I think it's the orange-raisin combo?). But really enjoyed it today after it sat overnight and had a lot of fun making it. Will definitely have to make it again and play with the ingredients (fewer raisins, more currants, maybe a little less orange zest?) 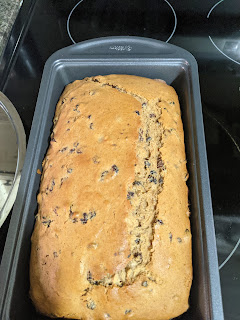 And, finally, pice ar y maen. These were very easy and everyone loved them. Mal, after tasting the soup and these, declared that we should find a Welsh store or restaurant to get more Welsh food from - a far superior response than I was expecting. Oddly enough, both these and the bara brith use the same spices and dried currants, so I'm not quite sure why these were much more popular (with Mal particularly). Regardless, there were minimal leftovers of the teacakes, so those we'll definitely make again. 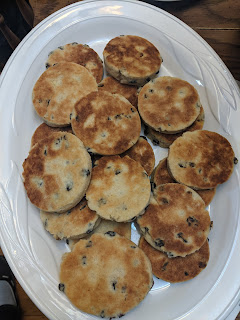 I also planned to make rarebit, but the blending of the soup took me longer than anticipated, so I left that for today. After a few moments of worry that it wouldn't work at all since my cheese sauce started to re-solidify so quickly, I was able to smooth it out again and get them put together. Gareth thinks we should try these with a Welsh cheddar instead of the English cheddar that I was able to find and I agree. The sauce started to split pretty quickly as it started to cool, so trying to make a second batch didn't work as well, though tasted okay still. Because of the addition of Worcestershire and stout, it's not the most beautiful-looking dish, but still very tasty! 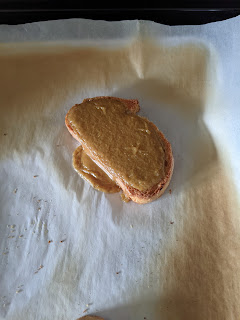