Well, I think anyway. Gareth is very attached to a certain orange blanket. We'd once previously partially detached him from said blanket, getting him to leave it in his crib all day and only use it to lay his head on while sleeping (he will scream for 2 hours, possibly longer, without falling asleep if he doesn't have the blanket - we've tried before). After tears upon leaving the blanket behind in the crib a few times, it seemed to work. He didn't care that he no longer had it to carry around. And the couple of times we tried to soothe him with it, it didn't work.

Then he mysteriously re-attached to it, apparently stronger than ever. And I just haven't had the will or energy to force him to leave it in the crib (read: I haven't felt like dealing with his crying), so I've let him become re-attached. At least we don't have to take it out of the house with us usually.

But over the past week or two he's become very difficult. For instance, he no longer willingly helps pick up toys in the evening, something he used to love doing. All he wants to do is sit holding his blanket and sucking his thumb. Tonight we had many, many tears trying to get toys picked up. At one point he even wanted to carry his new xylophone to his room, BUT, to do that required both hands. Which meant that even though he was still carrying the blanket over his shoulder, he wasn't sucking his thumb! Disaster! He couldn't even make it from our living room down the hall to his room without bursting out in tears (I could only assume because he wasn't sucking his thumb). He wants his blanket on his lap while he eats. I hate to think what will happen when I throw it in the wash, which needs to happen soon.

So, my question for all of you is, will I be causing my son severe emotional trauma and psychologically damaging him forever more if I force him to not have his "blankey" during the day? Or is it not the blanket at all and he's just exhausted from the pre- and post-holiday bustle? Or perhaps he just needs an earlier bedtime and is too tired by the time I start our usual bedtime rituals? What would you do, if you were me?
Posted by Erin at 6:51 PM 5 comments:

We hope everyone had a delightful Christmas!

At our house we took all day (and into the next morning) to open gifts. This will get a little shorter over the years, but is keeping with tradition on my side of the family. The Layton's always took turns opening gifts and took time with most gifts to discuss/explore the present before moving on, so even on the smallest of Christmases opening presents often went past noon. Gareth now gets pretty excited whenever we ask if he wants to open a present. We'll see if he remembers what that means when his birthday comes around.

We also enjoyed talking with both of our families, knowing that Ryan passed both of his classes this past semester, watching movies, and eating a delicious non-traditional holiday meal. Neither of us are big ham people and we'd just had turkey, so we decided to make chicken with asparagus in a white wine sauce (sans the white wine).

We purchased our Christmas tree yesterday! We ended up getting a smaller one than we'd planned on because we just couldn't bring ourselves to go with the Scotch Pine (which apparently is native to the area and therefore cheaper). Scotch Pines are bushy with super long needles. Because they're so bushy they look even shorter than they already are. The ones at the farm also had a very pale green color that didn't appeal to me. And, every time I looked at one I heard Lina Lamont saying, "I can't make love to a bush!" So, yeah, that wasn't going to cut it. All the fir trees are more expensive, so hence why we had to get a shorter one. But that's okay since we don't even have enough ornaments to fill what we got! 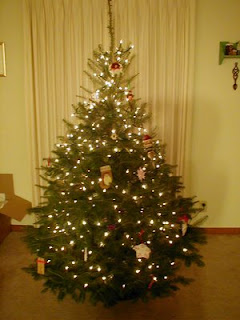 Getting our first ever Christmas tree has also helped us realize that we don't have many decent tools. We didn't realize until after we'd got the tree in the stand and put water in that we were supposed to cut off some more of the trunk so that the tree would actually drink. We waited for several hours to see if it'd be okay anyway, but it didn't drink any water so we attempted to do what we'd forgotten to earlier. But we only had a really, really thin saw blade - the kind that are fairly flexible - ring a bell anyone? Definitely not what we needed for the job. Halfway through the trunk it snapped out of the handle and we were left with a twisted saw blade. All we could do for the other half was try to drill (with a hand-crank drill) away some of the base. We succeeded in making a few small dents on the second half of the trunk before we decided to give up. At least our tree is drinking, albeit rather small amounts. Thankfully it only has to last a week. I think we'll try to actually own a decent tree-trunk-cutting saw by this time next year.
Posted by Erin at 5:42 PM 5 comments:

Every year growing up my Grandma would send our family a large box of grapefruit at Christmastime. Yes, grapefruit. And we all loved it. It has slowly become a favorite tradition that none of us can imagine foregoing. Ryan was introduced to it the first time he went to NJ for Christmas, and he fell in love with it as well (though he eats it with sugar, which I'm fairly certain none of us Laytons do). After we were married we spent our first Christmas in New Mexico, but we still found some grapefruit to buy because we couldn't have the holidays without it! Over the past few years we've made very certain that my parents promised to continue the grapefruit tradition, and sure enough, we just received our box of grapefruit. They even ordered us some "santa bowls" and grapefruit spoons along with the fruit. So over the next few days we'll be enjoying some delicious Texas grapefruit. Hooray!
Posted by Erin at 6:18 PM 3 comments:

On my way to teach a lesson yesterday I caught the tail end of this poem being recited on the radio (our NPR here has a poetry segment at that particular time every day). I think it might be the oddest poem I've ever come across. Even stranger than the one about fossilized fish.
Posted by Erin at 6:38 PM 2 comments:

Basking in the Holidays

I have been having so much fun getting into Christmas this year. It helps a lot that Gareth will actually be a little bit interested in what's happening rather than just chewing on the wrapping paper. And that we'll be on our own for Christmas for the first time. In past years it's been too easy to let the fact that we're going away become an excuse to not pull out our few decorations or to not do any holiday baking.

This year though, I'm on top of things. The few decorations we have that can be placed out of Gareth's reach are on display. The advent my mom sent is strung in garland fashion around our bookcases. I've baked gingerbread cookies, cranberry-orange pinwheel cookies, banana bread, and made fudge and toffee. (Our butter count so far is 2.5 pounds, but it'll soon be up to 3.5 once I make more toffee and gingerbread cookies!) If I were more poetic like my sister or sister-in-law, I'd write an ode to parchment paper, which has been much appreciated and adored during all this baking. All of the gifts are wrapped and ready to go under the tree or in the stockings on Christmas Eve. With the exception of a few hand deliveries, all of our Christmas cards have been sent out. We don't have a tree up yet, but I've purchased a stand and lights and materials to anchor the tree to the wall with (so Gareth can't pull it down) and we will go cut a tree down sometime this week (Ryan's in finals this week, so things have been a little busy for him). It's been years since I've been around for the tree cutting, so I'm extremely excited for this part. If we actually owned any holiday movies, I'm sure we'd be watching them (I'm shocked at this oversight in our movie collection!) And we've got plans to go to a friend's home for their Norwegian Christmas Eve.

We've also had the chance to participate in various community-related Christmas activities, which I think definitely contributes to my feelings of excitement and enjoyment. I've performed for our ward Christmas program and for a short Christmas program at a local assisted living community. And our ward was involved in a community Christmas Jubilee, which helps local families provide toys and a meal for their family for Christmas. I was able to help out when the families came to select their toys from the "toy shop", and it was one of the most fun service activities I've participated in in a long while. I was host to a girl whose son is about the same age as Gareth, so we had fun talking about our kids and her plans for the future.

So, I think we're shaping up to have a great Christmas. How about you? What are you doing that's bringing on the holiday spirit?
Posted by Erin at 5:25 PM 3 comments:

One Down, Many To Go

After 8 years I've finally finished the baby quilt I started as a Laurel project. In my defense, many of those years were spent with school eating away most of my time. Behold the product of my years of (on and off) toil: 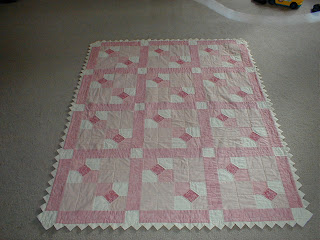 We can now have a baby girl.

And to end on another happy note, are these not the cutest things you have ever seen?
Posted by Erin at 6:30 PM 4 comments: 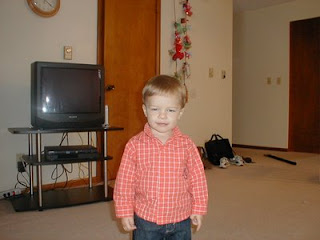 The last time Gareth received a trim was early July, so he was getting pretty desperate for a haircut (for a "before" picture just check out any recent ones in our photo album of him) . I am not brave enough to cut his hair myself yet since he's so wiggly. He wasn't happy while the hairdresser was cutting his hair, but I think he's enjoying having it out of his eyes and ears now that it's all over.
Posted by Erin at 7:21 PM 1 comment: