When the kids' schools were initially closed, Ryan had already been working from home for several days (and was daytime on-call, so was already stir-crazy). That first day the kids were out, I happened to be home since I was scheduled to work over the weekend. Things went okay, though the kids polished off what little work their teachers had provided in 20 minutes. We'd been told they'd be out for 2 weeks and I was banking on being able to just skate by with those 20 minutes in the morning and not worrying too much if they had a couple weeks full of screen time. But the next day, it was extended to 6 weeks and Ryan texted me before I'd even headed off for rounds to let me know that the kids thought they should just play video games all day. I'd been hoping to get through the weekend to my next day off (Monday) and be able to spend some time then coming up with a plan for the 6 weeks. It quickly became apparent that, to give everyone's sanity some hope, we would need to come up with something that night. So we spent some time coming up with a basic schedule and then lists of outdoor/physical activity ideas and "approved" indoor activities. 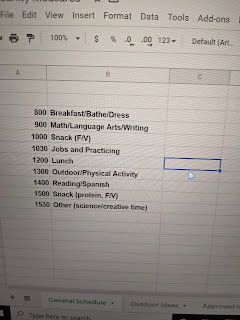 Seemed to work decently for the first few days. While I was off the following Monday, our director sent out an email telling our department to start preparing to work from home. I went in Tuesday, covered my service as usual, and then started packing up anything I might need for home. We've been figuring things out all together ever since.

The schedule quickly started to fall to shambles, since neither Ryan nor I had capacity to regularly check in with the kids. After a couple weeks, we sat them down, re-instituted the schedule (including setting "school bells" on Gareth's phone) and added on a requirement that they write a report/message to us daily - 3 paragraph minimum for Gareth, 3 sentence for Mal. It's been working decently well, though Mal prefers to write 3 short sentences telling us three things he ate that day.

On that Monday off, I took the kids to Kubota Garden since I knew it'd likely be empty. We saw 4 or 5 other people while there, but mostly from a distance. 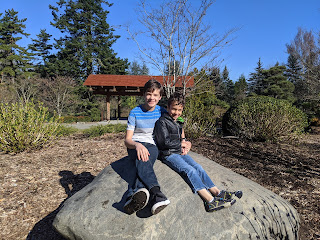 I'm not sure if the garden is still open or not, so I'm glad we got the trip in early on (and that it was safe to do so - if the parking lot had been crowded, I was prepared to turn around and go home).

A couple weeks later was Mal's birthday. I'd been hoping to give him an actual birthday party this year, but obviously those plans got waylaid. We did have Emily and Daniel over (Mal and Daniel share a birthday). The governor had just announced the stay at home order that afternoon/evening, but we didn't hear about it until they were already on their way. So we had our celebration and then said goodbye for the near future. Mal had requested an apple pie, since we had said we'd make his requested Minecraft cake when we could actually have a friend birthday party. 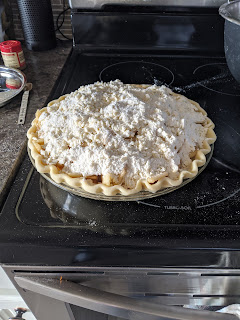 The pie was delicious, but because it was so full, it definitely overflowed in the oven, making a big mess. Then I set it on the stovetop to cool while we ate dinner. Of course, it wasn't cooled completely by the time we were ready to eat it. The only candles we had were some thin, sort of squiggly ones Mal had picked out a few years ago. Not even thinking about the pie being a little warm still, I started sticking them in, wondered why they were so unstable, then realized they were melting from the bottom up due to the warm pie! I quickly lit the candles and tried to lift up the pie to carry it to the living room where Mal was video chatting with family, only to realize the overflowing juices of the pie had cooled and now the pie was firmly stuck to the stovetop. So I ran to the living room and told Mal he had to come do candles right that instant before the candles melted entirely away. It added some nice comedy to the evening. And I didn't manage to get any other photos.

About a week or so in, I suggested to Mal that he use some free time to build a fort. Initially, their fort was making basement bathroom and laundry access difficult, so I had them move it into the music room. They've been sleeping in it ever since. Ryan's asked a couple times how long we're planning to let the fort stay and I just shrug my shoulders. There's not really any good reason for them to return to sleeping in their room at the moment. 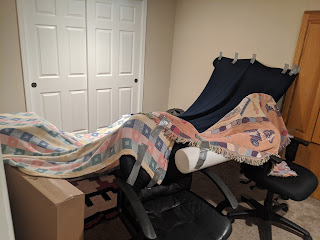