We picked Gareth up from Camp Quest today - final year he'll be headed there alone, as Mal will be old enough to go next year! (Yes, I am already thinking about what we should do during our kid-free week!) Gareth had a great time, as usual. To add a little extra fun to the drive up and back, I decided we should head to Samish Bay Cheese, which is only ~10 minutes away from camp.

You have to give yourself a self-guided tour, so we started off heading to the sheep. 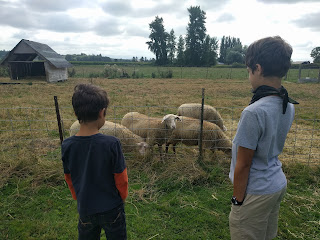 Mal and Gareth both got a kick out of the sheep braying loudly at them. After a while, the sheep lost interest since the kids were just staring at them. We couldn't see any pigs, and there wasn't any noticeable activity in the production room (it is a Saturday after all, maybe not a bustling as other days?), so headed to the tasting room. The boys and I tried all the cheeses they had out (4 of them, plus a dip which only Ryan, Gareth, and myself tried). I was shocked Mal was willing to try anything - it helped that two of the cheeses were gouda (smoked gouda is the only cheese he likes). We ordered a cheese board and a couple slices of cheesecake to share and purchased some of the spicy cheese dip to bring home. I think this will become a new camp pick-up tradition. They make yogurts and lots of other things as well, so we have more we'd like to try.

One of the women working asked if we'd fed the sheep - we hadn't since I wasn't sure if that was okay or not. She said they like it when people feed them grass. The farmhand lives on site and we were told he spoils them, giving them all his leftovers. We headed back over to the sheep and sure enough, they were thrilled when the kids offered them grass to eat. We also found the pig and her piglets. They were resting in their shelter, piglets focused on drinking milk, so didn't come see us. There was also a little more activity in the production room at this point - they were straining something through large swaths of cheesecloth (clearly I don't know much at all about cheese making!) 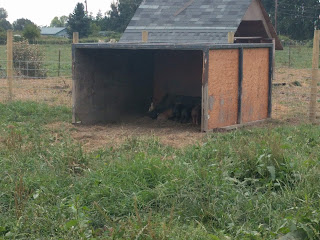 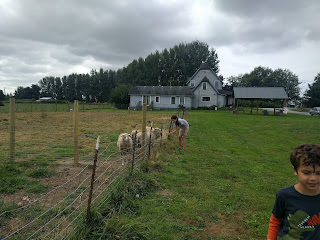 Definitely a worthwhile side-trip!
Posted by Erin at 6:45 PM 2 comments:

Mal has been loosing teeth left and right the past couple weeks. He started with a couple lower teeth, then (after many tears and worry while trying to eat dinner as it kept hurting while he tried to eat, but he wasn't willing to let me attempt to pull it), an upper tooth fell out. 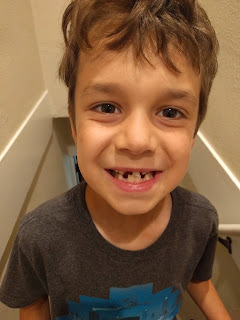 Then the other upper tooth was super loose. He kept getting scared because it was getting stuck sideways and backwards - I expected it to just fall out the first time I helped him fix it, but it hung in there until the next day. It came out the day after the other upper tooth. He's having to get a little creative with eating, since it's a little hard to bite into things with all those missing teeth! 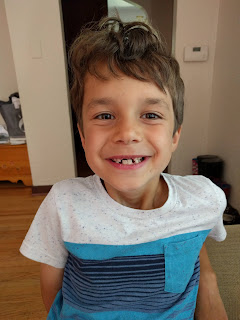