I just came across a couple of different methods for dying eggs with onion skins - here and here. We are definitely trying this out next year! Thanks, Kristine, for sharing the idea!
Posted by Erin at 10:11 PM No comments: 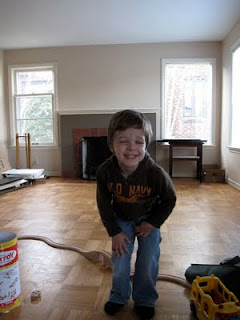 Gareth was pretty excited for his birthday this year - now that he's fully aware of what presents are and that he gets them for his birthday and all that good stuff he gets way more excited for things like Christmas and birthdays.
We were debating whether to get him a bike or a small drum set, but the bike won out. We'll save up for a small drum set for him along with saving for Ryan's and buy that at the same time that we get Ryan's. Initially I was thinking he'd be too big for one of those balance bikes, but when we went to their site after everyone kept telling us that was the way to go, we discovered that we could purchase an extra-long seat which will hopefully enable the bike to last almost a year. Hopefully by that point he'll be ready to go to a regular bike (maybe even without training wheels).
We had a playdate/lunch with our friends from the summer a few days before his birthday, which was especially exciting for Gareth since it'd been a while since he'd had a chance to play with other kids. Then on his actual birthday we kept things pretty relaxed. 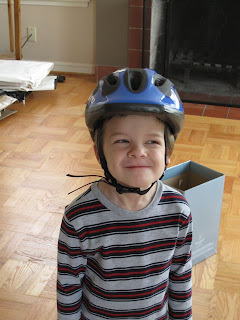 We gave him his helmet in the morning and helped him find the bike down in the garage. He hopped on and off we went to the park. (Notice the overgrown, nasty-looking grass to the right in the picture. Hopefully it'll be chopped back tomorrow.) 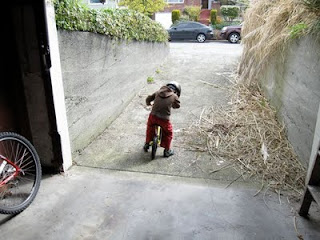 He enjoyed playing at the park with another little boy, who we discovered will be in his preschool class in the fall. After a bit, the boy's parents invited us over to their house for some coffee cake. We enjoyed chatting with them while the boys played. Then it was back home for a late lunch and some playing. Ryan took Gareth out for some more riding while I made dinner. 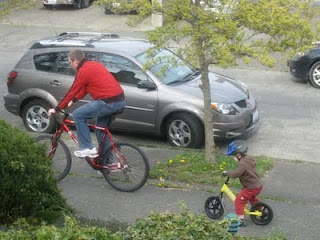 After chatting with family for a bit, he opened presents and we had some strawberry smoothies for dessert (I was planning on making pound cake, but it didn't happen). 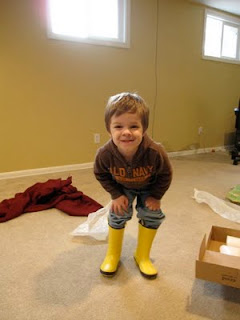 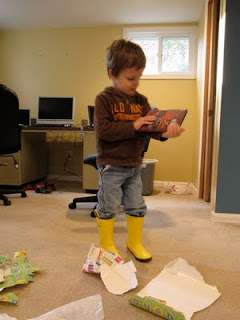 As you can see, a couple of his other gifts were yellow rain boots and Cars. Oh, and he's really into crouching down when you take pictures of him. Gareth's been out riding every day because we've had an unusual entire week of sunshine. We'll pay for it this next week with an entire week of rain (not so unusual). All the good weather means that he's improved rapidly with the bike and can even coast for brief periods now.
Posted by Erin at 8:01 PM 2 comments: 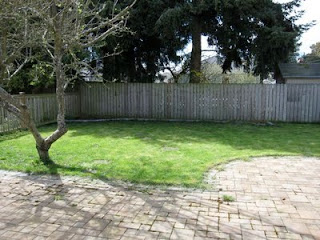 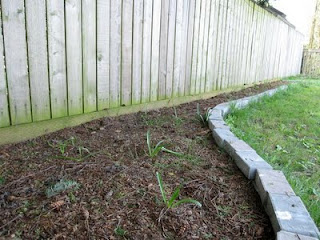 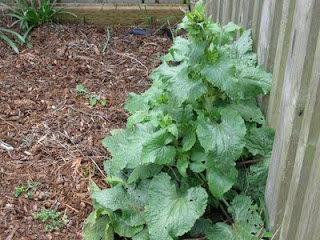 It looked a little too like an intentional planting for me to be willing to pull it up, but there were some pretty large weeds in the beds...
Posted by Erin at 8:49 PM 7 comments: