Ryan and I had the opportunity to see "Food, Inc." recently. We both read The Omnivore's Dilemma this past summer (I became interested in the book after a book group discussion of Animal, Vegetable, Miracle) and not too long after I finished it we first saw the trailer for "Food, Inc.". Since it was a movie I'd been wanting to see, and it was a free showing at the local Unitarian Universalist Church, and since Ryan and I very rarely go out these days, I was quite excited.

We enjoyed the movie. It's obviously biased in some ways, but since the other side typically refuses to be interviewed that can't be helped entirely (though I'm betting refusing to be interviewed can definitely be the smart move since it's likely you'll be portrayed in a negative light no matter what). I thought it was very thought-provoking. It left me thinking primarily about two main things - what are we eating/what can we do to eat healthier food and what can be done to help people with less money afford and know how to eat better?

So, here are some of the things Ryan and I have been doing and would like to work towards in the future:

-After Ryan and I read The Omnivore's Dilemma we decided to try to avoid CAFO/corn-fed beef. We now buy our beef and pork at the Purdue Butcher. Eventually we'd like to save for a large freezer so that we can purchase a quarter cow from a local farmer and have our beef for the year.

-We've tried to cut back on our meat consumption overall. Obviously, during the winter we eat more than in the summer since the produce availability is lessened. Previously we were eating about 50/50 meat/non-meat meals. We've cut that back to around 30/60 or less during the summer and try to stay slightly under the 50% mark for our meat meals in winter. (Not only is this healthier, but it's more in line with the Word of Wisdom!)

-We buy as much local produce as we can. This past summer I went to the Farmer's Market weekly and bought everything I could of what we needed there.

-When we one day own a house I hope to have a large yard so that we can plant a garden. Raspberries, blueberries, gooseberries, and strawberries. Also enough tomatoes to eat and to can. Lettuce, chard, peas, green beans, squashes, carrots. We may even try out onions, potatoes, and garlic eventually.

-We're trying to eat more seasonally. Tomatoes grown thousands of miles away in the middle of winter, picked when not ripe, then artificially ripened just don't taste as good. So why buy them? We're certainly not perfect at this yet, but we're working on it. Not only does it make our meals taste better, but it lessens our footprint on the environment.

-We're hoping to gradually wean ourselves off of those big, fat boneless skinless chicken breasts from the store and buy locally raised chickens. Which means learning how to use the entire chicken. It'll take some time, but the results will hopefully taste chickenier (and be kinder to the chickens.)

-We'd switch to local eggs now if we could get our hands on Polyface farm eggs. (Our Manassas readers will have to go buy them instead - last I checked Polyface farm comes to a farmer's market in Manassas, you lucky people!) Reading the chefs in Omnivore's Dilemma rave about them was startling. I'd always thought an egg was an egg. But apparently not. So, when we have a little more income we'll switch over.

One difficult thing to realize is that you can buy lots more calories for a lot cheaper when you buy foods that are unhealthy. Which is part of why we have an obesity problem. I think we could help poor people out by making the food stamp program run more like the WIC program. No more buying conveyor belts full of candy, soda, or chips with your food stamps. Really making people use the money to achieve a more well-balanced diet. When you're on WIC you're required to go online and complete a lesson about nutrition and how to feed your family well every time you go in to pick up your checks. Expanding that to the food stamp program would help as well. That's the main idea I've thought of. I don't know how many schools still have home ec. classes where they teach cooking or not, but that's another thing that could help. If kids feel like they can cook when they get out on their own they will be more likely to do so. Of course, if we stopped subsidizing all the surplus corn that becomes high fructose corn syrup, that'd help as well.

After the movie Ryan and I mentioned to each other that there are thousands of causes or issues such as this one that we all have a choice to care about or not. This happens to be one that we've decided is important for our family. There are others we don't worry about as much. It's simply not possible to take on all the issues. So, what are your thoughts? What do you choose to care about and why? If this is one of the issues you care about, what ideas are you implementing in your home?
Posted by Erin at 11:28 AM 7 comments:

Now that they're over, I figure I'd best get around to writing about them. We stayed home for Christmas again this year, partly because it's so relaxing and enjoyable to not travel and partly because we embarked on the potty-training adventure (which has gone really well and that's all I'll say about it so you don't have to read a TMI post).

Thankfully Ryan's semester was not as stressful as last year's, so we were able to purchase our tree at the traditional time for my family - the weekend of my sister's birthday. Gareth had a great time. Every tree was "too big tree" unless it was 2.5 feet tall and the owner of the tree farm even let Gareth "help" cut down the tree. Too bad we didn't have the camera with us! Here's the final result: 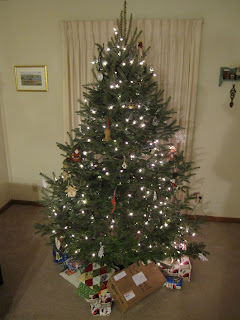 My mom sends us little gifts for an advent each year, which Gareth gets really excited about opening, even when the gift is a washcloth or a pair of socks for someone else. (We have an awesome video of Gareth and Ryan playing with socks, but I have to figure out how to upload it still. ) My advent gifts that I look forward to are the ornaments that she and my dad make for us. 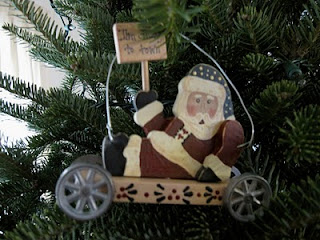 These is one of the ornaments they sent this year. Gareth had a great time playing with the "car Christmas" (he tends to call Santa Christmas).

My brother and sister-in-law were able to come up and join us for Christmas weekend. Lucky them, they got to be here for the most snow we've ever seen in our two winters here! (It was only 3 or 4 inches, but that's way more than we ever had last year.) They arrived Christmas Eve in time to catch the end of the George C. Scott version of A Christmas Carol, which is a tradition from Ryan's family. We finally broke down and decided we couldn't go another year without it and purchased it - our splurge of the season. Gareth, of course, enjoyed the extra attention of two more adults and even climbed into bed with them one night, which meant that no one slept well.

Christmas morning we took our time getting up and ready. My family's traditional cinnamon roll breakfast is too sweet anymore for us old fogeys, so we always make Ryan's traditional breakfast - blueberry breakfast bake. That and some Christmas grapefruit are a delicious combination. Then we commenced the gift-opening. For this part we follow my family's tradition and open gifts one at a time so that we can all see what everyone else gets and to stretch out the fun. Gareth could have been content (not truly understanding what happens on Christmas) with his first gift, a Lightning McQueen car. He carried it around all day and had to have it at naps and bedtime. He received lots of puzzles as well, which he enjoyed dumping out and leaving for others to clean up, which is what he also did with his new Hungry Caterpillar game. 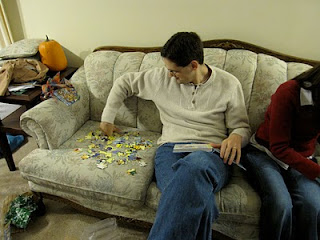 He's since started to figure them out and is playing with them more and more. He also had fun playing bowling and trains: Auntie Cinira and Uncle Matthew gave us Polar Express and it is Gareth's new favorite movie. I should have known, since he loves trains so much. Yes, the rest of us received gifts as well, but that's just not as interesting as a cute kid, now is it? Matthew and Cinira introduced us to a cool card game called Bang. Christmas was full of late nights and good food and fun.

Ryan and I love to do puzzles at the holidays, so of course we had to purchase three new puzzles (since we don't have tons yet). 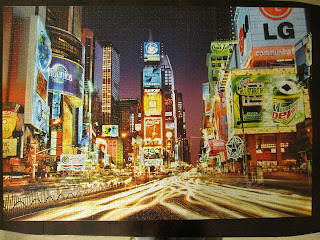 This is our challenging one for the year. 2000 pieces. We almost finished it in time for the New Year, but ran out of steam on the sky, so we finished it the next evening instead. We've had a wonderful holiday and hope all of you have as well. And, since it'll probably be another month or so before I get around to posting again, here are some pictures of Gareth enjoying having his Daddy home: 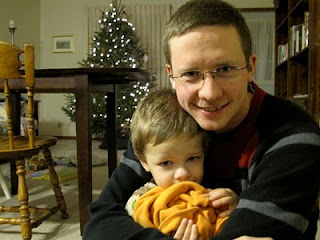 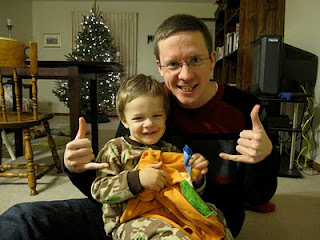 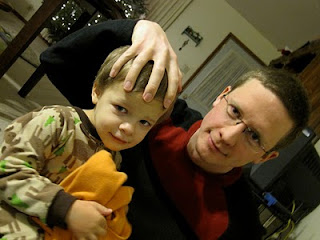