It's been a busy month! I started rehearsals for both of my music groups, the kids got settled in school, and I started classes at the end of the month.

With the help of my mom, Ryan and I had selected some shades to replace the paper ones covering the living room window. After she left we were working on getting measurements made to put the order in. Then when I went to go make the order we ran into some snafus with the size of the window and the particular brand we were wanting. So we went back to square one, contacted a local window treatment company that does in-home consultations, and they were able to get out to us pretty quickly. We felt like they knew what they were doing better than the Home Depot people, so we ordered through them instead. They didn't try to upsell us to the highest cost product and were able to show us better how the shades would look with our type of window. The shades were ready to install before I was expecting them to be, with an installer who was done in no time, where I would have fussed and stressed for hours if I'd tried doing it myself. 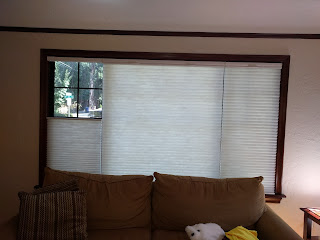 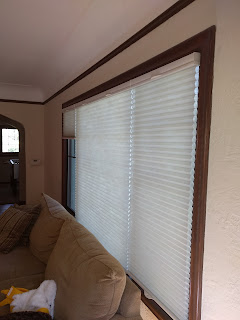 They look so nice, and I love not having to deal with clipping the paper blinds up and down anymore, as well as being able to lower them from the top if I want. Now I'm really excited for when we can get around to (afford) to do the rest of the windows. The company already has the other measurements, so when we're ready we'll give them a call and just have to make style decisions.

The other big news of the month is that Gareth selected violin as his instrument to start in school. 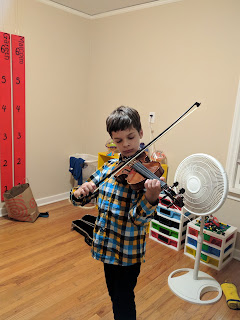 They only get 20 minutes per week, but it'll be a decent enough introduction I hope. He's been enjoying pulling it out and seeing what he can figure out. We'll see how long the excitement lasts. I give it about a week before he's not practicing at home anymore.

Malcolm has been upset with us all pretty regularly since the violin entered the house. On the way to the store when it finally sunk in that we wouldn't be getting anything for him. On the way home from the store because we didn't get anything for him and therefore he has and is nothing. After arriving home, because the violin was too loud while he was trying to watch a show. And because we won't let him open up the case and play with it whenever he wants. Don't we know that he has rehearsal and it's a long rehearsal and he needs to play the violin?? 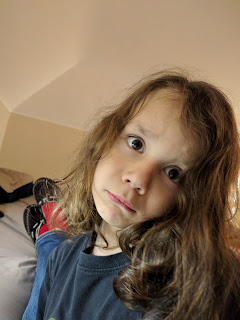 The first couple weeks of September were filled with attempting to prep for the next year. I've made several dinner dishes that I've stowed away in the freezer, to be used at some point this quarter, including a delicious beef stew. 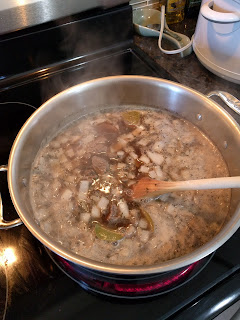 I got a few breakfast foods done as well, but not enough so will have to make more periodically throughout the quarter.

And I finally got the blackberries cleared from one of the front gardens, at least as much as possible. Then I trimmed the bushes so that I could get a ladder in between them and clean out the gutters. 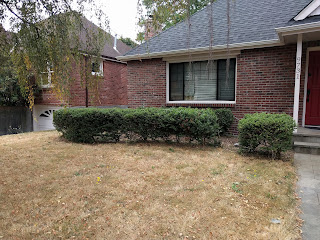 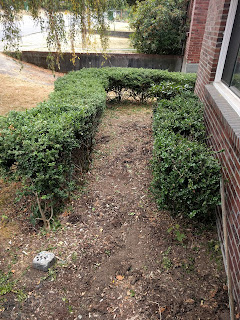 Turns out, not cleaning out your gutters for a couple years is a great way to make compost. There was some lovely, rich-looking soil I pulled out of those gutters. My favorite thing, though, is that I'll no longer have to listen to rain pouring over the gutter corner by the front porch. There are still some sections of gutter to clear, even in areas we did clear last year (all our trees are horrifically messy), but I need Ryan's help with moving the ladder to do that. Mal had fun climbing up on the ladder though, and even helped clear out some of the gutters!

It turned chilly one weekend, so I took the boys (separately) to get some winter clothes. With Mal, I was exhausted after 5 minutes. All the shirts were "too dark" and he only had eyes for hats and slippers. I finally convinced him to choose some things to try on. Of course, the thing he really needs - pants - we only found one pair that fits, even when you account for adjustable waists. Most that fit around the waist are too short, while anything that's long enough drowns him in the waist. But I wasn't about to go to another store with him in the same day. So I took him home and picked up Gareth for his turn. Took this picture while waiting for Gareth to illustrate to Ryan how much easier shopping is with a 10 year old than a 5 year old: 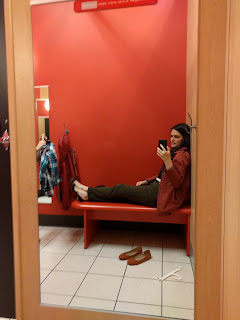 Still, I was exhausted when we got home and took a good nap.

The first week of school was a honeymoon period with Mal and school. The next week we entered the "I want to murder Mal every morning" phase. One morning it was because he wanted the pirate shirt and then, never mind, he wants the dinosaur shirt. But then! The letters on the dinosaur shirt come too close to his neck and scare him! And the sleeves on both sizes of rain jacket available to him make him "not perfect" and he wants a sweater instead of a jacket (but you'd better send the jacket for when he inevitably freaks out about the rain getting on his head). And there was something poky in his shoe, despite my taking the shoe and sock off twice and thoroughly checking for all things poky. As he waved mournfully until he could no longer see me while walking into the building with his class, I could only be grateful that his teacher gets to deal with him all day and not me.
Posted by Erin at 12:52 PM No comments: