Halloween was quite successful here this year. We, once again, didn't get honey popcorn made, but we did manage to carve one pumpkin (we still have one waiting to be carved) and I got costumes done in time for both boys, I was able to "help" (mostly I just chased Malcolm around) at Gareth's school Halloween party and we took both boys out trick-or-treating.

Gareth was interested in a Mario costume last year, but I didn't want to buy something that I could so easily make myself, so I suggested we do Mario this year instead. I found a simple pattern for the overalls here and an equally simple pattern for the hat here. Had a couple stressful days when I thought the hat pattern was way too small. But it turned out that it had simply printed as though it was a 4x6 picture rather than a full page. Once Ryan re-printed the pattern the right size they went together super quickly. Knowing Malcolm wouldn't tolerate a mustache or gloves (heck, he wouldn't even keep the hat on), we opted to dub him "baby Mario" and Gareth was big Mario.

The pumpkin is, as usual, of Gareth's design. Maybe in a year or two we'll let him start helping with the actual carving. He did quite well as scooping out the goop this year, and then he removed the seeds from the goop while Ryan and I carved. Once he tired of seed removal he had fun stabbing the portions of the pumpkin we'd already cut away. 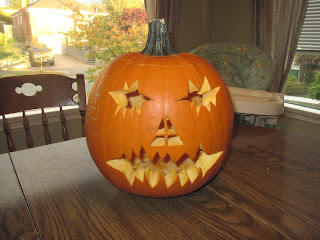 Gareth's class held their party at the end of the day, so I was actually able to attend. They played some games, had huge cupcakes with a ridiculous amount of frosting on them (which they proceeded to decorate further with candy) and got to show off their costumes to their class. Gareth had a good time, as did Malcolm. 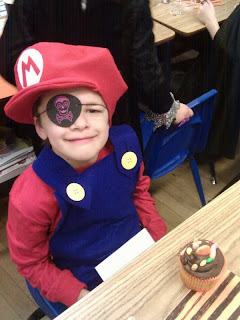 Malcolm loves the stuffed animals in the classroom, particularly this pink bear. I think it's a bear. Maybe it's a pig. Whatever it is, it's usually the first one he goes for every time. 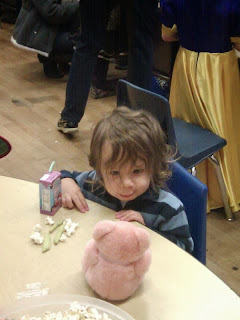 Juicebox heaven. First time having a juicebox and popcorn. He was a very happy camper. 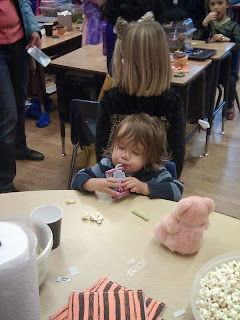 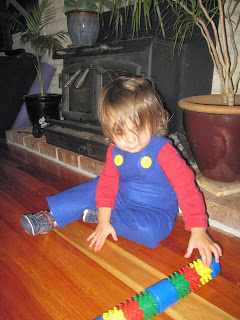 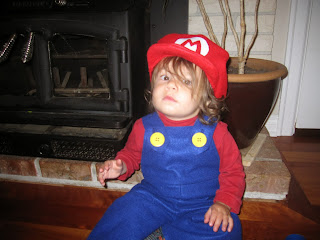 We only let Malcolm do a few houses before bringing him back home. He mostly enjoyed being allowed to run free along the sidewalk. He did go up to a couple of houses and melted the hearts of one couple when, after they gave him some candy, he tried to hand them a Twix bar still in his hand from the previous house. He was in a very happy mood on the way home.

Gareth, with his haul. You can't tell very well, but I cut the scalloped shape in the mustache. It was a bit wide, so he ended up with some fuzzy stuff in his mouth, but he survived. He got several pounds of candy, I'm sure (we haven't weighed it, but it fills our largest mixing bowl). Gareth enjoyed running around with his gang of friends and declared it the "best Halloween ever!" before going to bed. 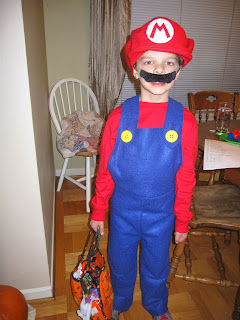 Last weekend, while I was playing at Benaroya, Gareth had his final soccer game of the season. One of his best friends was on the opposing team, so we arranged for them to pick Gareth up and take him to the game and to his team's end of season celebration afterward.

Of course, the one week that I'm not there is the week he scores his first ever goal in a game. And he didn't even bother to tell me about it when he came home! I have a feeling that if I'd been at the game he would've been super-excited about that goal in the moment, but I guess all the ice cream and arcade games and playing at his friend's house afterward overshadowed the goal or something.

His coaches came up with certificates for everyone and here's what Gareth got: 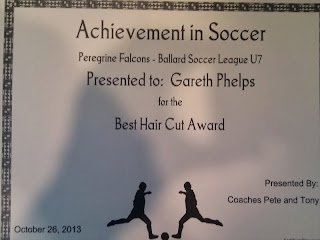 Yup, his coaches along with just about everyone else were pretty shocked when he showed up with his hair cut. It seems to have been a good season - despite tears of frustration at times, Gareth usually enjoyed himself, the coaches were great with the kids and Gareth is already talking about trying to play on the same team as his friend next year.
Posted by Erin at 1:22 PM No comments:

As most of you know, I play with the Seattle Philharmonic, a local community orchestra. The group has played their concerts at UW's Meany Hall for decades and were disappointed to learn last spring that the university had decided that no non-UW groups would be permitted to use the hall while UW is in session. We learned this rather last minute, after our date requests had already been submitted for this season. We were able to work our last two concerts into their spring break and after they're out for the summer, but the first two needed to move elsewhere. Apparently (I really have no idea what options are available around here), the only other viable option that would give us a hall as good as or better (in this case better) than Meany Hall would be to use Benaroya Hall (where the Seattle Symphony plays).

I have yet to make it to a Symphony concert (or any other program held at Benaroya), so I'd never been to the hall at all. Yesterday was our first concert there and it was pretty awesome. I was a little nervous - mostly that everyone else would get nervous and the whole thing would flop. There was some pressure on us all as Benaroya costs our orchestra significantly more than Meany does. We needed this concert to go really well so that people would want to come back and hear us again. And we needed to sell a lot of tickets to this concert to be able to pay for it. 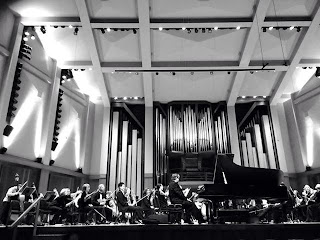 In the end we had about 1500 tickets sold, pretty well filling the floor and the first tier, and I believe more tickets than we typically sell when we play at Meany. We weren't even planning on opening up any of the tiers initially, so we were pretty excited when the people at Benaroya asked if we could. And it was a perfect pre-Halloween concert. Rachmaninoff's Isle of the Dead, Hermann's Concerto Macabre from "Hangover Square" (a pretty decent film actually and the concerto itself is really awesome), Liszt's Totentanz, Chopin's Funeral March (orchestrated by Elgar), and Mussorgsky's Night on Bald Mountain (the Stokowski/Fantasia version), with Gounod's Funeral March of the Marionette for an encore. The piano solos were superb and I really liked the Rachmaninoff. Not everything went perfectly - to be expected when you're playing in a hall you've never played in before and everyone's still getting used to it, but overall it went really well. When people made mistakes they seemed to cover them pretty well, and the audience seemed to really enjoy it. I think it'd be fun to do a Halloween-themed concert every fall - there's plenty of death-themed music out there, so it wouldn't be too hard to come up with different programs each year. 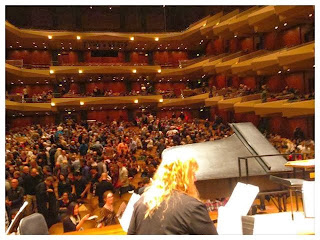 A good way to start out the season - hopefully our Scheherazade-themed concert in January goes as well or better!
Posted by Erin at 1:10 PM 3 comments:

Gareth, trying to kick a ball around. 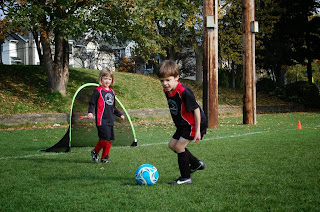 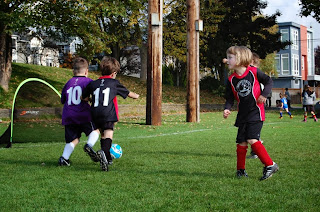 It may look like he just kicked the ball, but I'm pretty sure that's not the case. This is how he typically spends a good portion of the game - playing in his imaginary video game world, semi-oblivious to what's happening around him: 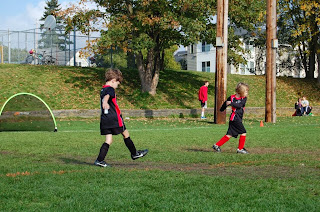 He's actually come really close to scoring a couple of goals this year, but it seems we've spent enough time getting him to keep the ball close/dribble rather than just kick it as hard as he can so now he's not willing to give a hard kick, even when the goal is wide open just a foot away. Trying to dribble the ball all the way into the goal usually means the other team catches up to him and gets the ball away just before he gets it into the goal.
Posted by Erin at 12:11 PM No comments: