In these last couple weeks we've kept busy with the usual holiday trappings. We started by opening a variety of advent presents each night. 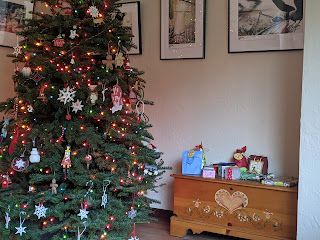 Ryan ate the first grapefruit of the season: 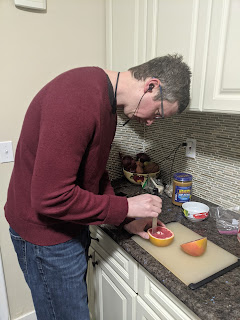 We ordered our usual bushel plus my brother and his wife gifted us a quarter bushel. Which has turned out to be a good amount to have. Mal ate 1.5 all by himself one morning! Gareth suggested that as they get older we should just plan to purchase 3-4 bushels each year to get us through the Christmas season. Which probably would be what we'd need to match their growing appetites and give them their grapefruit fill.
We made cookies - cranberry swirls and magic in the middles. The kids took charge of the magic in the middle cookies both times we made those. Also made fudge and toffee. 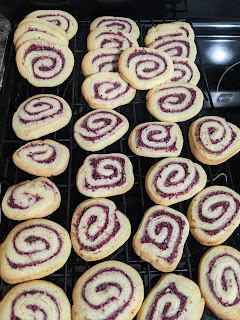 We managed to give away a good size chunk of the fudge to a friend dropping off secret Santa presents. This chunk was over 1 pound and we still have so much more! We normally give away at least half of the fudge, but that's more difficult to do in covid times. 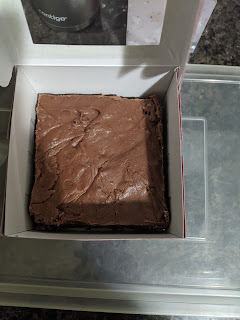 We got a little snow! We were all shocked when our rain started to turn to slush and then snow as night fell the Monday before Christmas. It was beautiful, but I had to work on-site on Wednesday, so was very pleased that it melted the next day. Kids were less pleased. 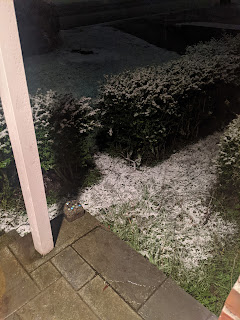 We were gifted our first-ever fruitcake. Very beautiful. Mal was not a fan. Not bad, but a little goes a long way and not a flavor I'm super used to. I could probably acclimate if I had enough of them? But I also don't love raisins in carrot cake, so maybe not. 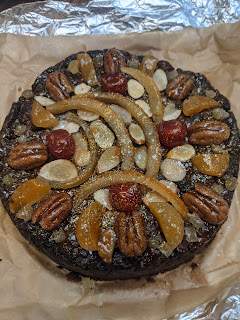 Before we knew it, Christmas was here! 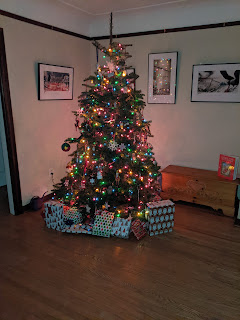 Gareth received a 2020 Mad Libs style game from his secret Santa. You roll a die to fill in the blanks with horrors of the year, such as "lockdown hair" and "meth gators". It gave us some good Christmas morning laughs. 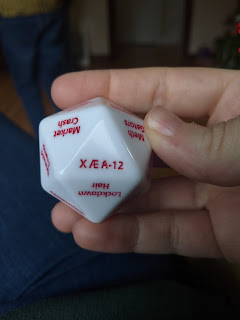 Mal received a stuffed tiger which he has named Hobbes and has been inseparable from ever since. 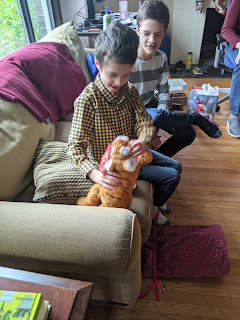 The kids got mini waffle makers from a friend and made their own breakfast the next morning! (This age where you trust them to be independent is seriously the best.) 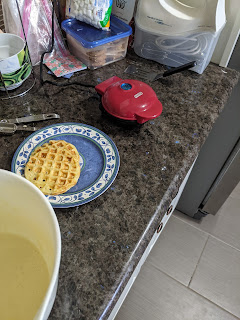 We got them multiple project packs from KiwiCo. Including this Christmas carousel that they worked together to build. 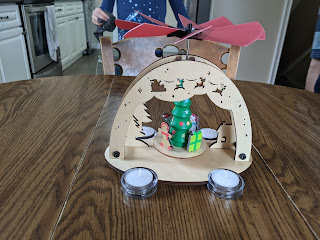 And a couple nights ago we tested out the kids' new coats and the light-up stomp rockets. Both worked excellently and it was definitely cool to see the rockets fly up in the dark. Gareth was able to get the rockets to go especially high/far, though we had to tell him to scale it back a bit so they would stay in the yard and not get stuck in the trees. 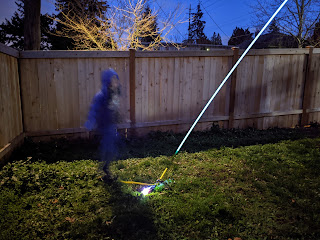 Last weekend we made an appointment to get our tree and yet again find ourselves debating whether or not to find a new place to tree shop next year. We managed in the end to find a decently tall tree for a more reasonable price, so it worked out. But I've heard good things about a tree farm that runs a local lot not far from us; I think we'll check them out next year rather than going to the nursery again.

We had a good time putting on the lights and ornaments. Every year the kids find more burnt out lights - I'm surprised we haven't run out of replacement bulbs yet. These lights are at least 5 years old, so are probably reaching the end of their reasonable lifespan. Maybe next year I'll get around to getting some LED ones. Both kids still can't resist clumping multiple ornaments into a single area of the tree. 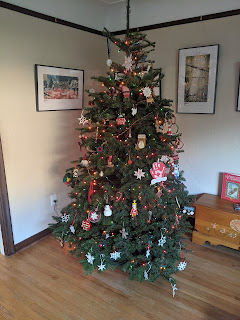 We finally got the basement wall fixed. We were a little nervous about having workers come in when infection numbers are rising. But we were able to move all of us up to the main/upper floor for work/school and workers were able to mostly come in and out through the garage, minimizing interactions in the same space.
When they opened up the wall, there was only a small spot of mold on the back of the drywall, right behind where the baseboard was. Everything else was in good shape and totally dry. Their best guess was we'd been lucky and the water had run right through rather than soaking into everything. So they patched the wall back up. The next day they put down new carpet padding where we'd removed wet padding and tacked the carpet back down. 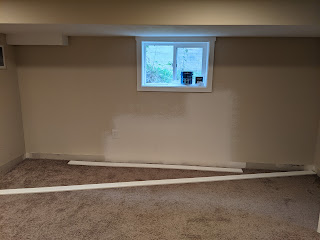 And the next day they painted wall to wall and put new trim on. It looks so good and we're very excited to have this space usable again! Of course, to do what we'd like to (get a custom-built desk along this wall and move all computers over there), we'll need more outlets along that wall at some point. So it might be a while before it's really where we want it, but we're thinking of moving the giant desk back to this side of the room for now and then we can at least start coming up with some ideas for what to do with the rest of the basement space. 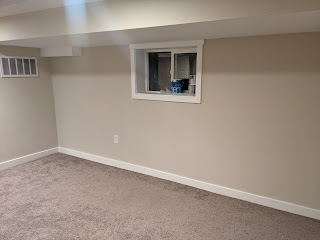 G has been getting really into Kerbal Space Program over the past few months, and drew up this design for a satellite. I don't know if this is what it ended up as, but he did get a satellite into orbit. And made a shuttle to get to the Mun and was able to return from the Mun. He and Ryan are very excited for Kerbal 2 to come out in a couple years. 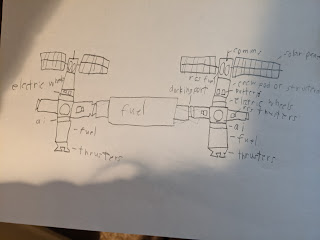 Our friends who usually host a white elephant are replacing it with a secret santa this year. With the help of my sister, I discovered this local yarn shop and was able to select some useful gifts for a knitter on our list. They were super helpful at selecting items over the phone and then had them ready to go for curbside pickup when I dropped by later in the day. 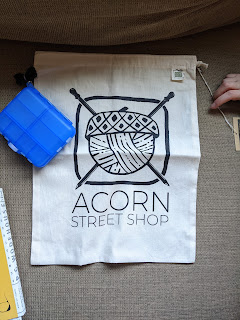 And we got latkes and sufganiyot from a local Jewish deli/bakery. I have never fried up latkes myself, so was a little nervous about that, but it went pretty well. Served with sour cream and applesauce and paired with an acorn squash and it made quite a filling dinner. To be honest, the sufganiyot look a little dark and overdone on the outside, but they still tasted delicious (and I'm not about to deep fry anything like this on my own, so I'm not going to complain). Chocolate, cardamom cream, mango, marionberry, and cranberry filled. 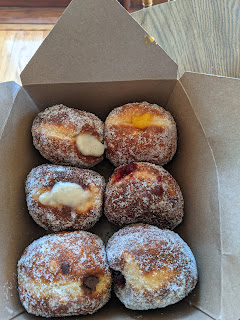 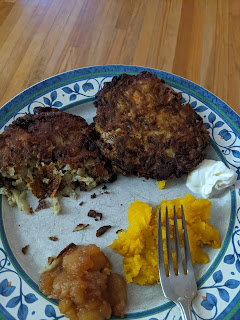 I'm hoping to get in some holiday cookie baking today, but also need to work on starting a lit review so I can reach out to a couple doctors tomorrow to propose a possible case study we could write up. Ryan has lots of reading to do as well to try and get up to speed at his new job. So some of the baking might be pushed to mid-week.
Posted by Erin at 12:02 PM No comments: