A couple weeks ago we finally succumbed to the nastiness that was Malcolm's hair after he had a cold, gave his hair a good washing and cut the bangs. I don't dare touch the rest. He was wiggly enough for the front that there was no way it was ending up even. Since his hair is wavy the unevenness isn't too noticeable and at least now it's out of his face. 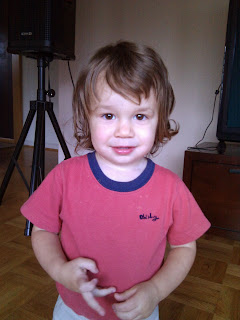 No big trips or plans for us this year, we enjoyed a quiet Thanksgiving at home. Our oven has a bad track record where whole birds are concerned, so I attempted just the turkey breast this year. That went so much better than my previous whole bird attempts. Ryan just noticed it was much smaller than the turkeys he's used to seeing, so assumed I'd made chicken. Our meal was almost over before he realized it actually was turkey. Ryan and I don't usually eat much of the dark meat anyway, so just doing up a breast makes so much more sense for us, and it still made sufficient leftovers for a few days. I wasn't sure how much it'd make, so I bought two breasts and cooked the second one today. So now we've got a bit of turkey meat in the freezer for later use.

I'd made pumpkin pie the night before and had purchased rolls. Mashed potatoes and stuffing are super-easy to make while the turkey is cooking, so it really was a relaxing day. I even got some post-labs done and practicing in. Gareth was excited because I'd promised him months ago that he could use a wine glass on Thanksgiving and Christmas. We purchased a special drink for him - sparkling pear juice. I remember how cool I thought it was the first time my mom trusted us to use her crystal and I'm guessing Gareth felt much the same, though obviously breaking a wine glass wouldn't be nearly as costly as breaking a crystal glass. But he doesn't know that.

Malcolm didn't enjoy the meal much - he happily ate about 3 bites of turkey, 2 bites of stuffing, and 1 bite of potato before deciding it was all disgusting and spitting out every bite thereafter. He was much happier spending some quiet time in his crib while the rest of us ate. Maybe in a few years he'll grow to enjoy the Thanksgiving meal more.

We don't have any Thanksgiving traditions yet, so the meal was it for us. But I've appreciated the small break before I head into the last week of the quarter and the busy holiday season starting Sunday.
Posted by Erin at 11:13 PM No comments:

Malcolm's hit the stage where he doesn't have very many words he can say but has very definite ideas about what he does and does not want and it's becoming frustrating to him (and me!) that he can't express those ideas. I hadn't been sure how much to worry about his lack of words when he clearly wasn't meeting the "expected" marks at the past couple doctor's visits (except that the doctor herself didn't seem too worried about that and I swear they're asking all the same questions I got asked with Gareth except they ask them one visit earlier, which at this point amounts to 3-6 months earlier). He had a whole slew of sound effects that he'd learned from Gareth - he'd even started saying some things like "ai-uken!" after Gareth ran around one night pretending he was playing Streetfighter IV and shouting "shaiuken" or whatever it is they say over and over and over - but not much where actual words were concerned.

Anyway, up until the last couple days he's pretty solidly stuck with just a couple regular words and a few others that you might eek out of him once every month or so. "uh-oh" and "peek-a-boo" were the regulars, along with "daddy" (though this is often used for random things that are definitely not daddy). "Shoes" joined the regulars a couple weeks ago. "Ball", "hi", "nose", and what I assumed was "baby" had come and then gone again and now "ball" seems to have come back.

In the last week he seems to be blossoming in the language area. We've added "woof", first to refer to a specific toy and now he'll say it almost every time he sees a dog. He'll say "hoo, hoo" when playing with a toy owl. I've had a couple times where he's said "boopy" to mean "poopy" and walked me to his room so I can change his diaper (dare I hope this is a good indicator for our potty-training future?). "Ow" has become his generic "I am displeased with what is happening" word and yesterday he even said "bye" to Ryan. "Daddy" also refers to me and whenever I'm chasing him down he'll try to imitate me saying "I got you". Today at lunch he even managed a successful "apple", so that will likely join the regular vocab here pretty soon. He was starting to throw quite a few tantrums, so I'm hopeful that the new language development will help to stem some of that as he discovers that he can use more than just fire truck/car/monster/explosion sounds to express himself!
Posted by Erin at 3:06 PM 2 comments: