As cliche as it is to say, it really is hard to believe Malcolm is three already. We still call him "babes" or refer to him as a baby all the time. It's insane to think that he's old enough for Teacher Lauren's co-op class (I think my class schedule next year will actually work with co-op, so he's signed up!).

I think he had a pretty good day. He got to go to his sitter's house in the morning while I met with a classmate to study for my OChem final. I let him pretend to drive the car for a few minutes after we got home and while he ate lunch he got to "watch pumpkin", which is a 20 minute Halloween movie on Netflix with pumpkins that come alive and try to eat everyone's candy. I tried to let him have a nap, but he stayed awake the whole hour plus that he was in the crib. He seemed happy enough, though, and I needed to make his cake and study, so he got some nice quiet time. Then we picked up Gareth and headed to the toy store to let Gareth select a gift for Malcolm, so Malcolm got to play with toys there for an hour.

While I tried to get dinner started the boys chatted with Gram. I finally got dinner done (beans and rice, roasted asparagus). Malcolm rather liked having the special red plate. 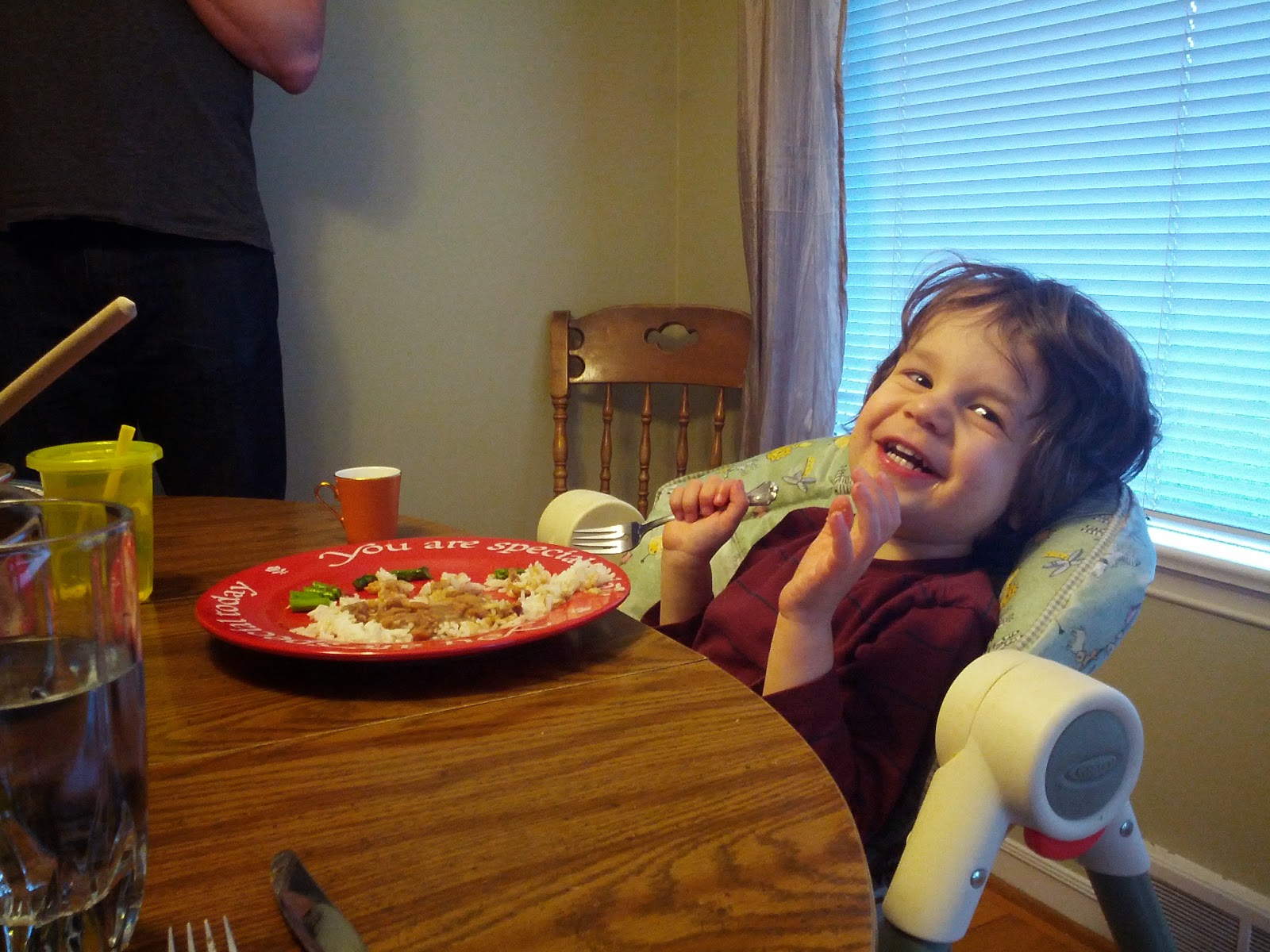 As Ryan was wrapping gifts and I was putting whipped cream on the cake, Grandma and Grandpa called, so we took some time to chat with them a bit. And "Auntie fanana"(Savannah) and Auntie Sabrina. We were already pushing past bedtime, so by the time we were done chatting Malcolm was quite tired. But he was happy enough to eat some cake and then open a couple of presents. We opted to save the others for the next day. 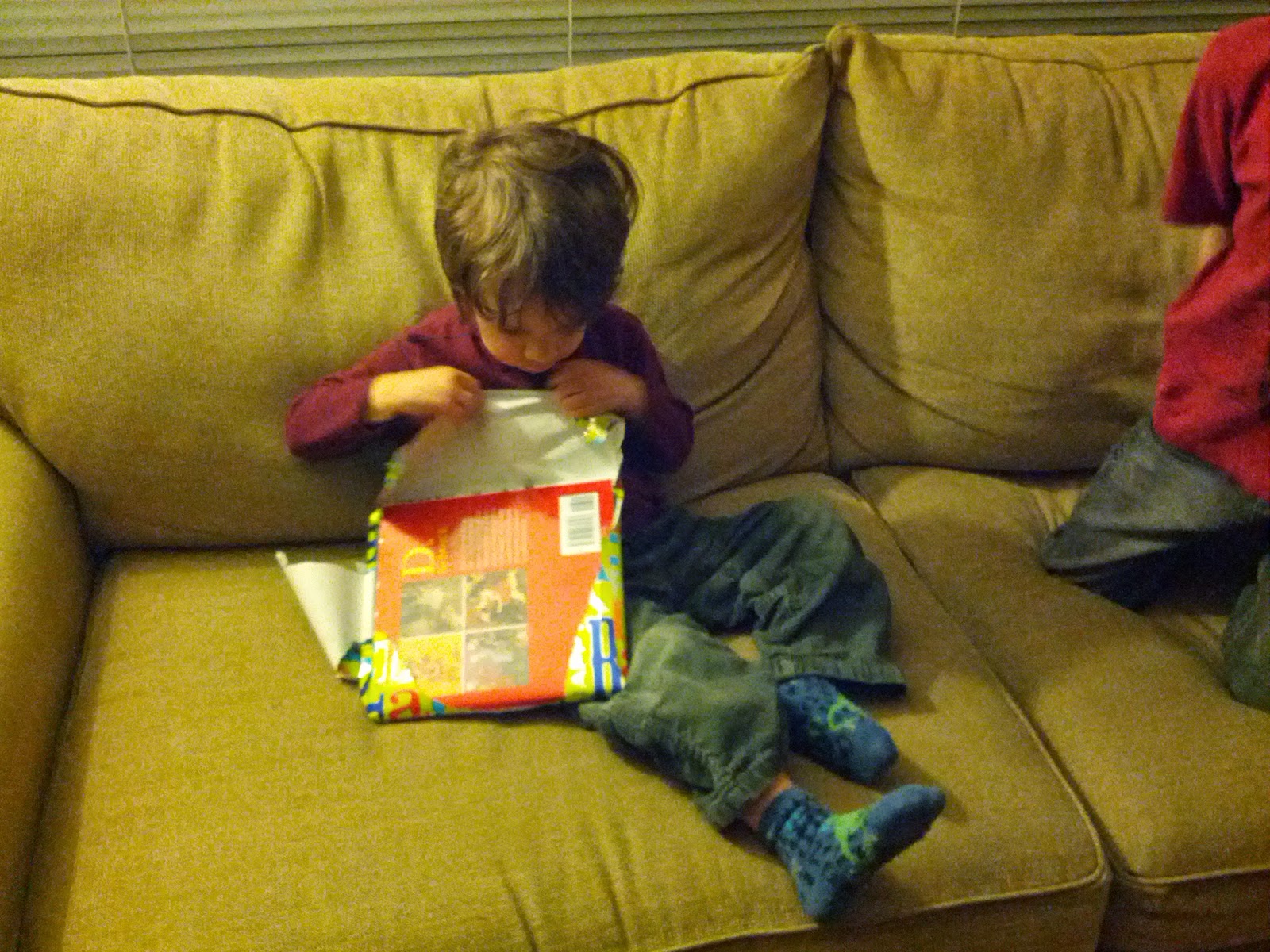 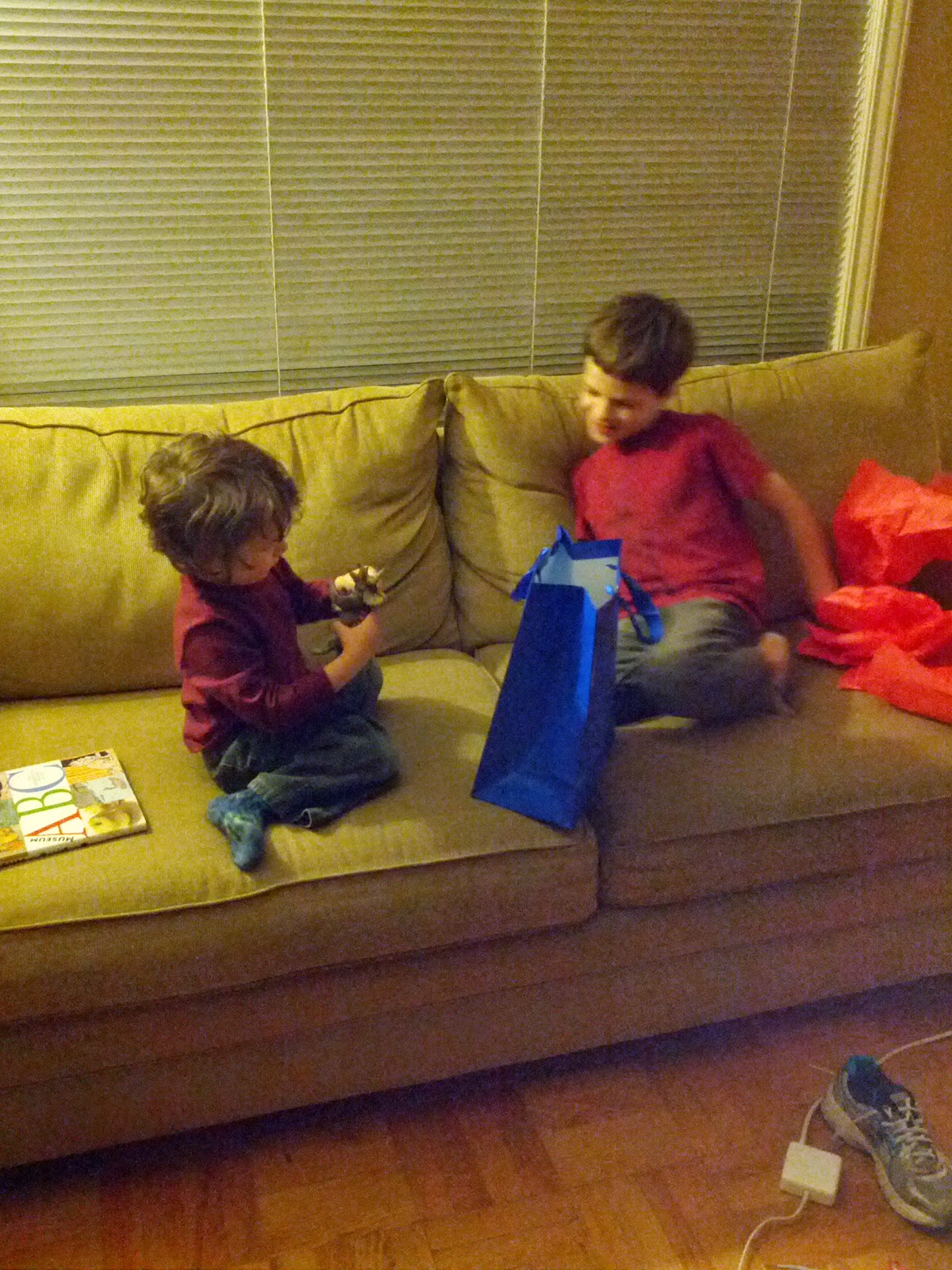 Gareth knows his brother well, and opted to get him another triceratops dinosaur. Malcolm loves it. I'm excited for the next year - I remember things starting to get a bit easier with Gareth when he was three, plus they're starting to learn really tangible things like letters and numbers, which I enjoy more.
Posted by Erin at 12:02 PM 4 comments:

It's difficult to read anatomy when Mal insists on looking at "Slim Skelican" all the time:


Back in February when he realized Slim was to be found in my textbook, it took me hours to get a page read. He flipped out every time I tried to turn the page. I finally gave up, went to a coffee shop when Ryan was available, and finished the chapter in one hour.

Gareth and the SPDs

I know I promised no bike posts for a while, but this one is about Gareth, so I'm going to break my promise. A couple weeks ago our friend told us that he had SPD shoes that his youngest son (a year older than Gareth) had outgrown. We have extra pedals lying around because Ryan accidentally ordered two pair too many when he ordered ours several months ago. So at the urging of our friend we decided to let Gareth try SPDs. Because we wanted to laugh at him when he inevitably fell. Or share with him the joy of clipped-in pedaling. Mostly the latter, but a little of the former.

Gareth was excited about this and I finally picked up the shoes on Friday and then he spent all weekend begging me to put the pedals on his bike. Ryan got the old ones off today, so Gareth got to try them out this afternoon.

I loosened the clips all the way to make things a little easier on him. He got the hang of it pretty quickly, so we graduated to the backyard.

Malcolm wanted to join in the fun, and for the first time in over a year asked to ride his bike as well. He didn't stay on it long, and a couple times just wanted to sit on it for a few minutes without riding. But that's progress. I think I let him try it out too soon and he wasn't strong enough to hold it up yet (despite its light weight) and he got freaked out. So I'm feeling good that I didn't screw him up forever.

Back to Gareth. He graduated to the backyard and proceeded to fall down a few times. I have video, but video from my phone doesn't work on Blogger ever. If I figure out a fix for that I'll add it. Anyway, he was keeping his right foot clipped in as it's the one he pushes off with. He was remembering to unclip his left foot. But then he'd lean to the right because he wanted to put his right foot down and down he'd go. But after Ryan showed him how he does things on his bike and we both reiterated to him a few times that he needs to put his left foot down, not his right, he started to get the hang of it.

It also helped once we adjusted his bike seat higher, forcing him to not try to stay seated on it when stopped. After several successful rounds in the backyard he got to go out to the sidewalk and try riding up and down the sidewalk a few times. As far as I'm aware, he managed not to fall at all. Go Gareth!
Posted by Erin at 10:16 PM 1 comment:

Malcolm has become very routine oriented at transitions. When we leave his sitter's house he has to give Slim Skeleton's arm back to his sitter (usually commenting that "Slim so sad, he a crying"), then give his sitter high fives. Once we get out the door he has to "say hi a duck", which is a small concrete duck in their front garden. Then on his way back to the stairs he has to stop and touch the plastic flamingo stuck in a stepping stone and comment that "Hopper afraid of birds". Then it's "I need say hi a soccer ball", which is this sign across the street. He'll go over, touch the ball and the kid's hair, and then usually stand behind it and imitate the kid's position. When he first started doing it he'd even try to balance with one of his legs in the air. But he's truncated the routine now and usually just sticks his arm out, squints his eyes, and smiles. 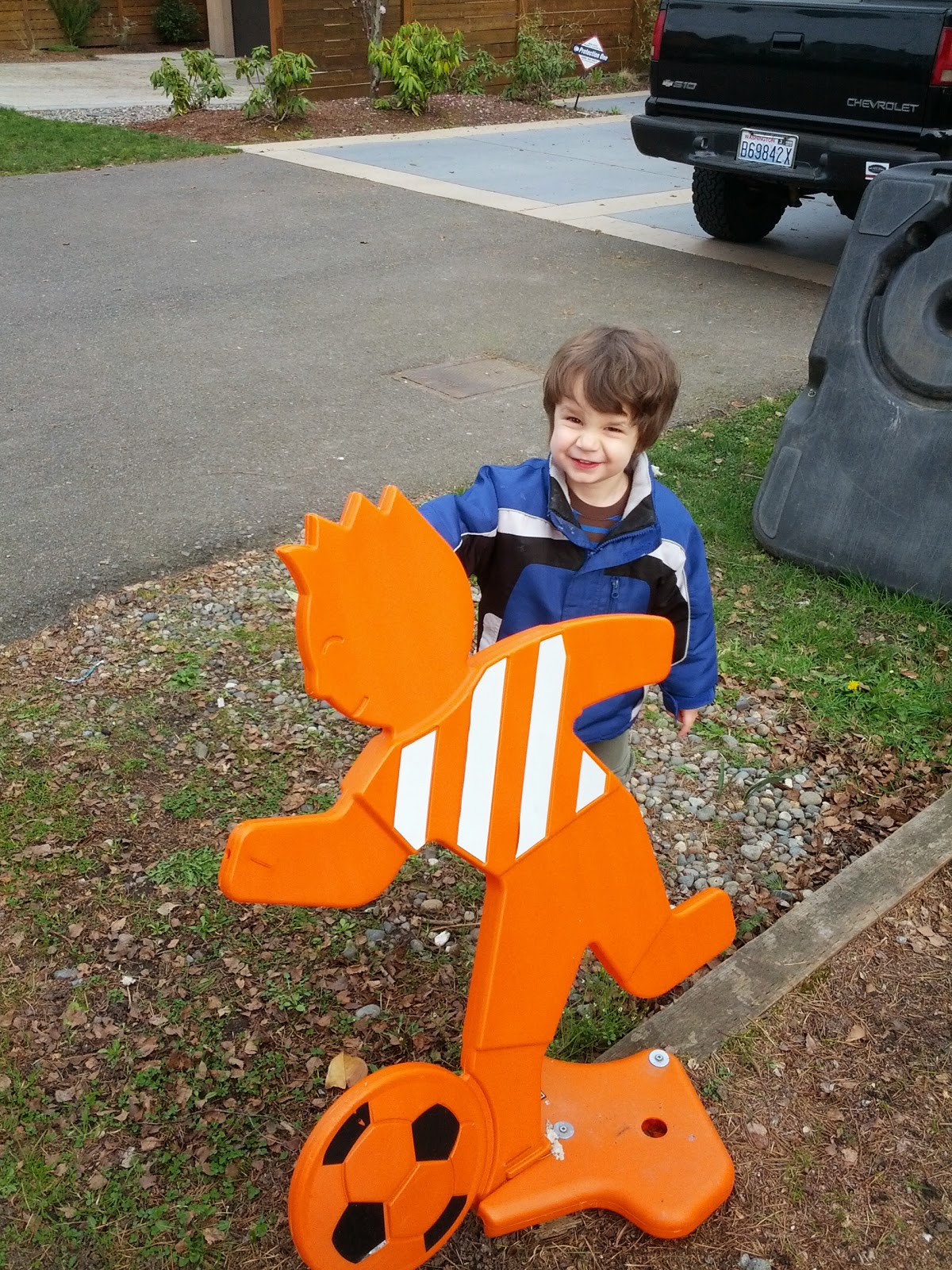 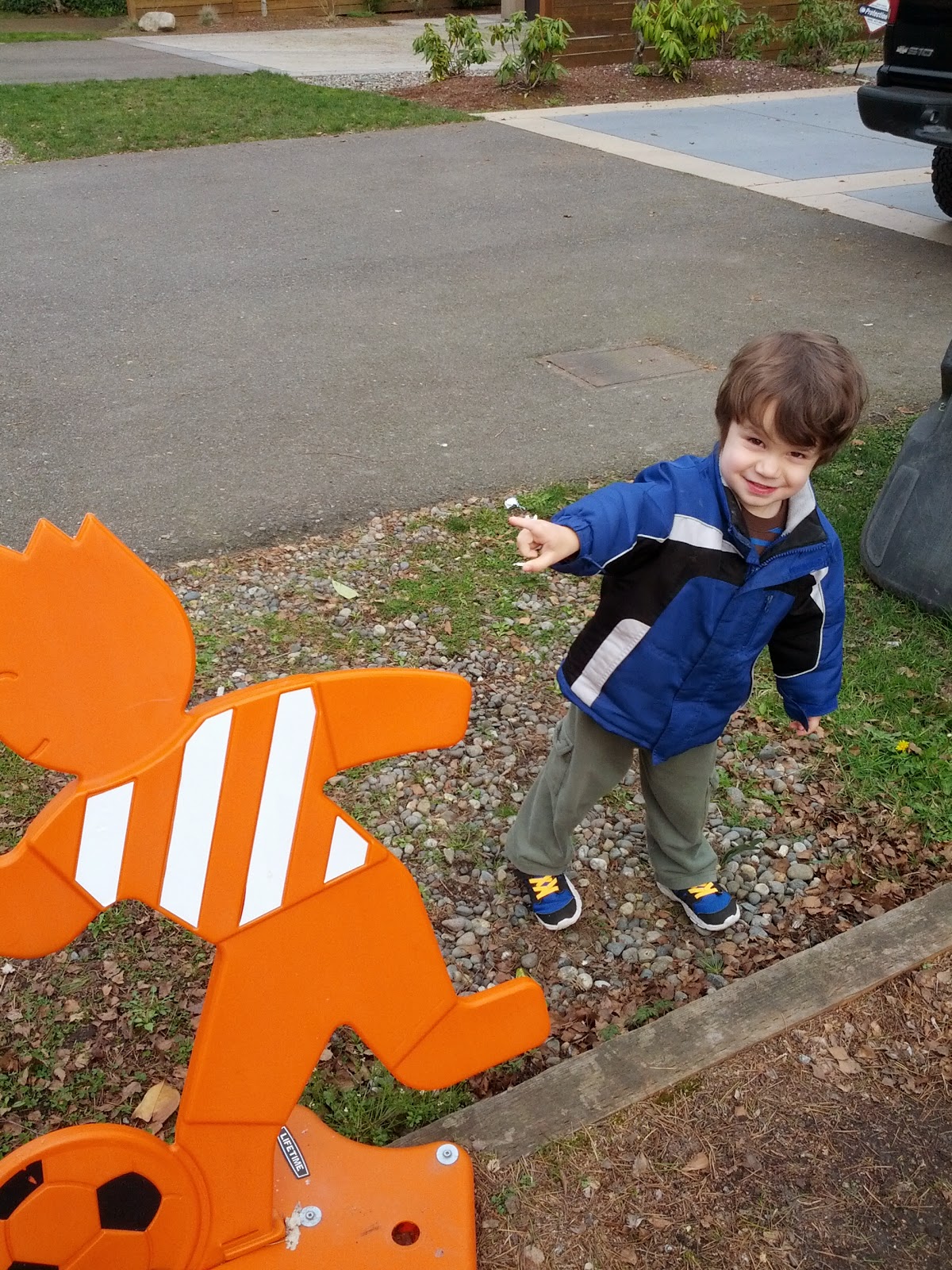 That used to be the end of the routine, we could then walk back across the street and get in the car. But now he's added on pointing out the hearts on a stepping stone near the soccer ball, and touching a reflector attached to the mailbox at this house. It's getting a bit ridiculous, but thankfully only takes a couple minutes and usually guarantees a pretty happy ride home. A few weeks back he noticed that similar signs had popped up way down the street. I quickly nixed the idea of going and saying hi to those.
Posted by Erin at 7:51 PM No comments:

Gareth had his first ever sleepover Saturday evening (parents' anniversary, so we kept his friend half the day Saturday and pretty much all day Sunday so they could get out of town for a bit). I had a clarinet choir concert today so knew I wouldn't have time to make a leek quiche or anything like that for dinner. I decided that a great activity would be to have the boys help me make sugar cookies to celebrate St. David's Day. So Saturday afternoon they helped me mix up the dough and helped to cut out a few ddraig goch cookies. Unfortunately, not an easy cookie for kids to help with as it has many fragile sections. So after a few they ran off and played while I finished up. Then before lunch today we frosted them red. The boys overdid the random sprinkles, but I kept all mine simple, just throwing on some green sugar. Maybe some year I'll attempt to get fancy and try to differentiate parts of the dragon. But I'm doubtful I'll be capable of that. 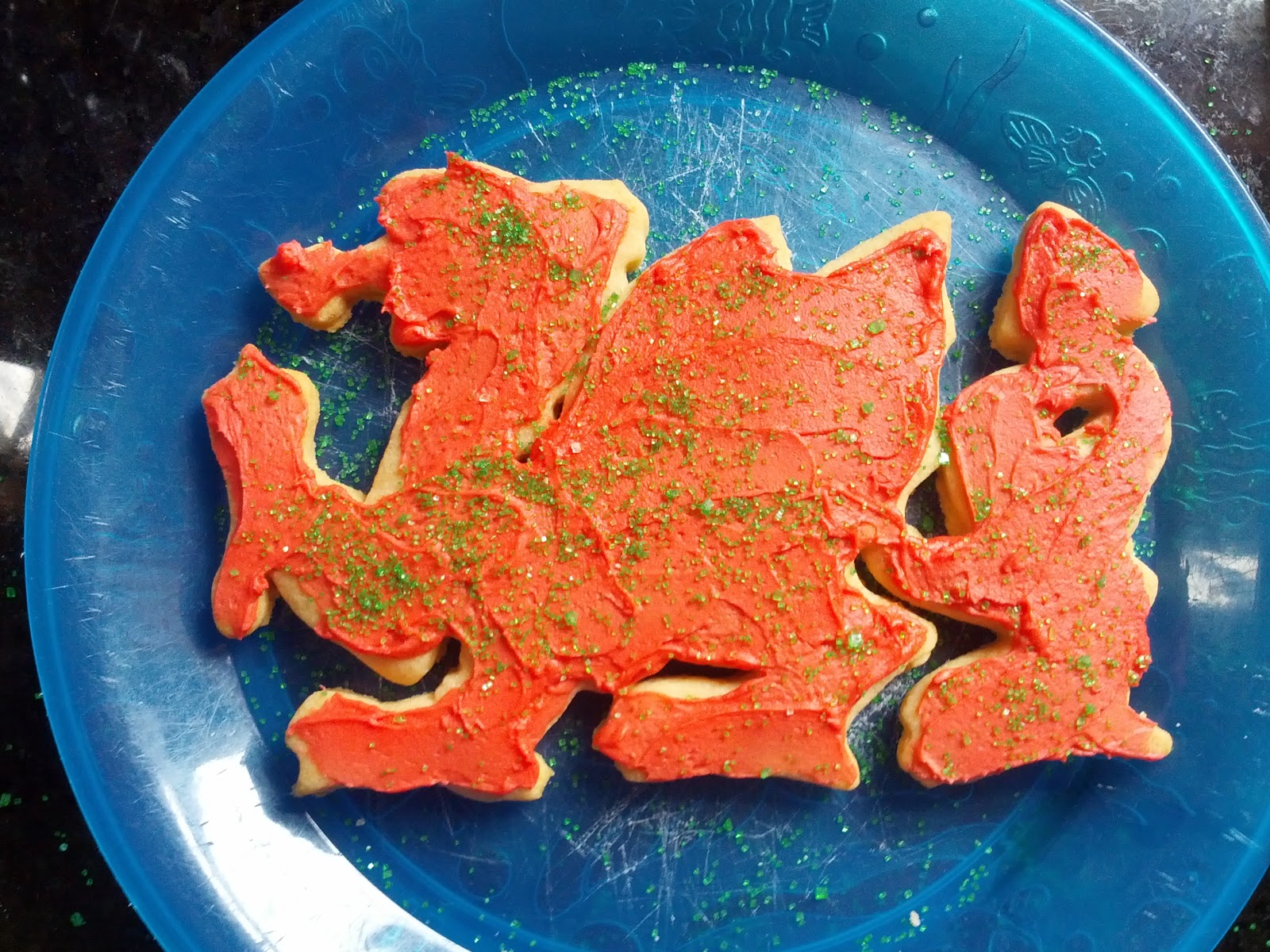 A single batch of dough only made 10 cookies (rather large). I took half of them over to some friends. Their query: "You have a Welsh dragon cookie cutter??" Wrth gwrs! Thanks to my mom for getting this for me, knowing I've been wanting one for years!
Posted by Erin at 9:37 PM No comments: