Gareth really, really, really wants a bike for his birthday. And he wants a pink one. I'd totally honor this request, but his color preferences change so rapidly (in the past several months he's been through green and orange as well and might already be moving on to red...) that I think I'll stick with something that will be easier to find and probably more boring (especially if I buy something that's not the cheap garbage you get at Walmart). But I am very pleased that he enjoys all colors.
I purchased a raised bed today - I'm too lazy to dig a hole in the ground - and am extremely excited. Hopefully as the summer progresses we'll have a good crop of lettuce, squashes, peppers, green beans, etc.! Keep your fingers crossed that some part of our yard will get enough sun for this to work! (I really wouldn't mind if the people behind us got rid of the gigantic pine trees in their yard that shade most of our yard, not to mention drop a ridiculous number of pine cones...)
I've spent the past week washing every clothing/bed linen/towel item we own and furiously cleaning. Gareth was getting bitten by something every evening. I haven't seen any of the signs of bedbugs that I've read about, so I'm really hoping it's not that. I'm thinking it might be fleas left behind by that stupid cat that lived here. So, I've vacuumed, washed curtains, cleaned blinds and windows as well. But, hey, all the clothing and bedding needed washing anyway since they all smelled musty from our place in Indiana. Now if you come visit us, we won't smell like mildew! (And the cleaning seems to have helped with the bites a little bit at least.)
What's up with Easter being so late this year? I'm sure it has been before, but I can't remember when. Anyway, the other day I pulled out a few plastic eggs and hid them in the yard for Gareth to find. Kind of a practice run, since we've never done an egg hunt before. Our long, hasn't-been-cut-since-who-knows-when grass is great for egg hiding. Gareth definitely enjoyed it and was pretty cute as he was pretending there was a baby chick inside each egg he found. He'll like it even more on Easter I'm sure when he finds candy inside. There's a hunt at the community center on that Saturday that we'll likely go to, then we'll do a little one here at home on Easter Sunday.
Most exciting of all is that I was able to get him into a preschool for the fall! I'd gotten myself okay with the idea that he might not get into a preschool at all. (I really don't think it's all that necessary for him academically. I just like it for helping him adjust to a classroom setting and for making friends. Oh, and for the break it'll give me if I don't have any work yet.) So it was a pleasant surprise to find out that this particular class actually had a few open spots and we were able to get one. It'll be across the street from the elementary school he'll attend, which is within walking distance for us. So by the time Kindergarten rolls around he'll be totally used to the walk and the school playground and at least the exterior of the school will look familiar. Hooray!
Posted by Erin at 8:55 PM 1 comment:

We forgot to call Comcast early enough before our move date to have internet that same day, meaning we had to go for half a week without. Ryan wasn't sure he'd survive. (Oddly enough, my phone still received emails and instant messages, even though we have no data plan. But if I tried to open the browser it'd realize I wasn't supposed to be getting data and stop receiving everything for a while, until it'd forget again and I'd get more emails.)
One thing is certain - moving with an almost-4-year-old is much easier than moving with a 3-month-old. The men who brought our stuff out of storage were great with Gareth - they even let him use their tools to help tighten the screws on his bed. And, here we are, not even a week later, and most of the boxes are empty. When we moved to Manassas it was two or three weeks before my parents came to visit and there were still unopened boxes everywhere. 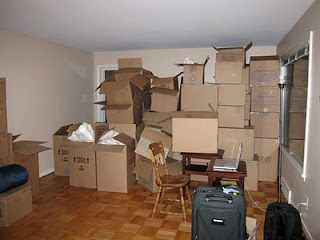 The empty box room. Eventually we'll get a sofa...
We've been doing well at making sure everything is put away somewhere before moving on to another item or a new box. The basement looks particularly awesome, with all sorts of open space: 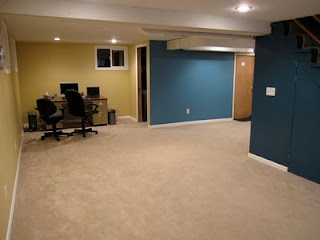 Yes, the drum set will go there one day (around that corner, in the area you can't see), but there should still be plenty of space left for Gareth to play in. (He's almost as excited about the drums as Ryan is and tells everyone who comes to the house that we're getting "loud drums!". A junior drum set might be somewhere in our near future...)
The only thing left to do in the kitchen is clean out the freezer. Gareth helped me wipe down all the cupboards, and really did quite a good job of it. 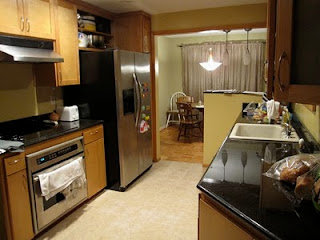 Cleaning the fridge and the freezer has probably been the yuckiest part since one of the previous tenants had a cat and there seems to be cat hair inside the fridge (as well as several other odd places around the house). Blech. Thankfully they were required to have the carpet in the basement cleaned and it smells so much better than it did when we first looked at the place, but every once in a while I still catch a whiff of smelly cat down there.
There is quite a bit of work to be done out in the yard as the previous tenants didn't do much there. We have to get rid of some moles and the grass needs mowing. There's some long ornamental grass out front that needs cutting back so we don't get our recycling/yard waste/trash bins caught in it every week (tangent: one thing I love, love, love about Seattle is that we'll have hardly any trash as most everything can either be recycled or put in the food/yard waste bin). And the couple of gardens have been sorely neglected and need some weeding and clearing away of pine cones (Gareth will enjoy that bit) and probably something planted in them as well (something shade-loving as the pine cones are from trees that overhang that part of the yard). I'm just itching to be done unpacking and organizing inside so that I can have some fun with the yard. We actually had a sunny weekend and it's been killing me to see everyone else outside doing yard work while we're stuck inside unpacking! Of course, we need to purchase a few items (like a lawnmower and a rake) first anyway. The biggest "downside" to move-in day was that our TV was broken in the move (the screen was pushed way in and the sides were cracked and broken), so I guess we'll finally have to upgrade.
Posted by Erin at 8:34 PM 3 comments: