Apparently mid-February is when we typically get snow, given all the "look back on these memories" notifications Google photos gave me of all our past snowstorms in the week leading up to our snowfall this past week.

We started with a dusting on Friday - at this point I thought we'd maybe get 3-4 inches, which would be a decent snowfall for Seattle. 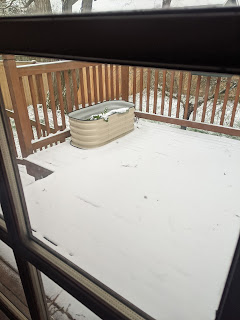 It started snowing again Friday evening and we woke up to a surprisingly decent snowfall the next morning. The kids were super excited. We don't own any sleds, so snowmen, snowballs, and snow angels are about all they can do. We did put them to work helping to shovel though (they need to learn how at some point and just don't get a lot of opportunity to practice). 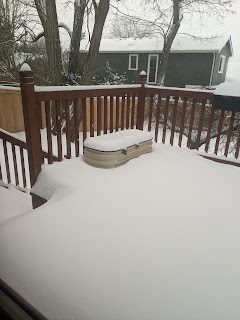 I thought that was going to be it, but it kept snowing on and off through the day and then by the next morning we had accumulated a good foot of snow! 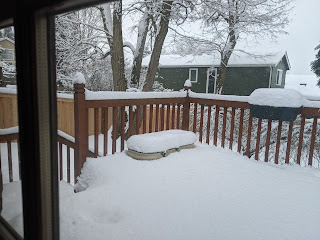 I was quite proud of our sidewalk care (even though we didn't get out to get salt before the storm came - thankfully, once it started snowing we only got warmer and things didn't melt and then freeze). We had, by far, the clearest section of sidewalk on the block. I'm grateful to have the sidewalk and therefore more than happy to take care of it so others can get around more easily in snowy weather. 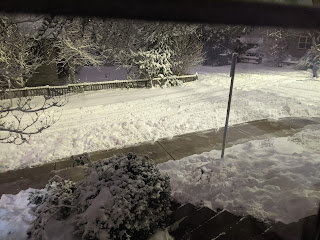 Even though things were starting to warm up and melt by Monday afternoon, there was still a lot of snow on our street and a woman trying to get back to her home ended up with a stuck car. We were able to dig her car out and, with the help of neighbors, gave the car a push to get her going again. It was a little iffy watching her get down the hill, but she made it.

We realized that (especially now that we have this nice, wide sidewalk) we should get a second full size shovel (can only do so much as an adult with a child-size shovel) so we can get through the job more quickly. Maybe once Gareth gets more practice we'll be able to send him down the block to help clear more of the sidewalk.

It was fun to have the snow this year - coming on the holiday weekend where we didn't need to get anywhere - as noted by this article. Lots of sledders, skiers, snowboarders, and snowshoers seen along our street throughout the weekend. Obviously much less fun for anyone who had to work through the weekend. And, of course, we are quite happy that it's mostly gone now so we can resume getting groceries and so on. 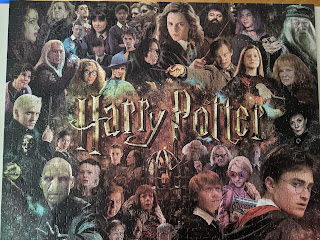 1000 pieces and proved quite tricky. It also hung over the edge of the table slightly, which provided the added challenge of trying not to knock any sections off inadvertently! Ryan worked on a bit of everything. I started with the lettering, which took me a few days, before lending a hand with some people, and Gareth and Mal focused on faces and wands. Gareth mostly helped the first day, but after that was more focused on his new video games. Mal took over as the face expert. It was so fun to see his puzzling skills blossom this year, though he still has no patience for sorting through and finding all the edge pieces to start with.
Instead of puzzling on New Year's Eve, we spent the early evening virtually with my sister's family. We set up a zoom call and a watch party so we could simultaneously stream The Thin Man and chat about it together. I, of course, had seen it several times before as these older movies were common in my household growing up. But it's been at least a decade. I'm sure I made Ryan watch it once in our early years together, and the kids had never seen it. We all loved it and it was so much fun to laugh together at the antics (well, drunkenness) of Nick and Nora Charles. The younger kids particularly loved the dog (and really, who doesn't love Aster?).
We munched on cheese and crackers, veggies and hummus, and jerky while we watched. My mom's gooseberry jelly paired with brie is divine. Ryan and I also tried some new cocktails (French 75, boulevardier, and bijou). I only had a few sips of the boulevardier as whisky forward cocktails are less to my taste. Very fun to try some new things though. Even though I set my alarm for the wrong day and woke up late the next morning, this was definitely one of our best New Year's yet!
Also, just for fun. I thought for sure our garden was done for when we got the snow and accompanying freezing nighttime temps for a couple days. But the chard seems to have bounced back quite well! As you can see, the squirrels or rabbits or whatever continue to enjoy it. So we (or the animals) should be able to eat these last few leaves at least. 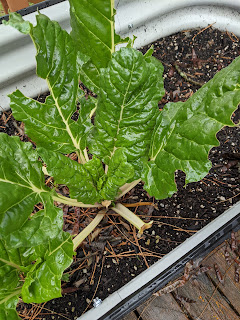 I'm on furlough this week, but don't have any major plans since Ryan and the boys are both back at school/work. At some point I'll take down the Christmas decorations, I suppose.
Posted by Erin at 3:48 PM 1 comment: