We've been thoroughly enjoying winter break thus far, just taking it easy. We've made a few treats, but not many, and have done some cleaning of the house, but not all that should be done. We got our tree on the 11th, when I was sick. Ryan and Gareth went to pick it out. Then we got it in the stand and went through our annual ritual of freeing the branches. 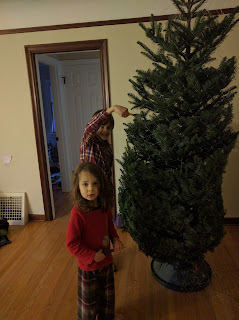 Once I was done with finals we put on the lights and then added ornaments a couple days after that. 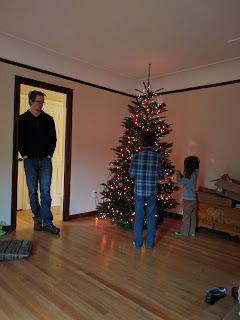 The boys were very eager to take part in that. Oh, and apparently we managed to get Mal dressed that day. Good job, us!

We've done minimal baking thus far. Gareth and Mal put together the dough for gingerbread cookies and then I made them up a couple days later. Mal and I made cranberry-macadamia bars while Ryan and Gareth were out seeing Rogue One. Oh, and the boys got haircuts. Gareth's wasn't very drastic, just trimming around the ears. But Mal had several inches cut off since he hasn't had a cut in a couple years. 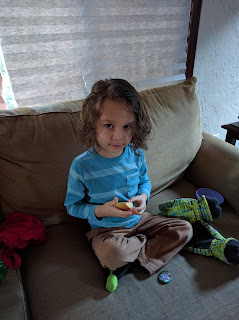 We had our usual big Christmas Eve dinner and then watched A Christmas Carol while drinking hot chocolate. After the kids were in bed we put together stockings up in our room and then once we figured Gareth was asleep we put out all the presents. The past couple years we've been good about wrapping presents as they come, which I've been very grateful for come Christmas Eve.

The boys got up around 8 Christmas morning. Gareth helped Mal get dressed and then they hung out in our room while Ryan and I got ready. By that time they were very eager to head downstairs. We opened stockings and a couple presents then had our traditional breakfast. 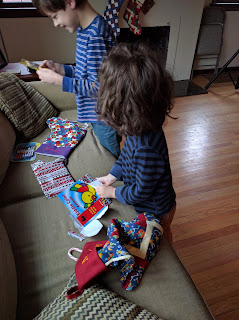 Then we returned to present opening. Mal was very excited by the dinosaur he received from his Grandma and Grandpa. "They got it at a store!!!" were the first words out of his mouth. 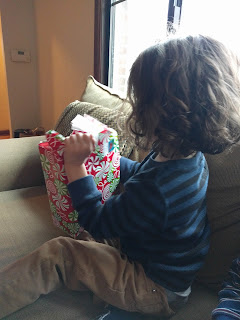 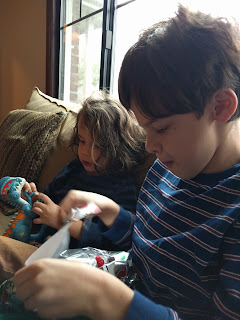 Ryan acted as the present-giver, carefully balancing how many each child had opened so that things were kept equitable. 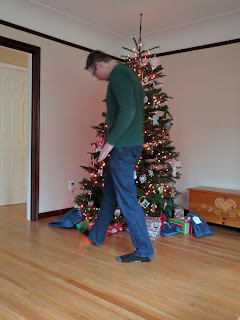 He opened some of the family gifts, including this one for which I'm excited. We got a companion game from my sister. 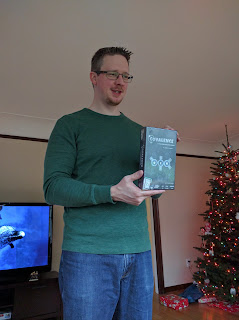 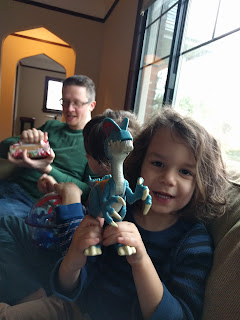 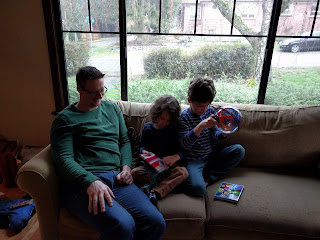 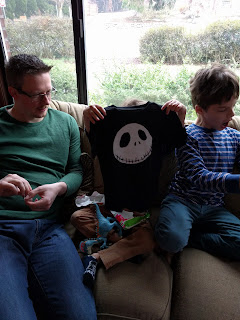 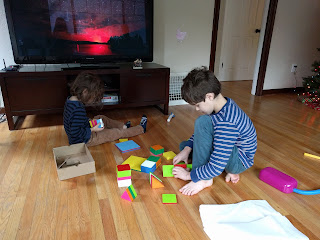 Ryan got some house slippers. Almost every review said they run small, but he decided this morning that the size 14 was too large, so we'll take those back and try out the 13. 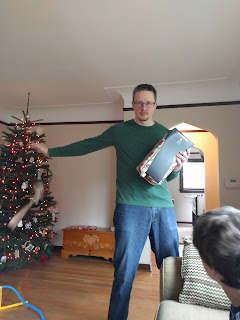 Gareth was very excited to get a couple more Perplexus puzzles. 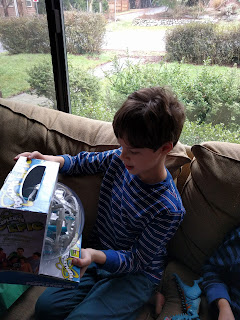 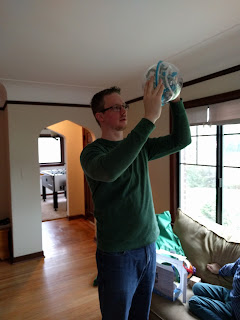 So that was the holiday. Nice and relaxing and enjoyed greatly by the kids.

On the day of my program holiday party we also got an actual, legit snowfall. Pretty sure this was Mal's first snow that stuck to the ground and accumulated decently. We've definitely had dustings before, but nothing you could make a snowman, or even a snowball, with. It didn't start snowing until late Thursday night and was supposed to turn to rain overnight, so I was worried the kids wouldn't get any fun out of it at all. Some friends even woke their kids up to go play in the snow that night. I'm no fun, so we didn't do that. But that worked out because the snow was still around in the morning and Gareth even had a delayed start, so they got to play in it a bit. 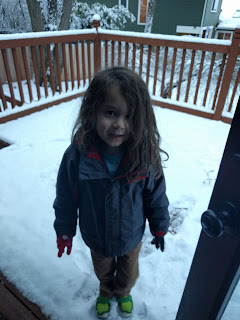 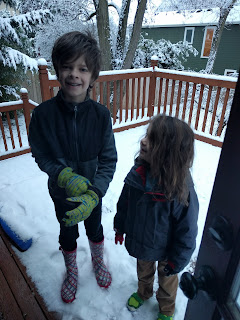 Mal eventually discovered that cotton gloves aren't great for playing in the snow. He started crying when his hands got cold, so they came in and I gave them hot chocolate (which made it "the best day ever!" according to Gareth (but he also said that about the last day of school before winter break and several other days recently, so it's become rather meaningless)). And I dug out Mal's mittens that I purchased last year that actually keep the wet out somewhat. He got to head out again as Gareth was heading off to school. By which point it was starting to rain a bit.

Before the cold hands and hot chocolate, Gareth worked to make this sad little snowman: 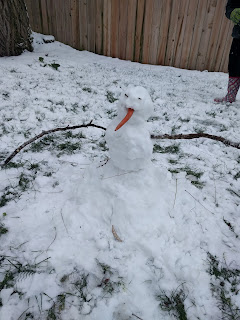 With a big redwood in our back yard, lots of the yard didn't have much snow at all. And due to his lack of snow experience, Gareth has no idea how to actually make a snowman. But the boys were both very excited about this attempt, so I wasn't going to knock it because, hey, I didn't have to be out in the cold making it.

By the end of the day most of the snow was gone, which was good since we had the party that night to go to and icy roads are not something I'm fond of. The boys would love to get more snow this year, I'm sure, but I'm good with what we've got.
Posted by Erin at 12:37 AM No comments:

End of Quarter One

It's been a whirlwind couple of weeks. Post-Thanksgiving brought all the assignments mentioned in my previous post. I managed to eek an op-ed out of myself and, with much reluctance, submitted it for publication. I knew they wouldn't publish it, but the thought of anyone reading it was simply horrifying to me. Op-eds are very much not my medium of choice for getting my thoughts out there.

On the last day of classes we had a meeting with our program director. This program is pretty cool because they really take our feedback into account. It was fun to get to see the 2nd year students at that. They're all about to head out for their practice experience so we likely won't see them as often. They were very excited to be done with all their coursework; it was weird to realize that in one year we'll be where they are, finishing up classes and theses/capstones before heading off for several months of internship.

In the evening we had our department holiday party at a professor's house. They have a couple of big dogs, which Mal was a little nervous around initially but soon became very excited about and followed them around all night. He even told me at one point, "Mommy, I want a dog. I want that one." Both boys love the food - latkes (Ryan had never heard of latkes before! Can you imagine?!) and chicken wings. The program director kept giving Mal chocolates that I assume he brought back from one of his many travels. Gareth hung out with the GCPD director's kid all night as they're just a few years apart in age. We all had a pretty good time then headed home to get the kids to bed. I went to bed as well so I could get up early and get lots of work done on my metabolism final.

A few hours later Ryan woke me up to tell me Mal was vomiting. So I jumped out of bed and poor Mal was sitting up in bed, shocked and upset. I got him to the bathroom and bathed him (vomit was everywhere - in his hair, on his hands, on the floor, blankets, etc) while Ryan started stripping the bed. As I was getting him in the tub he said in such a forlorn voice, "I'll never eat again!". It was so adorably pitiable. We realized the floor behind the bed needed mopping, so we moved Gareth to the basement to sleep, moved the bunk bed, and had Mal sit in the living room while we finished cleaning the room and Ryan made the bed.

The whole middle-of-the-night vomit thing is new to us. Gareth has thrown up once in his life (outside of baby spit up, which he was quite prodigious with). And the last time Mal threw up was when he was in his crib still. In the end, we all got back to bed around 2 and eventually I crashed on the couch because Mal kept waking up because his stomach hurt. Thankfully by Saturday evening he seemed to be doing better.

Unfortunately, by Sunday morning I realized I'd probably caught the bug. It's not a fun one, at all. And being sick all Sunday night and into Monday morning meant I missed my Epidemiology final Monday morning. I emailed the professor Sunday and thankfully he said they'd figure something out. The whole thing threw my planned finals week awry, but I managed to get my Metabolism final turned in on time still and got everything else done by Thursday evening. I'm so glad the Epi final was the only in-person test, otherwise the week would have been much more difficult to sort out.

Now it's all over and I'm a little shocked that I actually managed to get everything done in those last couple weeks. I have a feeling that will be a recurring feeling throughout the program. It was exhausting and difficult, but I've learned so much this quarter. Next quarter will likely be even more intense since we no longer have any 1-credit classes, which really helped balance the load this past quarter. But that's something to deal with when I get there. Until then, I'm going to enjoy the break!
Posted by Erin at 8:13 AM No comments: