This has been a very unusual winter. The kids got a snow day a few days into February, which we now have to make up at the end of the year because apparently we stupidly assigned our single snow day to a specific date - February 1st. Gareth made several snowpeople while Mal enjoyed throwing large balls of snow at the tree. 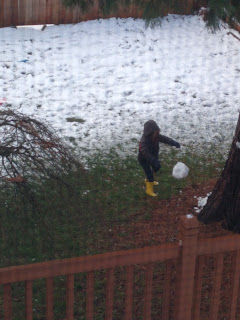 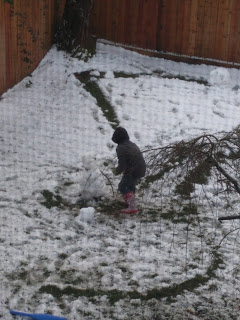 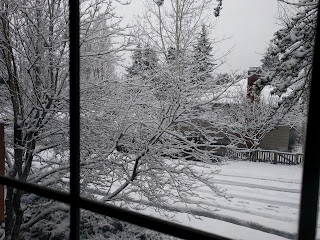 We actually had even more snow early on the 27th of February. It came down in big flakes really fast, but it happened so close to the start of school that school was not cancelled, which was a huge disappointment to Gareth. Ryan and Mal stayed home because trying to go down our hill in the snow isn't something we're too keen on. Probably would've been fine, but things get slick quickly and we prefer not to risk it. Between all the snow and still being in the upper 30s/low 40s into March, it's been a very odd winter indeed.

One day Gareth had his 3rd Grade yearbook pulled out, so Ryan went and found his from the same grade. We compared the signatures in their books, and while Gareth had many from his classmates, I lovingly pointed out to Ryan that most of his few were from teachers. And we had a good laugh about his 2nd place Tug of War ribbon. 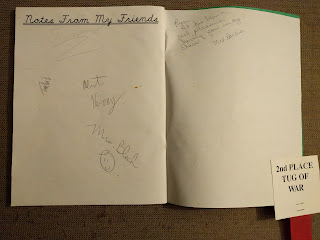 I had one particularly rough day at school but Mal wanted to make molecules when we got home and that helped work off some of my frustration. He specifically requested the molecule that looks like a dog (propane) and was very excited about the oxygen molecule I made him. And then he curled up in my lap and told me he was a kitty. 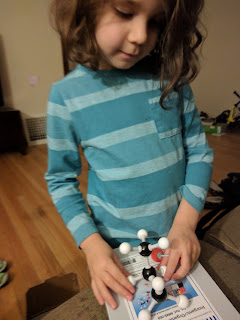 It's also been a horrible year for illness. Mal got sent home from preschool last week for a fever. We thought it went away, but then it maybe came back, then he seemed fine, then over this past weekend it came back again. Horrible timing, but it worked out pretty well because I've been able to be home most of the week and that means Ryan hasn't had to stay home from work for it too much. I took him to the doctor and his exam didn't indicate anything scary, so they figured that he was just taking particularly long to get over norovirus or some other bug going around. He's been home all week now, but has finally been fever-free today, so he'll head back to school tomorrow. Wednesday, Gareth woke up with pink eye, so he's been home the past couple days as well. Luckily we still had drops left from their bouts of pink eye back in the fall. I'm really hoping all the illness stops as we get into spring. They are never sick this much and it's really not helping Ryan's work or my schooling to constantly have one or the other ill. Mostly Ryan's work since he gets stuck having to stay home so I can go to classes still.

I'm a few edits to a paper away from closing out the quarter. It's been much more difficult than the previous quarter, but I've learned a lot. And I'm excited for next quarter, when we get to start having more application-oriented classes. I'm also excited to get going on my capstone project, which is going to be on tube feeding. It's going to be a huge project, so can be a little daunting to think about at times, but it should prove incredibly useful and help a lot of patients, so I'm excited about that. I'm also going to learn a ton, so that's good as well. I have one meeting for that over the break and I'm getting going on my literature review. I've read a ridiculous amount of papers in the past couple weeks, but reading bunches of papers is always easier when it's a topic you're excited about!
Posted by Erin at 5:58 PM 1 comment: