The Sun is a 'asma

That was Gareth's initial attempt to say, "the sun is a miasma of incandescent plasma". On the second repetition he managed, "the sun is a miasma 'descent 'asma", so pretty close. It's the first line of a TMBG song from their Here Comes Science album, which Gareth is currently in love with. His favorite song is, somewhat predictably, "I Am a Paleontologist", though he also likes "Speed and Velocity" because he can run around like crazy pretending to be an airplane.
The other day we were at Red Robin and ordered some cheese sticks. Gareth's favorite part of the appetizer? The lettuce leaf. He ate about half a cheese stick, but couldn't get enough of the lettuce and almost broke down in tears when it was all gone. His next favorite part of the meal? The mandarin oranges that came with his burger. He was excited to get a burger, but once it actually came all he noticed were those oranges.
And finally, here's Gareth's version of a classic story, told to me at the dinner table tonight:
The Big Bad Wolf blew down the little pigs' house. And then he eat the little pigs! And then the little pigs were broken into little pieces with the Big Bad Wolf's sharp teeth! And then the Big Bad Wolf blow down the train. And then he get on the train to go to the other grass. And then the Big Bad Wolf eat a duck! And a monkey! And another pig and another pig and another pig and another pig and then a turtle!
Posted by Erin at 2:35 PM 2 comments:

Gareth hasn't been swaddled since he was three months old. The other day he was asking to be wrapped up in his orange blanket, but Ryan discovered that it's now far too short to really wrap him in. So we pulled out a blanket that was in the closet here. And it turns out it's big enough that you can swaddle and almost-four-year-old in it! 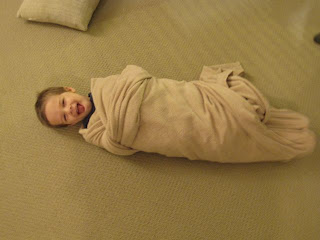 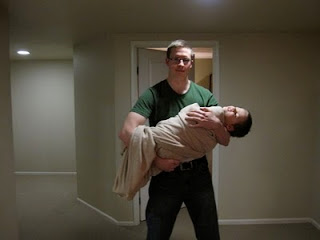 Gareth did manage to wriggle out of the blanket, but it took quite a bit of work on his part and some encouragement on ours. He thought it was great fun and was begging to be wrapped again before bed. I, not wanting to deal with a mess should he need to use the bathroom during the night, talked him out of that one.
Posted by Erin at 8:14 AM 3 comments:

Weight Off My Mind

We've successfully disappointed some poor souls somewhere by beating them to a house, just as we'd been disappointed a couple of times previously in our one week here. Maybe I'll sleep a little better at night knowing that we have a place to live come March!
Late last week we came across a few two bedroom places (we'd been looking at three bedrooms previously, mainly because all the two bedrooms I'd seen were apartments/condos/townhouses) that we thought might work. Now, remember, we have to have room in the house for a drum set. So, while these locations had only two bedrooms, most of them also had a basement with room for a set. The unfortunate thing about them is that they aren't necessarily any less expensive than the three bedroom places (of course some of them have just as much, if not more, square footage than the three bedroom places). Not only were we seeing several two bedroom places, but they were also in areas that have great schools and are close to work. That's actually been a somewhat difficult combination to come by around here.
We looked at a couple one day and thought both of them would work, but had one we were really interested in seeing scheduled for the next day. I was a little nervous, because what if the third one wasn't as great as it looked/sounded and we ended up losing both of the first two because we hadn't acted right away? (Seriously, stuff moves ridiculously fast here.) Luckily, the third one looked great. The only worry was that, although we were the first to be shown it, it sounded like the owners were going to accept several applications and then make a decision later this week. Thankfully, at some point this afternoon the owner told me that we were first in line, and if we could get the application and first month's rent to him the place would be ours. So we went over to their place after Ryan got home, handed them our application and rent, and signed a lease. I guess they'll check up on us still, but I'm glad they decided they could trust us to have good credit or whatever so that I can be done worrying about the housing situation!
Some awesome perks: the home has been fairly recently remodeled. The kitchen isn't huge (but is comparable with most of what we looked at), but it's got newer appliances, granite countertops, and even a small pantry area. The bathrooms have also been redone - a definite plus considering some of the bathrooms we looked at. The basement is finished as well and there are recently refinished hardwood floors in most of the main floor. The back yard is completely fenced in, has a great patio, an apple tree, and a good amount of lawn for Gareth to play on. Oh, and I definitely don't want to forget that Ryan will be able to bike to work in about a half hour. So awesome.
Posted by Erin at 10:26 PM 6 comments:

One cool thing about our temporary housing complex is that it's right across the street from the Olympic Sculpture Park. Gareth and I took a walk there this morning, despite the spritzing rain and wind - sure it's a bit chilly, my ears were pretty cold by the time we got back home, but it's nowhere near as cold as Indiana is right now.
Gareth decided to take a picture of Perre's Ventaglio III by Beverly Pepper: 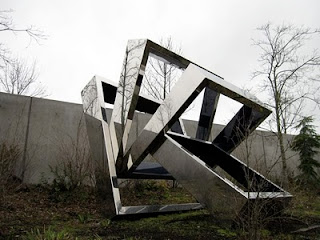 While I decided to take a picture of Schubert Sonata by Mark di Suvero: 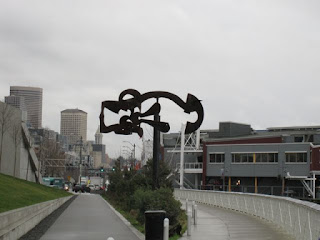 Gareth also enjoyed watching the trains going by and looking out at the Sound, particularly watching the waves crash against the rocks. 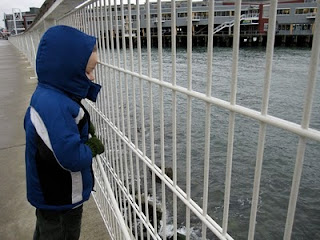 Hopefully we'll have a sunny day soon so we can go back and enjoy the park for a little longer - this trip definitely did not use up enough time!
Posted by Erin at 9:59 AM 3 comments:

I've discovered that I'm a country mouse. Or at least a small town mouse. Definitely not a city mouse. (Gareth watched a SuperWhy episode using that story the day we moved.) I love cities for visiting, but actually living right in them? Not for me. I was doing great on moving day until we were driving in downtown, trying to find our way to our temporary housing. And the crowds and the traffic and all the one-way streets quickly started to irk me, knowing I'd have to put up with it every day for the next several weeks. Your rooms are never completely dark because of all the lights shining right in them. And don't even get me started on the trains that went by around 2 am, ringing their bells or whistles or whatever for several minutes straight. Between that and what sounded like someone vacuuming at 3 am and Gareth getting up and helping us realize that if you turn the door handle to the apartment from the inside, the deadbolt will unlock itself and he'll walk out of the apartment, causing me to toss and turn with worry that he'll leave the apartment and go down the elevator and who knows where during the middle of the night, I didn't have a great first night. I'm sure I'll get used to some of it after a few days (and I finally got up that first night and put a chair in front of the apartment door), but right now I'm just exhausted and trying to battle the usual post-move feelings of "why did we ever come here?!". The discouragement of looking for housing isn't helping things either. Too bad all the interesting jobs are in big cities and not small towns like Somerville or affordable places like Lafayette. I guess I'll have to eventually give up on finding a replica of my hometown and settle for becoming a suburbanite as the next best thing. Hopefully once we find a place to live my glumness will dissipate at the prospect of reuniting with decent knives and a full array of toys for Gareth.
Posted by Erin at 1:32 PM 2 comments: