Gareth turned 3 this past weekend. Though we occasionally still call him a baby (usually when he's whining too much), he's definitely a little boy at this point. (When do they grow out of the whining stage? I'm hoping it's soon.)
I decided that I'd better have a small party for him. Thankfully my parents came to visit over his birthday, or else I would have thrown my hands up in exasperation and given up. It wasn't too difficult, really. The cake was the most daunting. I found a monkey cake mold, greased and floured it up and hoped for the best. Unfortunately the cake still stuck and broke in half when we took it out. That's where I would've given up and just gone and bought some nasty frosting-covered something from the grocery store.
I'd also forgotten how much cake decorating hurts. It always looked so fun and easy when I watched my mom do it as a kid. Since I don't frequently decorate cakes, I revert to the fun and easy memories rather than the hand-cramping memories when thinking of cake decorating. Good thing my mom was here since she made the whole process go much faster and we were able to laugh at ourselves every time we made a mistake. We did an awful lot of laughing. All our work paid off in the morning when we showed Gareth the cake and he said, "Wow! A birthday monkey cake!" with no prompting from any of us.
We had hoped the weather would be good enough for the kids to play outside, but as it turned out it was windy and chilly that morning, so we kept them inside. Thankfully 3 and 4-year-olds are easily entertained and occupied themselves easily with a bunch of balls (thank you, Kristine, for bringing all of your balls over!), beanbags, and a beanbag toss which my parents brought with them. Gareth was excited to open his presents and while he usually has a favorite the day of, in the end he always plays with them all equally. (This makes it very difficult to thin out the toys in his room ever, since he pretty much will play with anything and everything that is there.)
After all of his friends had gone we decided to head over to the Bug Bowl. It was way too crowded for Ryan's taste, and Gareth wasn't in a patient mood that day so the long lines ruled out just about every activity. In the end we got him a ride on the giant rocking horse, a balloon, popcorn and a face painting and left. He was perfectly content with that and we made it home in time for him to have a nap still, which made all of the rest of us happy.
I did take some pictures of the party, but they all turned out blurry since he was moving too much. (My neighbor and parents took some as well, so hopefully I'll get those from them at some point.) We did, however, manage to get a picture of him on the giant rocking horse: 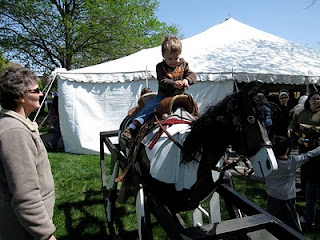