I've been trying to ride weekly recently. Gareth didn't have school today so I figured it'd be perfect to include him and do a ride to Golden Gardens. I'd promised a neighbor we'd come play in the morning, but figured we could squeeze the ride in post-nap.


Then Mal took forever to fall asleep. He likes to try to delay nap and other things these days. "Ummm, no. I need play 'ith my toys!" I'm not sure he ever did fall asleep, actually, but he had several long quiet moments, so I let him stay in there. This meant that it was 3:30 before we were headed to the park. It was sunny and in the 50s when we left. About halfway there I realized we hadn't brought Gareth's gloves. The ride there is almost all downhill, so his hands were very cold. At about the same point we hit fog and I realized neither of us had lights on our bikes. I tried to go very slowly down the big hill so that Gareth could easily keep right behind me. Once we were down the hill we were on a dedicated trail so I wasn't too worried after that and we made it to the park without mishap.

But it was very foggy and a lot colder near the beach. Malcolm was eager to get out, but didn't really want to play with anything and cried most of the time we were there. That's what he gets for not napping. Gareth put his hands in my gloves for a couple minutes to warm them up and then forgot his hands had been bothering him once he found some kids to play with. We only stayed half an hour because I was getting cold and Malcolm was getting crankier by the second. I managed to catch a picture in one of his few happy moments: 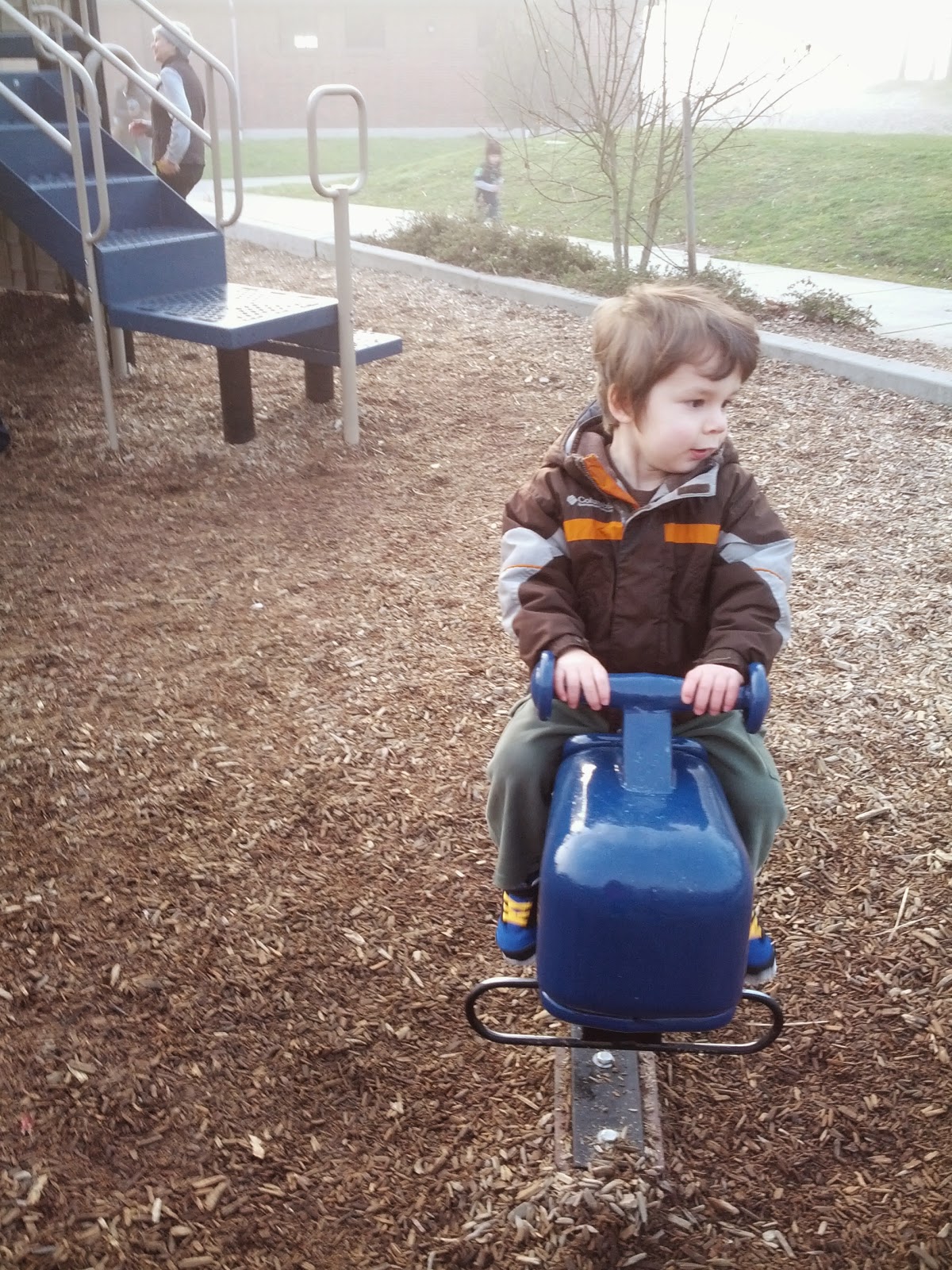 And had to attempt to get one of Gareth as well: 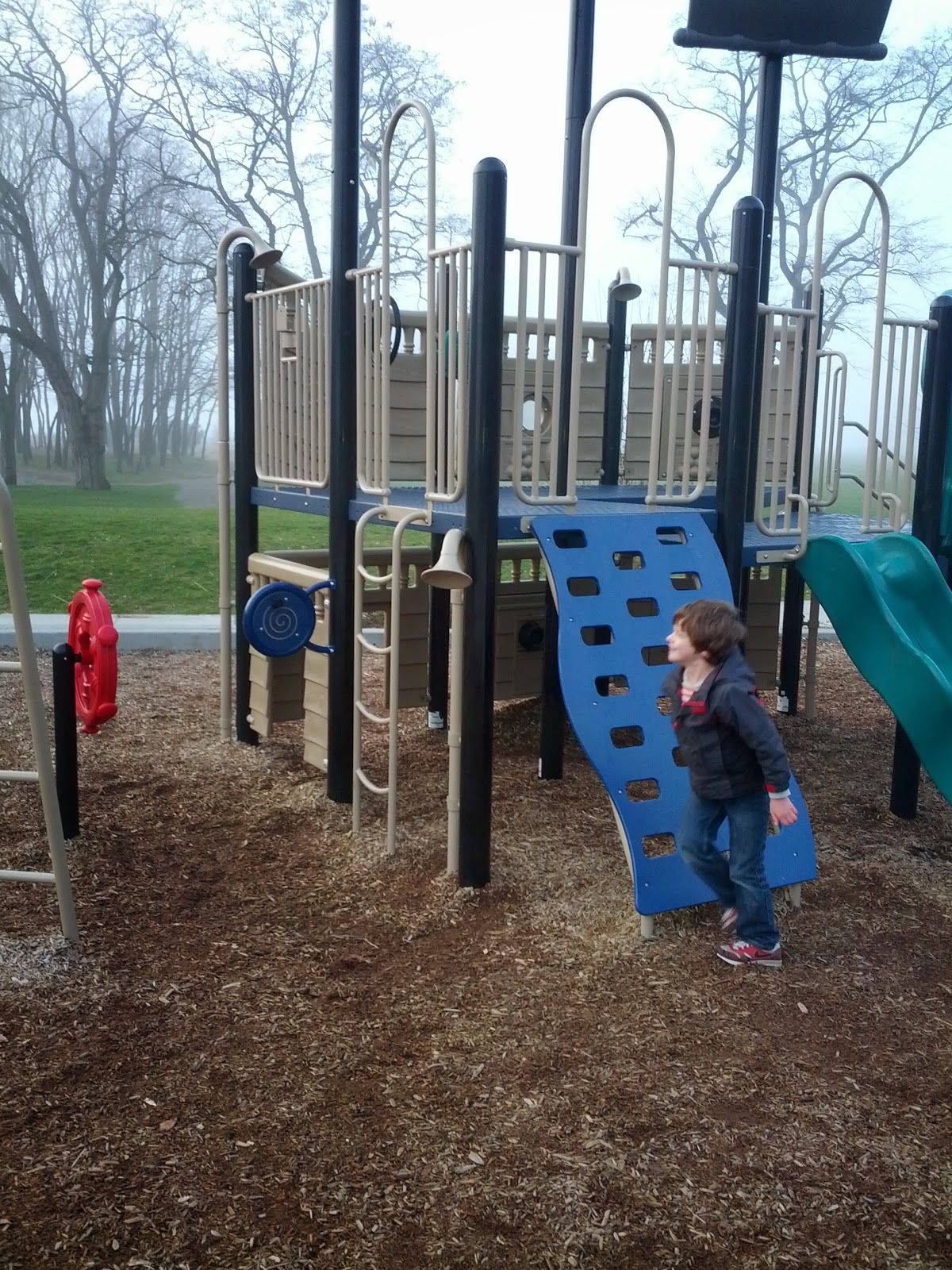 Then we had to head back home. It was 4:30 by this point and I was starting to worry about it getting dark and us having no lights, plus was worried about Gareth's hands. So I pushed us a little harder on the trail so we could get to the hill asap as that is quite a busy road. Thankfully the road has a bike lane all the way up the hill and for a little further along after the hill. And thankfully you have to work harder on the way home, which helped to keep Gareth's hands warm.

Gareth did an amazing job on the hill. His bike doesn't have gears, and it's quite a big hill. I was shocked to look back and see him right behind me. An older gentleman who clearly rides the hill daily passed us, giving Gareth encouragement as he passed. "You're almost there; doing really well!" I waved as he passed and then was surprised to see him stop and wait at the top of the hill. As we reached the top he clapped for Gareth and then slowed down and rode with us for a bit to tell me how he'd started riding with his son at about the same age and how when his son was older they did STP together. It was a very nice gesture.

A few blocks later I had us ride on the sidewalk for a bit to avoid the heavy traffic and no bike lane situation. At one corner we stopped and chatted for a bit about the hill. Gareth wasn't sure he liked it because it made his legs hurt. But when I told him he did a great job and that I was surprised he was able to keep right behind me he broke into a big smile. Then I promised him hot chocolate when we got home and suddenly this day was the funnest day ever.

After a bit we cut to a less trafficked street and before we knew it we were home. I wasn't sure it had been the best of ideas (colder and foggier than expected, Mal crying most of the time), but overall I'm glad we went. Partly to keep me riding, even if just a little bit, and partly because it's been a while since Gareth has done that hill and I think it was good for him to do it again. Plus I want to get him ready to ride to Alki Lighthouse (30 miles round trip, mostly flat), so need him doing some longer rides occasionally. Today's ride was 9 miles round trip, which is at least more than his usual weekly ride of 1.5 miles round trip (with a 6 hour break in the middle).
Posted by Erin at 8:45 PM 1 comment:

Gareth is still occasionally pulling out the plastic clarinet. I wish I'd caught him playing this back in the summer, because I think he was getting a better tone then. It sounds rather honky now. And of course he's huffing a lot - pretty common with beginners. I try to give him some pointers here and there, but am not giving him structured lessons at all as I want to just let him have fun with it for now and if he gets to where he's consistently playing then we'll see (hasn't happened yet - usually he'll play a lot one week and not touch it for months). Anyway, here's Merrily We Roll Along: 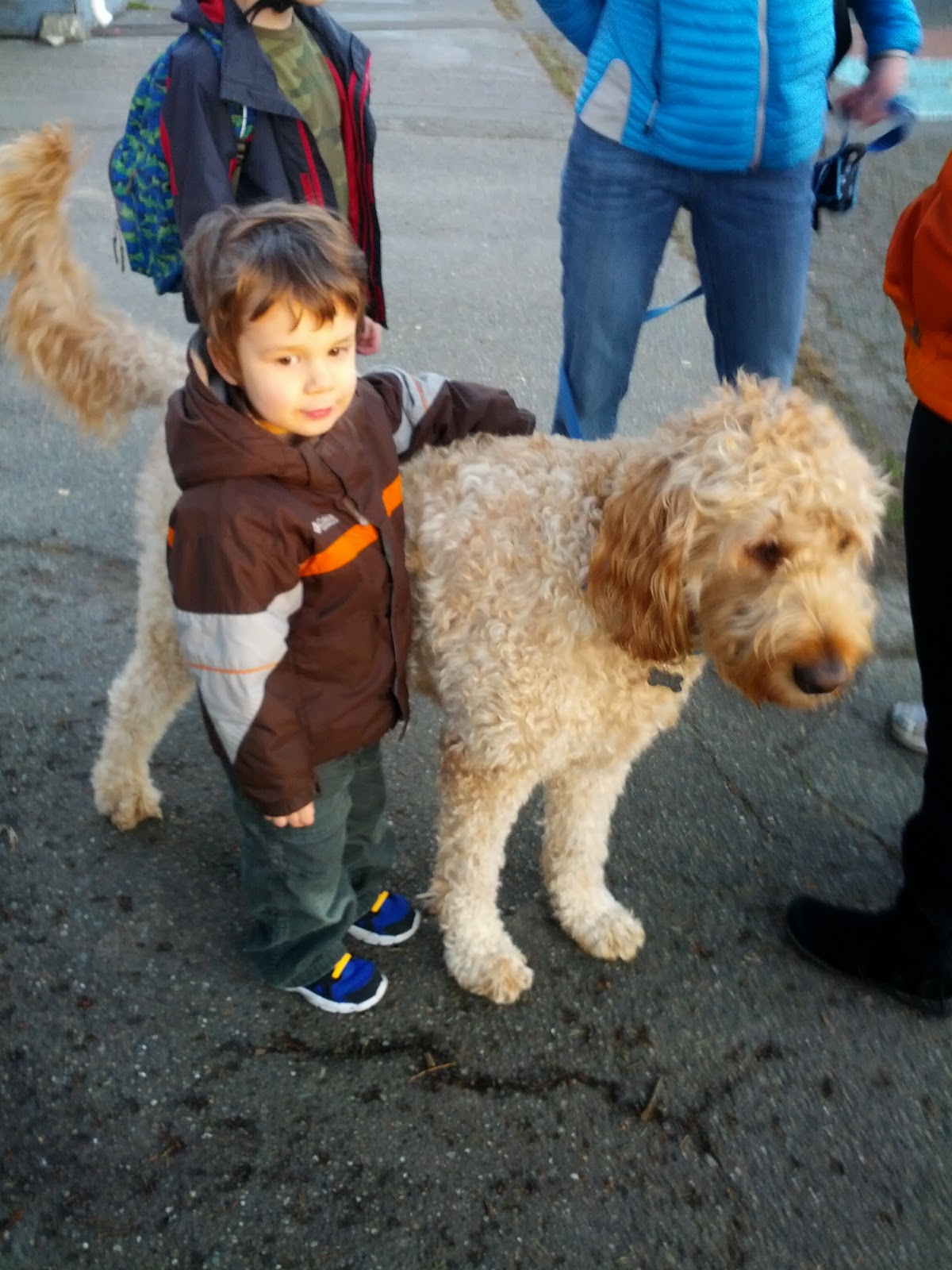 Today he happily touched Milo's nose and paw. He loved having Milo's tail wag on him, which would have freaked him out last year (and decided Milo needed some help from him with the wagging). And if Milo moved somewhere, Malcolm moved right along with him. I almost feel bad for Malcolm that he'll have to wait until he's grown and got his own place to get a dog.
Posted by Erin at 6:55 PM 3 comments:

Last year we decided to do a gingerbread house for the New Year since it's such a boring holiday and there are always lots of other things to do around Christmas. I learned from last year and made sure to cook our house pieces until they looked almost burned this year so they would stay nice and crisp. And, although the royal icing worked fine last year, this year I decided to make it in smaller batches so it would work even better (last year I made one big batch and it just doesn't store well so was a bit runny by the time we actually decorated the house).

I made two houses this year as we invited some friends to come decorate with Gareth. Unfortunately, Malcolm woke up from his nap before I got a chance to take a picture of the house the boys decorated on their own and which we sent home with our friends. But here's the house that I decorated with some help from the kids: 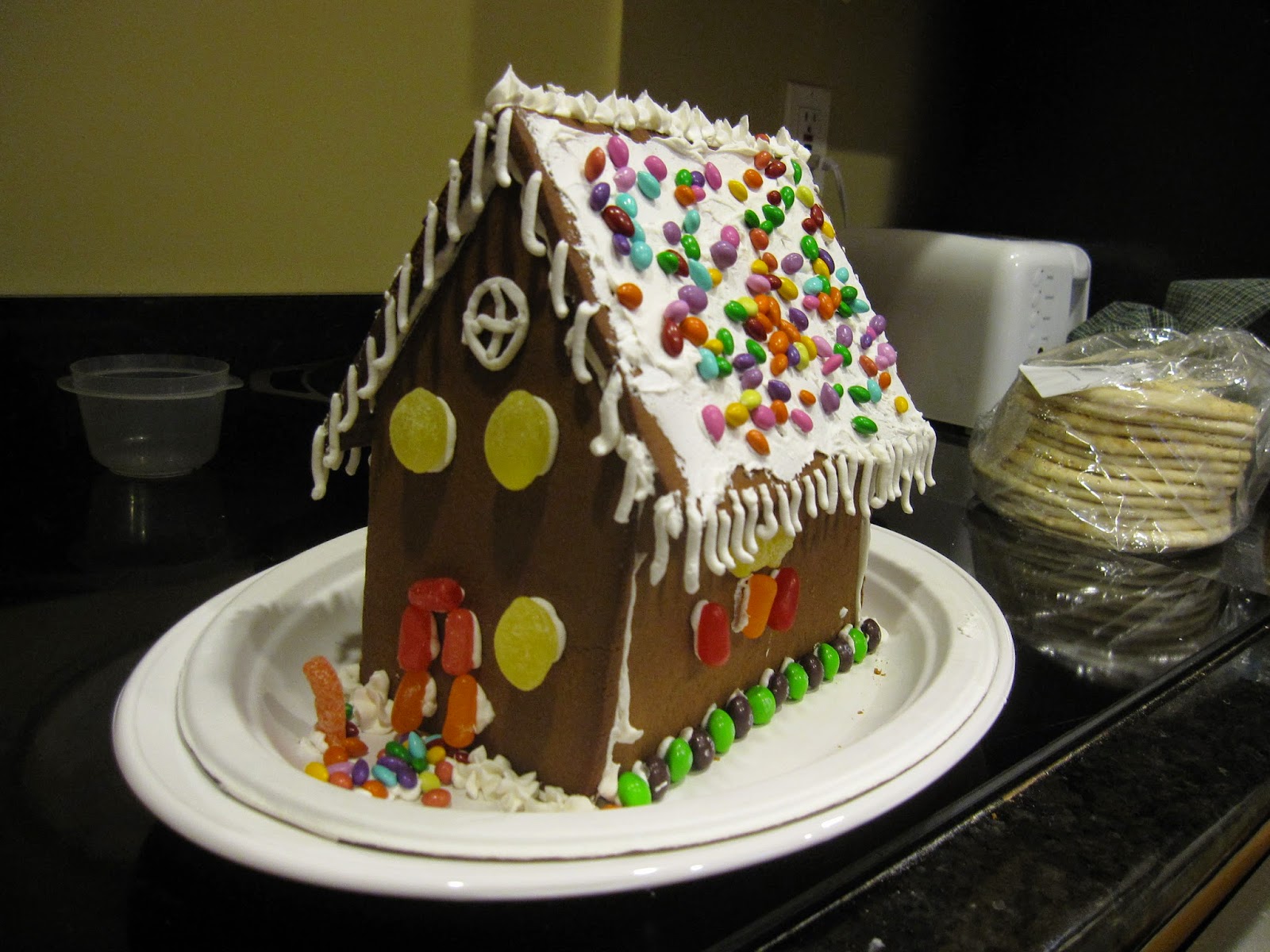 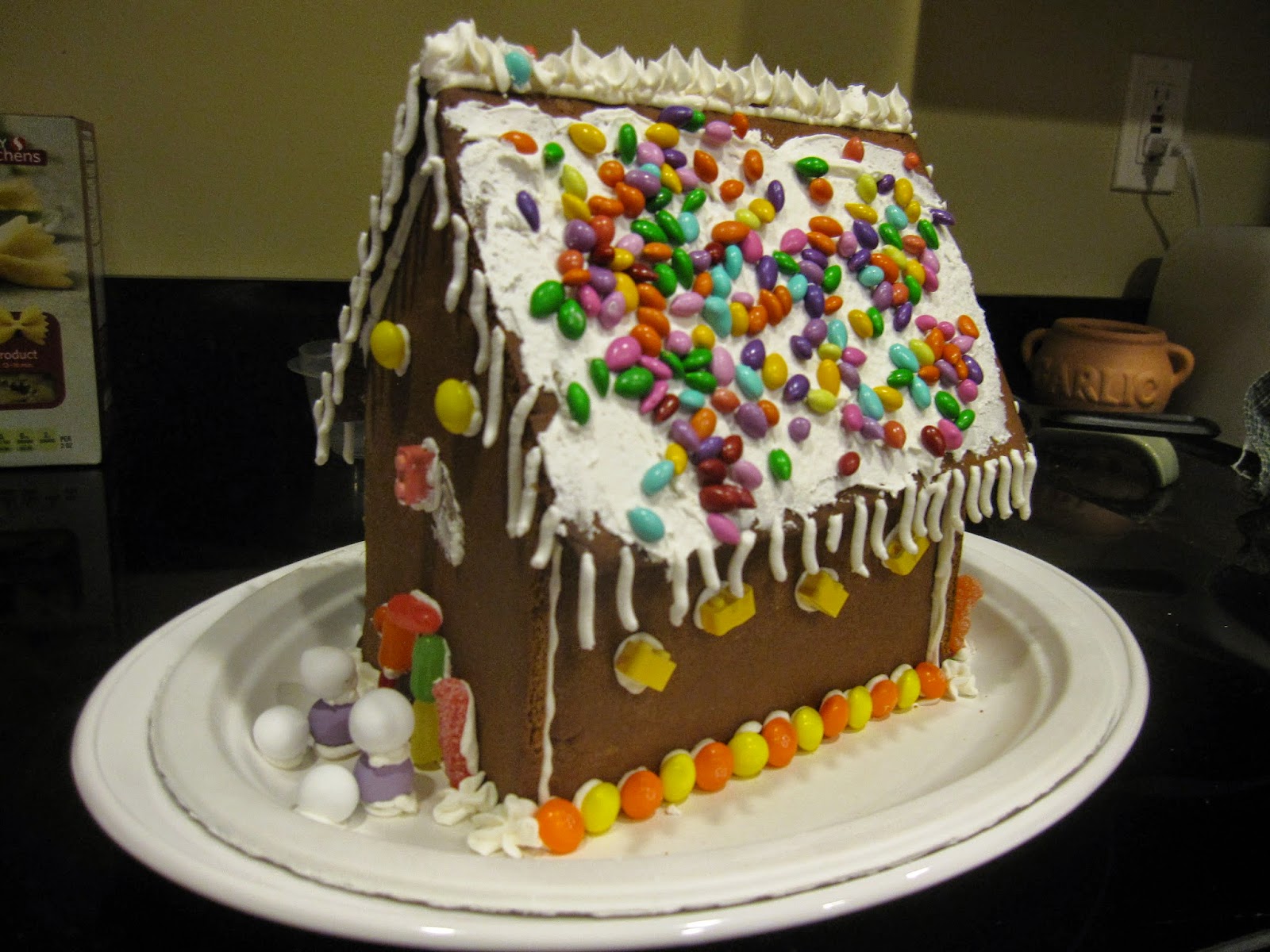 The boys actually helped me do this half of the roof and I think their side looks better than mine - they care less about if they're making a mess in the process and were totally willing to just toss the candies on, so ended up with better coverage. And I made an attempt at icicles this year. Not a good one, but an attempt. Malcolm wanted to destroy and eat the houses immediately, so I'm lucky I got these pictures. That kid is a nightmare when he sees candy, so we've had lots of tantrums over the last few days since we won't allow him to eat very much of it.

We got a puzzle of Seattle for Christmas, so that's what we worked on for New Year's Eve. We let Gareth stay up for a bit to sample the cheese and crackers - a double creme Brie, a Maasdam, and a Welsh cheddar. Gareth like the cheddar and the Maasdam best, though he did eat all of his slice of brie as well. We've been letting him watch Dr. Who, so we watched an episode of that while he was up. Not a good show for puzzle working because the show is actually good (and I hadn't watched all of the first reboot season before), so you spend too much time watching the show. After he was in bed we switched to the new season of 24 that they've got out, expecting it to be quite shallow and poorly written but still mildly entertaining, which is perfect for puzzling. And we were right. We were able to focus primarily on the puzzle while just listening to the show, looking up occasionally to watch a chase scene or explosion or comment on the insipid dialogue or the predictability. Anyway, here's our 2014 puzzle, finished yesterday: 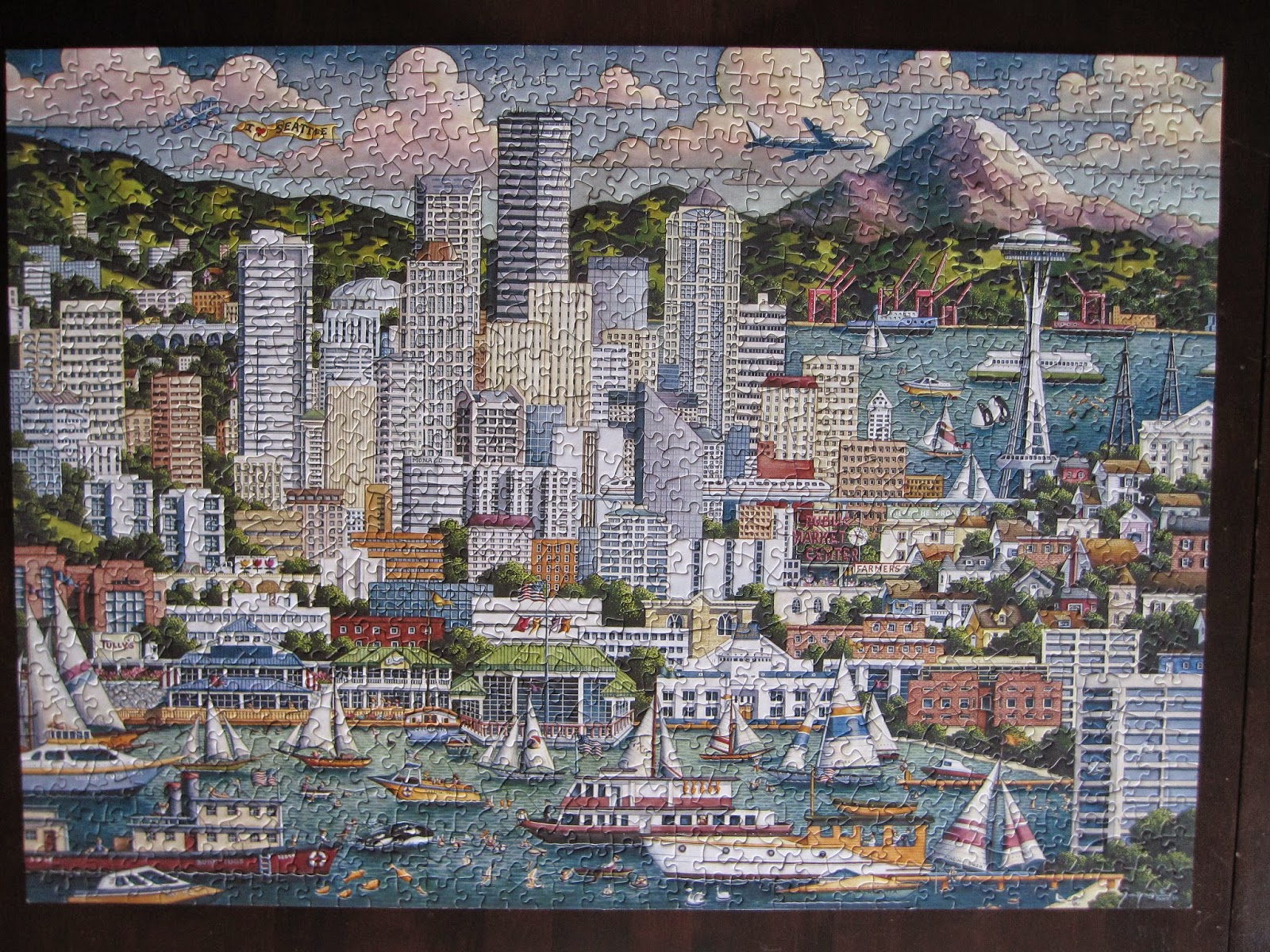