I have to start by showing off the turkey drawing I did on our countdown board. The family was all duly impressed. I was quite pleased with how it turned out, given I've never had any artistic talent. Thanks goes to the online "how to draw a turkey" tutorial I found. I had to adapt it a bit to work with chalkboard markers, but that was easy enough. It's been rather fun experimenting with the markers. 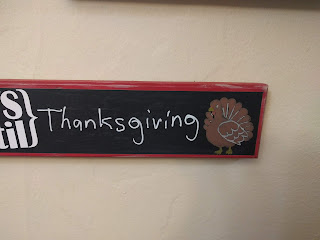 I made the mistake of letting Mal watch GBBO a week or so before Thanksgiving (oh, btw, his new favorite show is Curious Creations of Christine McConnell, which combines baking and Halloween - the definition of Malcolm heaven). It was pie week on GBBO, and one of the pies had a lattice top, which he promptly requested we make. I've stuck primarily to pumpkin pies the past few years (since there are only 4 of us, we don't need tons of pies) and have never actually made a lattice top for a pie since our traditional apple pie in our family has a crumb topping. Also, due to watching GBBO and then doing some online querying, I decided to attempt blind baking my pumpkin pie crust. That didn't work out perfectly - I've started using a butter crust in the past couple years, which works well generally. But things got a bit rushed on pie-making day, and I really should have chilled the crust again before putting it in the oven. The butter definitely leaked out of the crust. Also, I was totally guessing as to how long to cook it and I'm pretty sure I didn't leave it in long enough. But the sides were shrinking in quite dramatically (I had a weight in the bottom, but I don't think it was enough to keep the sides in place), so I got nervous about leaving it in longer. 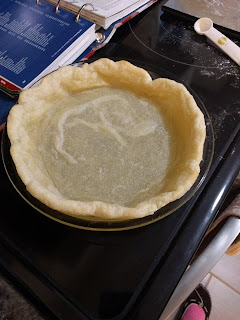 So that pumpkin pie basically boiled in butter while it was cooking. I didn't blind bake the other crust. I'm not sure they were drastically different. I'll have to work more on that skill, but the pies tasted good enough - no one in my family complained anyway!

I'm quite pleased with how the apple pie turned out. My BH&G cookbook had a good tip for how to easily weave the latticework. I ended up with extra apple filling and lots of extra crust, so the day after Thanksgiving I threw the leftover apples in a pie tin and covered it with crust, cinnamon, and sugar and baked it up. Apple pie without a bottom crust. 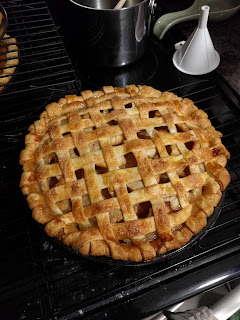 We had some lovely restful days together. Played some foosball (I joined in as well) and some video games all together. We also introduced the kids to "What's Up Doc?" and "Return of the Pink Panther"; Mal especially enjoyed the ridiculousness of Inspector Clouseau. 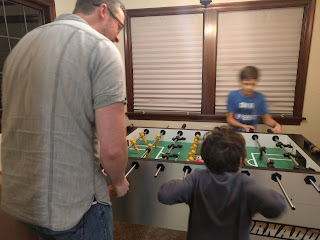 This past week I took (and passed!) the RD exam, the final hurdle before I could feel totally done with school and ready to go find a job. 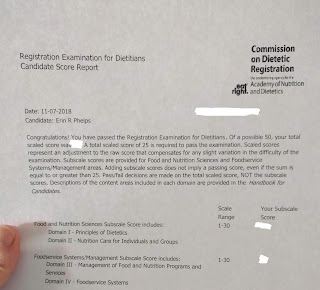 I'd planned to take it mid-October, but a mix of concerts, it taking more work than anticipated to get the kids' school years off to a good start, and lack of availability of the testing center meant that I had to push the exam back a few weeks. In some ways it was good timing because it prevented me from being able to pay much attention to election news.

By chance, my diploma also arrived this week. 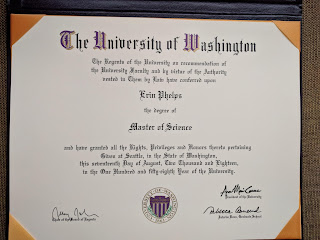 So now I get to feel very official. While it was kind of fun when an IRB reviewer accidentally addressed me as Dr. Phelps, I'm more than happy to stick with Erin Phelps, MS, RD.
Posted by Erin at 4:13 PM 3 comments:

We spent the Sunday before Halloween carving pumpkins while waiting for Ryan to get home from Albuquerque. Gareth took charge of his own, as usual, and this year I helped him out by helping Malcolm with his. Mal created the design, with some inspiration from a pumpkin Ryan made several years ago, and then I carved it. Malcolm helped to scoop out some of the insides, though he wasn't a big fan of how goopy that task is. 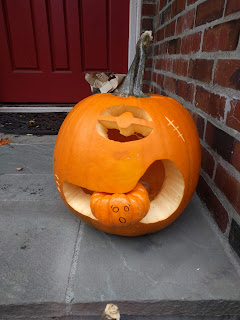 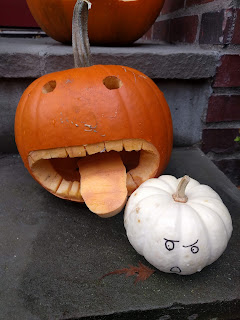 My mom made us a countdown chalkboard thing a few years ago. We finally managed to hang it this past summer and I found chalk markers to use on it (previous attempts with regular chalk hadn't been very successful). The boys were excited to put it to use counting down to Halloween. 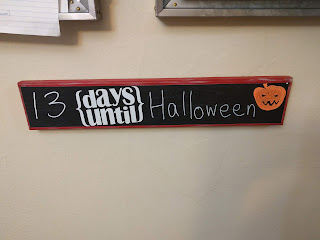 Gareth wanted to be Dr. Who this year; we chose the 11th doctor (Matt Smith), since that seemed easiest to put together. However, finding a boys sports coat that is brown is very difficult. So my mom came to the rescue and made one! 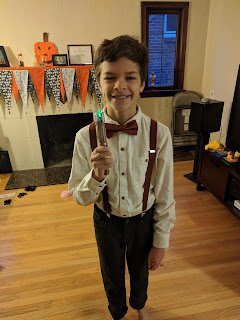 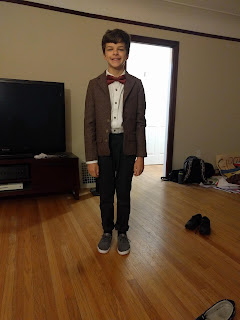 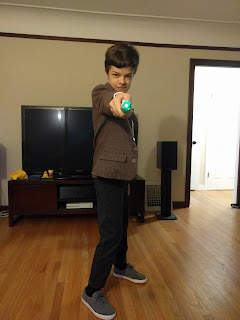 As he'll outgrow it quickly, we're trying to get as much use out of it as possible. He wore it to my concert the week before and received many compliments on it.

Malcolm wanted to be a Minecraft character. Initially I was going to do the whole cardboard box Steve thing, but then remembered that our chances of rain on Halloween are pretty high here in Seattle and I'd have a very disappointed child if their costume started to disintegrate as they were walking around. So we purchased a Minecraft diamond armor costume and diamond sword. We'll get our money's worth out of it for sure, since he wore it almost daily between when it was delivered and Halloween. 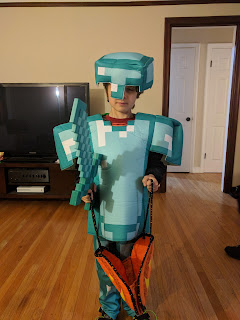 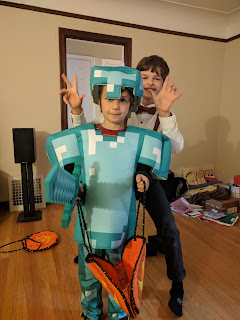 Ryan took the boys out with one of Gareth's friends (who dressed up as their DND character) while I headed to rehearsal. We lucked out and it wasn't all that rainy while they were out. I'm interested to see how many more years we have of trick or treating with Gareth. I know some of the other parents of his peers are anticipating that this year or next might be the last. It's strange to think we might soon be closing out that era with one child.
Posted by Erin at 12:00 PM No comments: