After deciding a couple of months ago that he only required breakfast and then a few bites of either dinner or lunch to keep him going, Gareth finally decided a couple weeks ago to eat again. He certainly has made up for his lack of eating previously! He's had a few days where he's eaten non-stop, asking for "munch" (lunch) just a few minutes after finishing his breakfast, eating two or three snacks and a full lunch and dinner as well. After a couple weeks of that he seems to be tapering off a bit, but he's still eating well at meals, so I guess he's decided moderation between the two extremes would be best. He's starting to hit the "terrible twos", throwing little tantrums complete with lying on the floor leg-kicking and he's getting more intentionally mischievous. But with that comes his greater attempts at communicating with real words. He will often repeat the last word of any sentence I say and is getting more willing to try out new words. Here are a few new pictures of him: 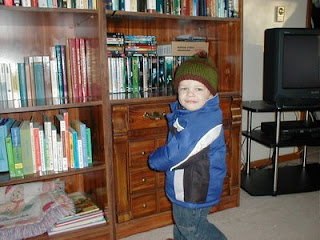 Wearing the hat Grams made for him. 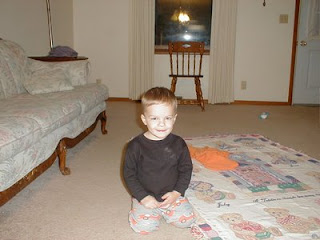 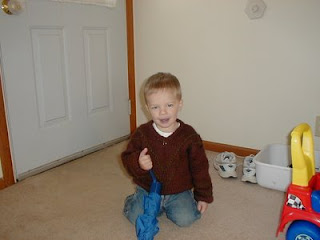 A sweater from Grams.
My mom's been having fun knitting things for Gareth (and even for Ryan!). We've appreciated them a lot since we've had such a cold winter and had to keep our house on the chilly side to keep the electric bill reasonable. We've even been able to use the sweaters in the cold mornings of the past few days. Thanks, Mom!

And now on to the second part. Ryan really likes German Chocolate Cake. A lot. I made one several weeks ago, but he wanted more last week. I was busy cleaning up the kitchen from dinner, so he went ahead and baked the cake himself! (We make it from scratch, so it really is an accomplishment.) All I did was take the cakes out of the oven and put it together (which I messed up by not putting enough frosting between the first two layers - oops). He made the cake and the frosting all by himself! I was very impressed and, aside from my mistakes, it turned out perfectly. 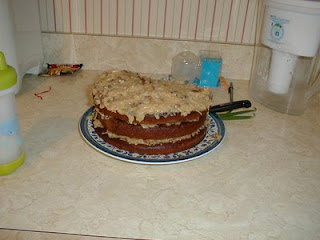 The unfortunate thing about this cake is that it never lasts as long as it seems like it should...

To complete our role reversal, I'm letting Ryan try to teach me how to program. I'm having him teach me Java, figuring I'd rather learn that first and Ruby or Python later rather than the other way around. After hearing him talk about the students in his classes at school, I'm hoping my ability to grasp the subject doesn't disappoint him. It'll probably be a long process since we're both quite busy, but I'm enjoying learning so far - it's good to be cleaning some of the rust out of my brain!
Posted by Erin at 5:42 PM

Sounds like you guys are having fun (despite tantrums)! Any pictures of the scarf??? I'm really interested in what it looks like. Sorry - I know - knitters have the most one-sided requests.

Gareth is adorable, as ever! I really hope we get to see you guys this summer! Good luck programming - Scotty likes telling me theoreticals, but I'm not sure I'll ever go to learning it exactly.

And good job on the cake, Ryan!

Ha, when I first saw the title to this, I thought, "Is that a typo? Ryan bakes, Erin programs??" :) Sounds like fun. In the dorky, married style, of course. :D