There have been many benefits to my working a few hours each week. The fact that I'm not committed to an asylum yet being high among them. But, aside from that, I think my favorite has to be that it gives Ryan time to be a stay-at-home-dad. This does, of course, depend on his school schedule, but for three out of four semesters so far it's worked out. I feel that it's definitely had a positive impact on his relationship with Gareth. Gareth thinks Daddy is pretty awesome now and is eager to be doing whatever Daddy is doing. If Daddy's at the computer then Gareth wants to "play Mario" (though that's not exactly what Daddy's doing, obviously). If Daddy's eating peanuts, or cinnamon roll, or apple, Gareth needs some as well. If Daddy's drumming, Gareth must also drum (And with the same object. Which means if Daddy's drumming with a cup coaster then Gareth will run and grab one and join in). And, if Daddy is "sleeping" then Gareth must also "sleep": 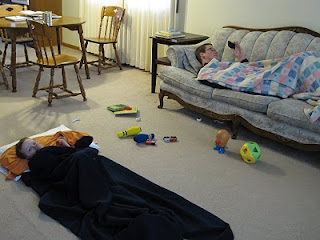 I wish any other kids we have could get the same opportunity. I can't help thinking it would be ideal if we could both work part-time, each of us working on the days the other one isn't. How awesome would it be for our kids to have both parents as stay-at-home-parents? So, while I sometimes think longingly of having a decent paycheck again, being in graduate school definitely has its advantages.

If you want to see some more of Gareth check out our neighbor's blog here for some pictures of Gareth with his "little sister". These two, if they get their way, see each other every day, beat up on each other, love each other, and totally want to switch moms (though I'm sure if they did they'd change their minds once they realize the other mom would tell them "no" just as much). Gareth will be devastated when we return from Seattle this summer and he realizes that she's gone.
Posted by Erin at 12:58 PM

And you guys are heading to Seattle? Fun. You'll have to let us know how you like it.