We very well might have lived in Seattle the rest of our lives without ever entering the Space Needle. It's quite expensive (eighteen dollars a piece or thereabouts) and to us the cost isn't worth a view of the city. But we have a friend who is working at the Space Needle right now and he's able to take a few others up with him for free. So a couple of weekends ago we hopped on the bus and met our friends there. 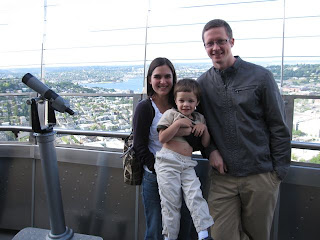 Here we are, with Lake Union behind us. Gareth really wasn't interested in taking a family photo - I was having to fight a bit to keep him in my arms. What he wanted to be doing was looking through the telescopes at the boats on the lake, the buildings, whatever he could see. He got to do plenty more of that after we took the picture, so in the end he didn't mind that we put him through one picture. On the elevator ride up he made most of the adults chuckle as he said, "Wow!" over and over and over as we went up.
I'm glad we went (especially since it was free) because it made quite the impression on Gareth. When we were driving past the next weekend he was excited to see "the building we went to yesterday!" from the car.
Posted by Erin at 2:20 PM

$18 a person? That's ridiculous. And I thought $10 for the St. Louis Arch was obscene. Glad you guys got to go up for free!