After doing very little of the work last year, I'd say I did the bulk of it this year. My mom also helped out a lot by making the pattern for the costume this year and spending time on the phone with me whenever I had questions. This year's costume is proof that making your own is certainly not always less expensive. Buying knits at $15 per yard will definitely run up the cost. But we needed a medium weight knit for it to lay nicely, so spend we did.
We started the Halloween weekend by dressing Gareth in his (almost) finished costume for preschool on Friday. I forgot that the kids all have to wash their hands on arrival at school, meaning that the costume was quickly stained with blue paint. Ah, well, at least we knew it'd come off easily when the time came. It was raining when I picked him up, and I stupidly let him run from the car to the house (they're supposedly doing sewer maintenance on our street, so we can't park in front of our house for a while - though I've only seen them working out there twice, and then only for half the day). He made it to the house no problem and then promptly slipped and fell, getting mud all over his costume. Luckily the parts that I needed to adjust were spared so I'd be able to fix them rather than washing them.
Saturday we went to a pumpkin carving party we'd been invited to. It was down in Maple Valley on a ranch owned by the in-laws of one of Ryan's co-workers. We were a bit late, but it was a beautiful drive. If it weren't for the sometimes two hour commute by car and the work of living on such a place, Ryan would be incredibly tempted to move to a horse ranch. Gareth had a great time driving around the battery-powered toy cars they had and going on a hay ride. Ryan worked really hard and managed to carve this pumpkin: 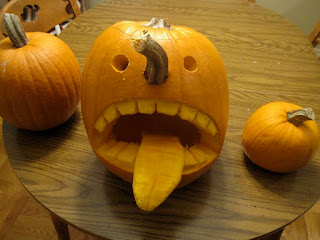 The stem accidentally broke while removing the top, but he was still able to find a use for it later. 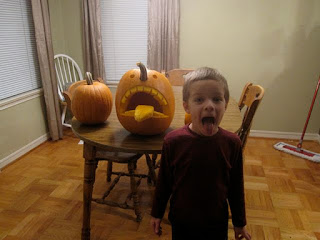 Sunday was spent washing Gareth's costume and finishing up the adjustments to the cape portion. Then we were able to clean up the basement, which was quite a mess after my spending a couple weeks working on the costume rather than cleaning up or folding laundry or other such things. Once we got some clean-up done Ryan started on Gareth's little pumpkin. 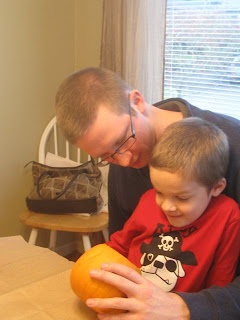 Gareth "helped" for a little while. Ryan gave him some face options and he chose what he wanted. But when it came to digging out the pumpkin and carving, that was a little beyond Gareth's skill level. He soon left Daddy to work and came over and helped me make up a few batches of popcorn for our traditional Honey Popcorn recipe. He was very excited about the finished product, though. 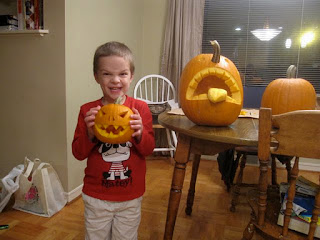 I carved my pumpkin after rehearsal that night while Ryan made the coating for the popcorn. Here are all the pumpkins together: 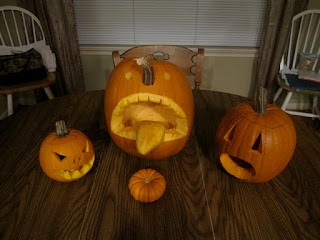 Halloween morning I took Gareth to get his head shaved and figured I'd get mine cut while I was at it. I started getting Gareth's paint on at about 2 pm on Halloween. It needed to dry so we could apply a fixative (otherwise it rubs off on everything, the fixative prevents this, but doesn't protect against water). I underestimated how long the head arrow would take, since I hadn't done a complete arrow on Friday since we hadn't shaved his head yet. (We did, by the way, try to get a bald cap, but couldn't find any in a child size and the adult size one just looked ridiculous.) We got all that done, and put the costume on then off we went to Ryan's office where they were having trick-or-treating from 3 - 5 pm. We got there about 4. Ryan's team is pretty lame, as only a couple of them were passing out candy. :) Even those who were in other teams frequently just had it out on a chair so they could keep working. But a few stopped to notice the kids. It was a good place to go do some trick-or-treating because I knew Gareth's costume wouldn't be widely recognized later that night. Ryan's workplace is full of people who would know Gareth's character, and who thought it was a well-done, awesome costume. I was able to get all the gratification I needed for the hard work I'd put in. Gareth also got this cool balloon animal/hat: 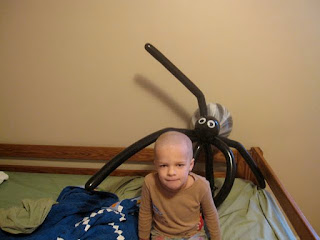 It used to have another leg, but one of them popped last night shortly after we got home. We got home, ate some quick dinner, then Gareth and I left to meet up with his friend and go trick-or-treating in Montlake. It was a good neighborhood to go in and lots of fun, though it did start getting quite cold toward the end, but I think next year we'll stick around our neighborhood. I found I want to just be able to be home after we're done, rather than having to drive elsewhere and therefore drive back home after we're done. I was right when I figured that there would be little recognition of Gareth's character, but a few people knew it and were especially impressed that he'd shaved his head for the costume. I'm not as good about remembering to take pictures as Ryan is, so we ended up taking pictures after we got home. All Ryan needs to work on is not getting the camera wrist band in the pictures. :) Here is Aang, from Avatar: The Last Airbender: 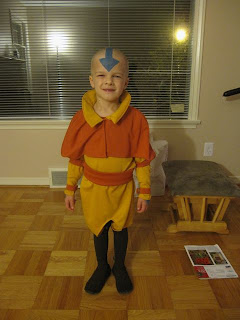 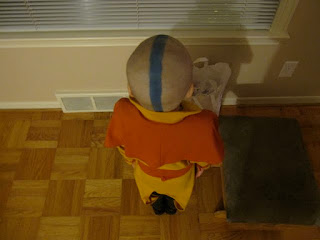 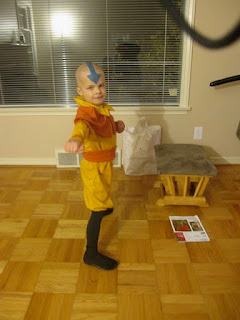 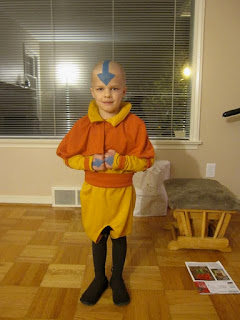 The main costume I sewed from the pattern my mom made. We purchased some brown tights and then some water shoes, which I spent four hours sewing brown fabric onto (no, I couldn't find any brown water shoes for kids - very lame). Unfortunately we weren't able to make Aang's staff for the costume, but that would have been very cool. Maybe if we get to re-use the costume ever we'll be able to put all our work into that. He brought home three pounds worth of candy. Usually stowing it away and rationing it out works pretty well, but he's having more difficulty with that this year. I've already dealt with a couple tantrums this morning over not being able to have candy at 8 am. I was excited that we might actually get trick-or-treaters this year. We got three. So that's kinda sad, but now we know to only buy one small bag of candy next year.
Posted by Erin at 10:44 AM

Wow way to go on the costume and the pumpkin carving! Everything looked so nice.

I would not have guessed the use of the broken stem as the nose wasn't planned. I really like the pumpkins.

Great job on Gareth's costume. We were not at all as creative, and it was still a lot of work!