Our Couch (and some holiday thoughts)

So last weekend our couch was delivered. We'd been a bit worried about if it would fit through our entryway or not, which requires it to come through the door and then only has 4 feet before you hit a wall and have to turn to get into the living room. We obviously chose a good size of couch for our house, since it came in quite easily. We were expecting they might have to take off the legs to get it through the door, but they didn't even have to do that. The whole getting it in the house process took about two minutes. Gareth was overly excited and wanted to start jumping on it right away - something which we've been asking him not to do ever since. He always replies to our reprimands by saying, "But I'm not jumping! I'm playing!" Ah, yes, because if it's playing that involves jumping on the couch that makes it all okay. 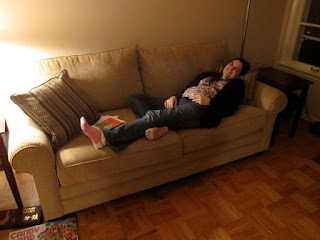 And here's a view of Gareth right after the couch was delivered: 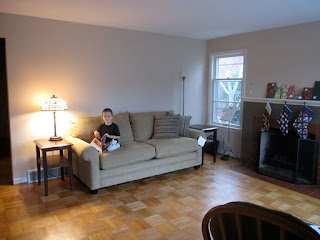 The room is starting to actually look like a living space rather than somewhere we stick random stuff we don't have anywhere else to put! I am hoping to find a replacement shade for the floor lamp one of these days (anyone know where I can find one?).  Our next purchase will be a TV to go across from the couch and we're hoping to purchase an area rug for the floor before next holiday season. While we still can't entertain tons of people, it is nice to know we could invite another family over and have a place for them to sit that's not a hard floor.

In the second picture you can see some of our holiday decor, sort of. There isn't much of it anyway as we don't get a tree when we're not going to be home on Christmas. I'm excited for next year when we'll have one. It's rather fun to have a fireplace mantle to put some things on. Next year we'll have to purchase some stocking hanger things, because the push pins currently holding them in place wouldn't win a match against gravity if we actually filled the stockings. And since Ryan wants to occasionally have a fire in the fireplace next year, I'd rather not have our stockings go up in flames.

The packages across the mantle top are from the advent presents my mom sends us every year. Usually I attach them to a red and green rope and hang them like a garland. I didn't have time to do that right away this year and in the end decided that I liked having them lined up across the mantle.

Gareth is, of course, very excited for the holidays. He had a couple of days this year when he asked lots of questions about Santa. I'm wondering, does anyone else feel bad pretending Santa is real to their kids? I'm very torn, because I loved believing in Santa when I was little, and really wasn't particularly upset or disappointed when I realized Santa wasn't real. But I feel horrible lying to Gareth about it, telling him that Santa can fly because he's magic and other such things. I see how easily he accepts my explanations and I'm not sure that's something I want to encourage. I don't sit around telling him other myths are true. Usually I would encourage him to question. Would it diminish his excitement any if we didn't pretend Santa was real? At the same time, though, I don't think it hurt me to believe in Santa as a kid, so for now I continue to pretend the myth is real.

Nice couch! Yeah, the whole intentionally lying to your child thing is kinda wonky, but like you said, I don't think it hurt me at all. It's kind of fun to have a little magic.

I haven't entertained the thought much until this year. I could see the whole Santa thing feeling kinda odd trying to convince your kids that this man is real, but as was already said, I had fun with it when I was a kid. I don't even remember when I found out it wasn't true, so it must not have hurt me.

Just the other day (yesterday, actually) my mom and I were talking about everyone who is pregnant and she asked if I knew if you were. I didn't.

But that shot on the couch kind of cleared that up...congrats! :)

I don't have a problem with talking up Santa, but I've read lots of other blog posts and such of people who do, so you definitely aren't alone there! For us, even though we talked about Santa, he really only left a couple presents for each person. Everything else was from Mom and Dad. (I found out later this was because my Mom wanted credit for all the work she put into Christmas! Good for her!)

Lovely couch! We've never bought one-- both ours are hand-me-downs! Mostly because I KNOW we wouldn't be able to stop the kids from jumping on it, so I hate to spend the money. But seeing one that looks so nice and new and that you actually picked out yourself sure is making me want one...!

What a nice couch you have picked out! I can't wait to see it in person.
I believe you are on the right track when you say that finding out the truth about Santa is not devastating. It is probably because although parents perpetuate the myth, they know that there is so much more to Christmas than Santa and so can steer children towards those traditions and activities as well. That's part of the magic of Christmas.
When my kids tried to tell me there was no Santa, I would reply with a twinkle in my eye that I guess they would not be getting any gifts from Santa this year. They enjoyed "playing the game" with me.