Here's what Ryan's hair is looking like these days: 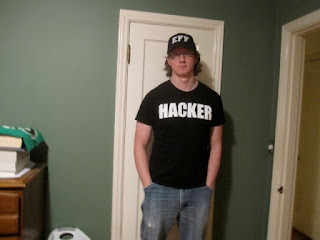 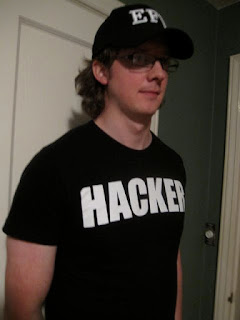 Okay, so I was taking blurry pictures that night for some reason, but you can still get the idea. If the baseball cap were off, you'd see that the front is starting to be annoying and get into his eyes a lot. It's curlier than he'd like, so Ryan often complains about how horrid it looks at the moment. Still holding out hope that it'll straighten a bit as it gets longer and weightier.

I haven't had a chance to take a shot of Gareth recently. I'm still thinking of taking him to get it trimmed/evened up a bit, because I think it'd look less ratty if the sides were a bit closer to the same length as the back. Maybe we'll work on that over winter break. 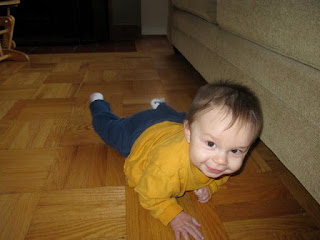 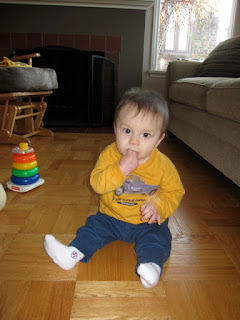 This is the first time I felt comfortable enough to leave him sitting on his own for a bit (long enough to grab the camera and take a picture). Up until just a few days ago he was a pretty wobbly sitter, falling over at the first sight of anything he wanted to grab (so, pretty much instantaneously). But since I took this picture his sitting skills have improved considerably to where he'll stay sitting for several minutes at a time.

No crawling yet, I think partly because of our wood floors. It's really hard to keep your knees under you when the floor is so slippery! Plus, because of the slick floor he can move quite quickly with his army crawl/scoot movement.
Posted by Erin at 11:26 AM