We don't usually do much for Valentine's Day. I've never been very into it, beyond my elementary school years when valentines for classmates were compulsory. Occasionally Ryan might get some flowers or I might make a meal that I know Ryan loves, but we keep it pretty low-key.

This year was no different. I made heart-shaped sugar cookies for Gareth's valentines, baking the cookies on Monday, frosting them on Tuesday and packaging them up on Wednesday. Gareth helped cut out paper hearts and addressed all of them over a couple of days. We successfully passed them out to classmates yesterday morning. (Side note: kids are getting waaay more candy in their valentine boxes than we did when I was a kid. Gareth has 26 kids in his class and almost every one included a lollipop or pez or fun dip or some such with their valentine. I like doing the cookies because I remember enjoying that tradition from my childhood, but I'm starting to rethink that idea because holy crap he had a ton of sugar yesterday between their party and the valentines!)

We'd had some extra cookies which Ryan and I had enjoyed throughout the previous few days, but which were pretty much gone by yesterday. I wasn't worried about it because, like I said, we don't make a big deal of the day. We had dinner, Ryan went to the gym, I got the boys in bed and enjoyed reading a book while I had the chance. Ryan came home carrying bananas and some cookies and I prepared to set aside my book so we could watch something together. Then he surprised me by saying he had a Valentine surprise and to stay where I was. Out he went to the car, with me expecting him to come back in with flowers (he had just come from the store after all). I was shocked when he walked back in with this: 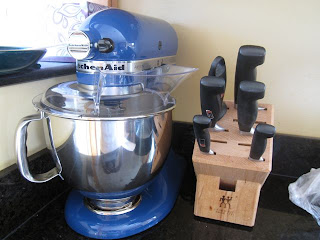 (The mixer, not the knives; we've had the knives since before we were married.) I mean, yes, I've been wanting one for ages, but I really wasn't expecting it last night. Maybe next Christmas or the next, certainly not randomly in the middle of the year. Anyway, someone at work had ended up with an extra and Ryan grabbed the opportunity to get it for a great price. It's perhaps not the color we would've chosen ourselves, but it actually looks quite nice with the black countertop/yellow paint. I'm still rather giddy from the surprise today, and excited to try it out and see how it does. I'm just having a hard time deciding what to make first...
Posted by Erin at 2:16 PM

I loved my kitchenaid and was sad to leave mine behind in the states (the voltages are different here and I didn't think it would make the transition).

So, what did you make?

Surprises like that are the BEST! I'm so excited for you! Our kitchen-aid was a wedding present from the wife of my dad's co-worker... and whom I have STILL never even met! It pays to rub shoulders (or have your dad rub shoulders, I guess) with rich people!

Enjoy your kitchen-aid, they really are great to have! I recommend plain old cookies... How can you go wrong?

OH. And be careful not to leave the attachments screwed in. We did that once and accidentally flipped it on while the other attachments were in the bowl and it stripped the gears and broke! It took finding a licensed repairman and $90 to get the thing fixed! So be careful!