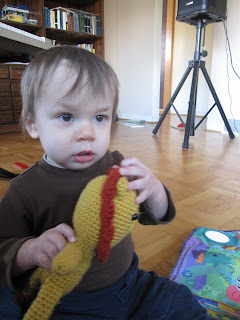 Well, the little Malcolm boy has been one for a few weeks now. The day before his birthday we got some snow (none stuck where we are) in the morning, hail in the early afternoon, and sunshine in the late afternoon. But, like the day he was born, his birthday was beautiful and sunny all day. He even got to enjoy our outing to the toy store and market sans jacket.

Gareth was extremely excited for Malcolm's birthday. I heard him tell Malcolm "happy birthday" twice before I was out of bed. And he wished him a happy birthday a couple more times through the day. Our outing to the toy store was for Gareth to select a gift for Malcolm which, aside from wanting items for himself and being distracted by toys not suitable for Malcolm, he did very eagerly.

We had Smoked Gouda mac 'n cheese for dinner, since he had seemed to enjoy that before, as well as peas, which are a favorite of his. I made brownies instead of cake (I learned with Gareth's first birthday that putting lots of effort and time into a one year old's birthday cake is not worth it). Malcolm discovered that brownies are delicious and happily dug into what looked like a huge piece of brownie once it was in his hands.


After dinner, we opened presents. Malcolm seemed to get the hang of it quickly, tearing off strips of paper. Initially he wanted to eat the paper, but quickly learned that after he tore off a strip, it went to Daddy, so he started handing the strips to Ryan instead of trying to eat them. He loves stuffed animals, so Gareth's selection was a big hit. Since Malcolm is a destroyer of board books, we purchased him an indestructible book and some stacking cups, since that's one basic toy we don't have. And he got an awesome dump truck and a book from Grandma and Grandpa. He received a duplo block train as well from Gram, which was a big hit with Gareth. I had to remind Gareth several times that the train was actually Malcolm's toy and so he needed to let Malcolm play with it, even if that meant that Gareth's perfect train would be destroyed.

Malcolm also got to enjoy, as much as a one year old can, video chats with his Gram and Grandma and Grandpa (as well as some aunts and uncles).

We won't have his one year checkup until next week, so no growth stats yet. But he does a lot of typical one-year-old things. He babbles a lot and is finally starting to brave crawling with his tummy off of the ground (if only for short periods of time, because it's usually just way too hard and why would he want to put that much effort into moving from one place to another?). He pulls up on just about everything he can, but is not at all eager to try and take steps anywhere. He loves flinging his sippy cup down to the floor after he takes a drink, much to the growing annoyance of his parents. He's starting to understand "no" and occasionally listens and complies when we say it.
Posted by Erin at 11:49 PM

Happy Birthday to Malcolm! A year just zips by!