We've been having a great summer thus far. Gareth and I are about halfway through his school papers - deciding what to keep and what to toss. We've done some yard work and some household cleaning that was long overdue. There's a ton of work left to do around the house, but we've been having some fun as well.

Gareth was thrilled when we let him use some of his saved birthday/Christmas money to buy himself a large lego set. He opted for a Star Wars X-wing Starfighter. It took him a few days to build and he's enjoyed playing with it ever since. When a younger friend broke the wings off the other day he was devastated. It'll be good for him to have to rebuild it. He wants to go buy another large set, but we've told him he needs to save some of his money and will have to wait a while before buying another large item like that.

The first week of break we also went to the Science Center with some friends. They have a new exhibit that Gareth loved. And Malcolm always loves the play area. This time he was big enough to explore the water trough a bit.

Gareth has spent a fair amount of time almost every day riding his bike up and down our street. He's gotten to know three boys who live a little bit down the block and a girl his age who's also further down the street. She and Gareth have spent a lot of time riding back and forth between the two houses. There are also a couple families on the street who have three year olds and babies right around Malcolm's age, so we've had a couple of playdates with them as well. Not as interesting for Gareth, though he's quite good about playing with the younger kids, and it's a chance for Malcolm to get to "play" with some other babies.

Last week we made some sugar cookies and used a decorating set I'd purchased a while ago to frost them. Gareth had a lot of fun, and making decorative stuff was a lot easier with the supplies we now have than with traditional frosting bags. We also got Gareth signed up for the summer reading program at the library. He's been doing a lot of reading.

Yesterday we headed out with some friends from the street to check out Golden Gardens. Gareth has been before with other friends, and I walked down briefly with a friend just before the end of the school year because he was aghast that I hadn't been and walks down there every day. But this was my first time taking both kids and intending to stay to play for a while. We got there at 9:30, which was good since we drove and it's easier to find parking there that early.

Malcolm started out on the swing and was happy there for a good thirty minutes or so. 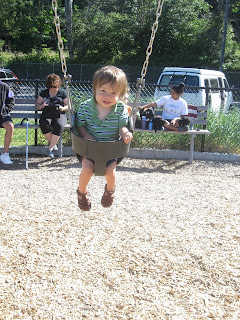 Then he checked out the wood chips (always a favorite) for a while. 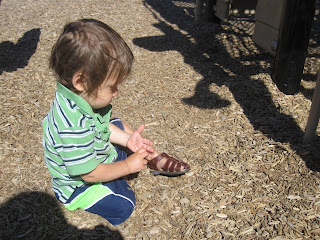 Gareth climbed on the cool rope structure (he's in the bright green shirt). 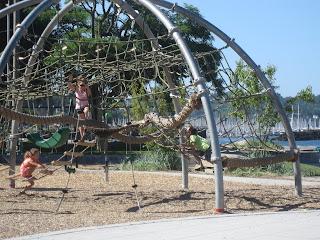 After a while we headed down to the beach. Malcolm was pretty content to hang out on the towel and carefully explore the sand. He eventually got a little braver. I took him down to the water and, while he didn't completely freak out, he wasn't having the time of his life either, so we headed back to the dry sand. 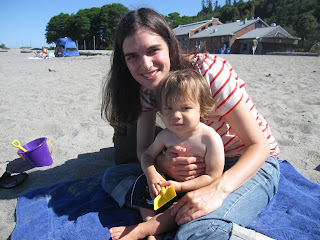 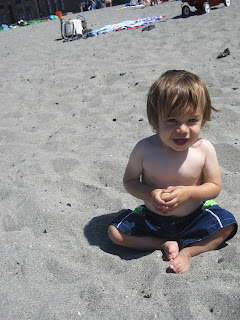 Gareth enjoyed having his feet and legs buried in the sand. After being at the park for three hours, we got ready to head home. Malcolm and Gareth spent a few more minutes on the playground, checking out the spinning disc things and the ropes and swings again before we drove home. 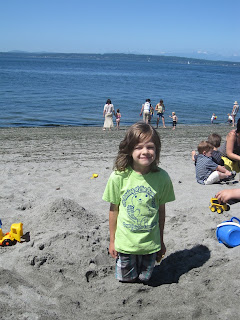 The playground here is one of the best I've been to. They redid it just a couple years ago and it's awesome. Appropriately ship-themed since it's close to the water I guess.
Malcolm was asleep within a couple minutes after leaving and didn't even wake up when I brought him inside - one sign of a very successful outing. 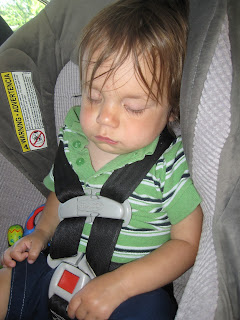 The next couple weekends will be busy for me with band, but we should be getting out on some hikes soon and I'm hoping to hit the science center a few more times and possibly the arboretum as well before school starts up again.
Posted by Erin at 8:22 PM

Those cookies look awfully tasty. Glad you guys are having such a fun and productive summer!