Wednesday should have been the first day of school, but instead it was the first day of the strike. The strike continues today. I'm assuming it'll be at least Monday before school starts. I don't mind, as I side with the teachers. And as the days will have to be made up, I'm rather hoping they take them from the stupid mid-winter break first. Do the kids really need a week-long break in February, when they've barely gotten back from their two-week break at the end of December and had a few more days off since then?? Not to mention, mid-winter break is a child-care nightmare for working parents and for me the days I have class.

We had a friend of Gareth's over Wednesday since his parents needed to work. They spent the day building a fort and playing minecraft. Oh, and here's some of our still-messy basement:

In the afternoon we decided to search out a park. Their requirements: zipline, swings, and a metal merry go round. The closest park to us has a zipline, but it's broken, swings, and a plastic merry go round that you have to sit in. It's heavy and difficult to get any good speed on. So I posted in a local group on facebook and quickly got a suggestion for another park with a zipline.

I've been struggling with the new neighborhood a bit. Our old neighborhood had a main street section and just felt very small-town like. I'd fallen in love with it immediately. This area feels more suburb-like to me - not my thing at all. But I'm trying to keep an open mind and hope that as I continue to explore a bit I'll find areas to like. This park yesterday was helpful in that. It wasn't all that hard to get to or home from, had all three things the boys wanted, and looks like it has several trails to explore. There are a few sketchy things about it (some stairs had lots of broken glass and one of the boys said they saw some needles in the shrubbery next to the stairs), but those things were easily avoided. At one of our favorite playgrounds in our old neighborhood Malcolm once found a used tampon under the play structure. You simply learn to keep an eye out for such things and steer your kids away from them. The playground area itself was well-maintained and there were several kids playing there, but it wasn't over-crowded. 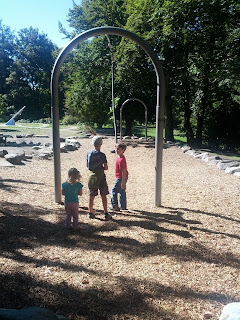 No school yesterday meant we had this friend over again, as well as another friend. They had a few squabbles in the morning, but eventually settled in. Re-built their fort, played some video games, played outside, played Legos. Gareth was invited to spend the night at his friend's house. I'd think they'd need a break from each other after two whole days together, but apparently not.
Posted by Erin at 10:07 AM