Last Wednesday the auto wrecking place came to pick up the car. It was a good thing I'd printed out a form from the DOL, because they hadn't brought anything with them. The driver handed me fifty bucks and loaded up the car after I signed over the title and the DOL form. I was a little nervous about if I'd done everything I needed to or not. I knew I needed to report the sale to the DOL, so I did that after the driver was gone and that put my mind at ease a bit. Not sure if there's any way for me to know that the company has done their end of the things, but it seems like it may not matter so long as I've reported the sale - the DOL will know that we're no longer responsible for that particular car/license plate (apparently WA doesn't allow you to transfer your plates from one car to another). 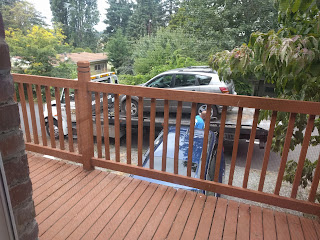 Saturday we pulled together most of Gareth's items for camp. Finished packing up Sunday morning and then headed out. It's crazy to think that a year ago we had just moved into the house - we drove Gareth to camp the day after moving in. Mal was excited to see the "statue-tree" again. I was very confused when this first came up, but then we realized he was talking about the totem pole at camp. Sometimes his memory astounds me - hasn't seen or talked about that in a year but as soon as camp comes up again he remembers. Now if only he'd choose to apply said memory to learning letters and such things. 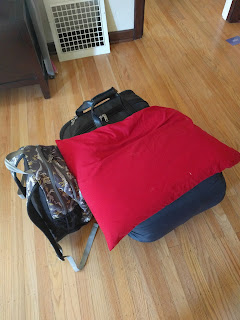 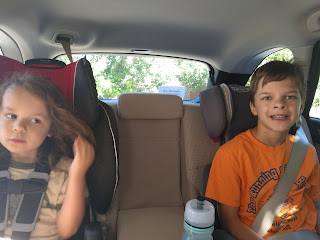 The camp drop-off/pick-up are a little difficult because you're only out of the car for maybe 10 minutes when you get there, so you drive 1.5 hours, get a slight break, then hop back in the car for 1.5-2 hours back (we got stuck in some traffic on the way home). Gareth was very excited to be back at camp, so good-byes were easy. Mal was not thrilled to be coming home with us. We almost had a tantrum on our hands as he started to whine that he wanted to stay at camp. I have a feeling the displeasure at not being able to stay will not dissipate over the next few years. Thankfully I had signed him up for summer preschool this week. When preparing for that the next morning he asked "is my preschool camp?". I responded that it was indeed and he's been thrilled that he also gets to go to camp ever since.

Being at the camp made Ryan and me wish we were going camping. Not much of that will happen over the next couple years, but hopefully we'll do more of it after that. As we were driving off the island we discussed how it might be cool to own a second home - a small cottage type thing - somewhere like that. It'll never happen, but it's fun to dream sometimes.

Since I'm kid-free in the mornings I've used the quiet to do things like practice and go on a bike ride. One night I made Mal a simple dinner and tried a new recipe that's more expensive (so something I wouldn't want to make when feeding everyone) for Ryan and myself. That's about as exciting as things can get when one kid is gone and the other is still around. It's amazing how much quieter things are with no one to pick fights with. We'll head out to pick Gareth up Saturday morning and another year of Camp Quest will be in the books.
Posted by Erin at 10:08 AM