This school year is bringing a lot of adjustments for us. I'm glad I have a couple weeks to get the boys settled in their routine before we have to throw my classes into the mix.

Gareth was assigned to a 4/5 classroom this year. Unfortunately, all of his friends are in regular 4th grade classes. We got to meet the 5th grade teachers yesterday and they all seem dynamic and excited for the year, so I think he'll really enjoy the teachers. And his homeroom is the Reading classroom where, instead of desks, his teacher has several cushy couches and chairs; he was pretty excited about that. Drop off was difficult for me today. I was already exhausted because I'm finally getting the cold that everyone else has had for the past couple weeks and because we had to be up early due to our new early start time (my children are not early risers - they even sleep in on Christmas - so this is going to be a very difficult transition for us). I felt sad to see Gareth glancing around nervously in his class line, seeing no familiar faces and surrounded by 5th graders all at least a head taller than him. He smiled for myself and Gram whenever he looked our way and hopefully he'll get to hang out with his 4th grade friends at lunch and recess still. And I'm sure he'll see some familiar faces once he gets into his classrooms. In our rush to get out the door we didn't have time for pictures, but my mom grabbed some on her phone when we dropped the boys off. 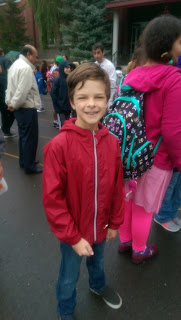 On our way home I realized that I'd forgotten to remind him that he'll be taking the bus after school to his after-care location. He's never taken a bus before, so has no idea how this works. Neither do I for that matter, as I never took a bus when I was a kid. I'd meant to send the letter stating his route with him so he could make sure he was getting on the right bus and all that. So i sent an email to his teacher and hopefully he'll make it on the bus at the end of the day.

As soon as we got home we turned around and got Mal in the car to take him to his new preschool. I think he'll definitely miss his preschool from last year (as will I), but they didn't have a full-day option, so hopefully he'll adjust to the change easily. I was a little nervous for this drop off partly because the preschool hadn't communicated any information to me. Were they actually expecting us today, or not? They at least didn't seem surprised to see us, but also didn't have a sign in sheet for us yet (they will by this afternoon) and haven't set up our tuition payment yet. When we entered the preK room we discovered that it was rather disheveled looking. Apparently they're going to be painting it. So we talked to a woman in the preschool room who told us to leave him there, she took down his name, and I'm assuming that will all get sorted out. He was enjoying checking out all the toys, but seemed a bit surprised that we were going to leave him there. Not upset by it, I just think this location isn't in his head yet as his preschool, so it was unexpected. 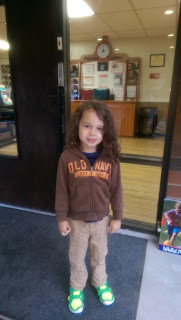 So, yeah. Lots of transitions. A bus, after-care, full day preschool, early mornings, and essentially 5th grade classes. Hopefully in the next couple weeks we'll get everything ironed out before my orientations start.
Posted by Erin at 12:36 PM