Our schools do a staggered start, having most kids start just after Labor Day but the Kindergarteners wait to start until the Monday after that. This allows K teachers to meet with students and parents individually and address any concerns. Mal was a little disappointed that he didn't get to start the same day as Gareth, but took it in stride once he realized he'd get to watch movies most of the day so I could transcribe interviews.

Gareth always likes to take his first day picture by the tree. 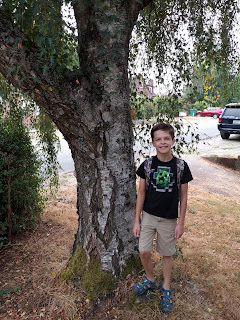 Mal needed a picture with himself in it as well, being some kind of monster, of course. 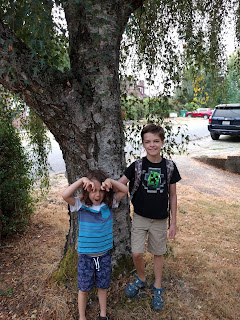 And waving goodbye as his teacher leads them in. 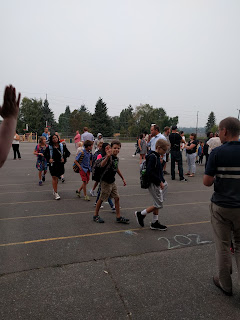 Gareth is lacking the nerves that accompanied the start of school last year. He knows all of his teachers - one from last year and two from his 3rd grade year. He's a little disappointed that most of his friends are in other homerooms, but at least this year they'll get all of their recesses and field trips together. Waking up early was, as expected, difficult. Mal refused to eat anything until after we'd dropped Gareth off, so I began anticipating an especially pleasant morning the following week on Mal's first day.

Mal's meeting with his teacher was..well, let's just say that she got a good picture of what he's like. He had zero interest in participating in the assessment. When he did participate he refused to count above 10 (even though he demonstrated when we got home that he can count at least to 30 before getting bored), refused to identify any shapes besides a circle and triangle, refused to draw a picture of himself, decided to draw a gorilla instead and got exceedingly frustrated when it didn't turn out perfectly, etc. As a parent, it filled me with all sorts of horror, but like I said, at least she knows better what she's in for now. And hopefully she'll know how to get through to him, because I haven't made much headway there during the past 5 years.

As expected, getting Mal to eat this morning was difficult. At least he tried, once I explained that he absolutely needed to eat what he'd asked for because we didn't have time to go through multiple choices and if he didn't eat he wouldn't have any food until lunch and he'd start feeling tired and grumpy. He was happy enough as we headed out to school, though we barely made it in time for the bell - Gareth had to run back and grab an ice pack for his lunch.

Mal wanted his first day picture by the tree as well. Every picture lately he poses like this. 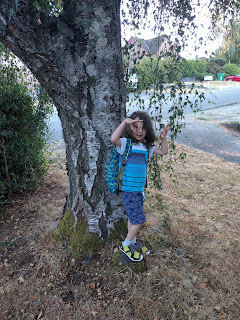 I asked him to put his arms down and ended up with this: 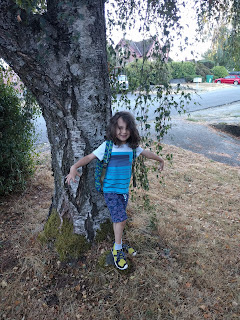 I finally managed to snag one with him not posing while waiting in line. As soon as he realized I was taking a picture, he started to raise his arms. 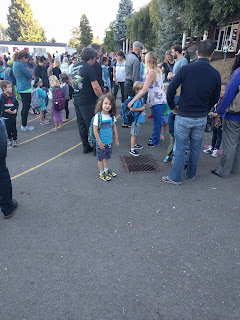 Settled into the classroom. I was worried he wouldn't remember where his cubby or desk were because he seemed supremely disinterested in finding those things the various times we'd been in the room previously. But he was one of the first kids to finish putting his stuff in his cubby and found his desk no problem, though I did have to encourage him to actually sit down. 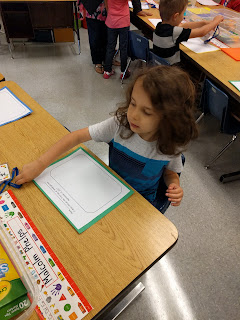 No tears when I needed to leave, though it's possible tomorrow will be a different story. When I left he was working on a drawing and seemed pretty chill. Hopefully it'll be a great year for both kids!
Posted by Erin at 11:32 AM

This post was cracking me up-- I hope Mal does great in school! I'm sure he will-- these teachers are professionals, right? He can't be the most difficult kid they've ever come across!

That's what I'm hoping! And his teacher has been there for a long, long time. I think having a very experienced teacher will be a big plus for him.