Winter break is wrapping up here, with the kids going back to school, Ryan back to work, and me starting internship. We've all really enjoyed sleeping in every day, so I have a feeling it will be a rough transition back.

In the final days of break, Ryan made toffee, which disappeared in no time, and I made fudge. This was my last attempt at fudge. What had always been a reliable recipe throughout my childhood and early adulthood had not been working at all the past two years. Each time, the butter would separate from the rest of the fudge, leaving a goopy mess. I was tired of wasting the effort and supplies (two sticks of butter, nuts, chocolate, etc) on it. But the kids really wanted it, so I gave it one last shot. And it worked this year! The only thing I can figure is that I'd been cooking it on the stove's "turbo boil" burner the previous two years and that this overcooked the sugar mixture. Makes sense in that we'd only had issues with it since moving to this house. As it makes two 9x13 pans of the stuff, I had to figure out how to get rid of it all. Buy Nothing to the rescue! I gave away a pan plus some to neighbors through the group, leaving just enough for the kids for a little while.

On New Year's Eve I eventually told the kids "no" about video games enough times that they gave up. They ended up building a fort in the basement out of boxes, blankets, and desk chairs. At some point they decided that I was an alien monster and they would periodically "sneak" upstairs to battle me with their (empty of darts) nerf guns. This kept them entertained for the whole afternoon and we let them sleep in there overnight. Sadly, the fort had to be taken down the next day in preparation for the return to school (and so we could have full use of the basement back). 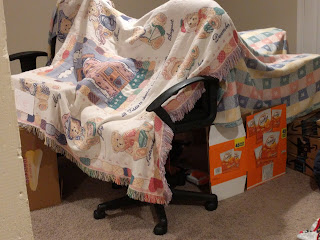 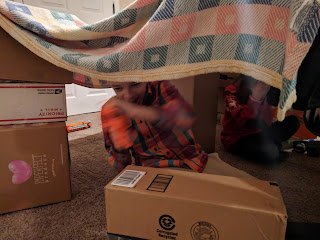 On New Year's Day, as usual, we made our gingerbread house. I spent most of the day on it as I hadn't got around to making the pieces the day before. The boys and I had fun decorating. 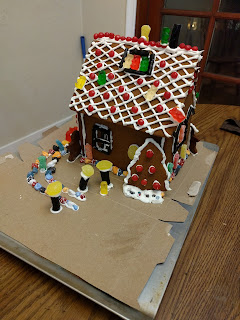 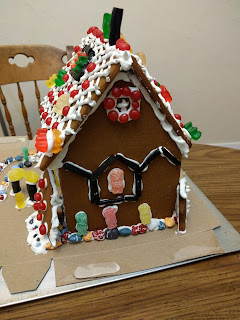 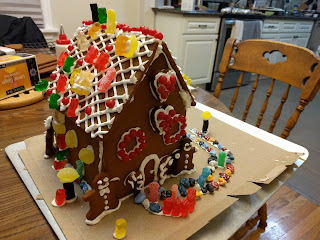 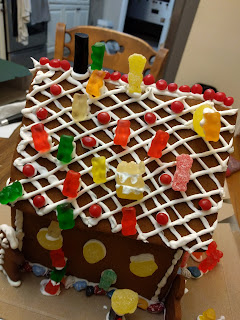 I remember making forts with blankets and chairs as a child. I think my Mom even let us sleep in it one night. Hooray for imagination!

Sounds like a wonderful winter break :) I'm impressed at how much you do. And wow, that's a lot of fudge. Good on you sharing it out like that.

I can see I've neglected blogging. You posted this in winter, but we're coming into winter now, and you're going into summer!