The end of the school year is always quite busy, this one even more so due to concerts and graduations. Gareth had his first concert ever. He was selected to play a solo, which I was starting to feel a bit worried about a day or two before as he practiced and kept messing up in the same spot and struggling to continue after messing up. So I advised him to practice just the section he was struggling with, note by note. He's clearly maturing a bit, because he actually listened to my advice! And it helped. Plus, he discovered all on his own that if he tried to take it really fast, he was more likely to mess up and get lost, whereas if he slowed it down just a bit, he could get through with fewer mistakes.

He did awesome on his solo at the concert. I also discovered that, compared to his classmates, his ear isn't half bad. Sometimes listening to practicing is painful due to intonation. But, oh boy, I'm not sure anyone in the strings group was playing anywhere close to the same pitch for any of their notes. Other instruments have a bit of an advantage there. They might squeak and squawk a bit, but as long as their fingers are in the right place, they'll be sort of close to in tune. 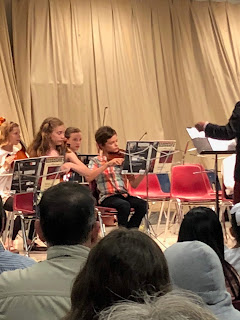 The day of K graduation, Mal lost a second tooth. I got an email from his teacher, letting me know he'd lost it in the wood chips and was devastated, that some kids were planning to search for it at the next recess, but obviously she didn't have high hopes for their success, etc. He ended up handling its loss pretty well. And is adorable missing two teeth. 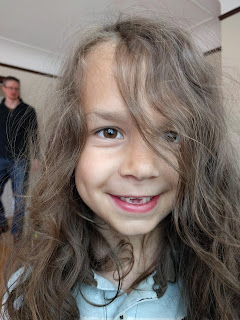 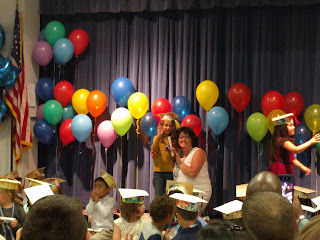 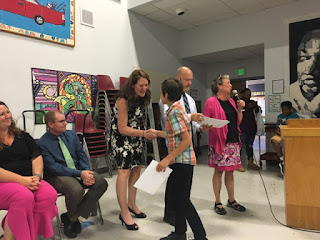 It feels weird to realize their year is over, since I'm still plugging away. The worst part is it means I have to start packing lunches for Mal again. He'd decided to try school lunch and loved it, which eliminated a lot of stress for me (he's sooo picky about what he'll eat in a packed lunch - even some foods he likes are deemed unacceptable for eating away from home). But only 8 more weeks and then we'll all be done!
Posted by Erin at 10:01 PM