Mal has long loved going on bike rides. In the trailer. On the front seat of Colin's bike. He was always drawn to the bike racks at Gareth's old elementary school, wanting to ring all the bells and touch the wheels and just look at the bikes. So I thought for sure he'd be one of those 3 or 4 year olds riding around without training wheels. But then we tried to put him on the balance bike and he was frustrated and nervous. We tried on and off, but usually with the same result. And then we moved to our current house, with no sidewalks and both streets a hill and getting him out on it got pushed down the importance list when it was such a battle to get him on board. So that's how we got to where we have been, with his inability to ride a bike constantly in the back of my mind as a semi-urgent thing that I feel kinda guilty and frustrated about.

I was finally going to give up and put the training wheels on Gareth's old red bike (that we got for his 5th birthday), knowing that it was probably a little small, but hoping spending some time on it would give him a little more confidence. We did that a couple weeks ago. There was some frustration still, caused by being a little too big for the bike and by the fact that you pedal backwards to brake. But it did seem to be working - he was zooming around on it and getting more comfortable with the slight downhill of the elementary school playground. Then he forgot to brake, ran into the fence, scraped up his elbow when he fell off, and I'm pretty sure you could hear the screams of anger at how his bike was trying to kill him all the way in downtown.

We took a few days off for him to get over his wounded elbow, but knew we needed to get him back out. He knew there was another bike in the garage that would fit him better, but without training wheels. We opted for that one last weekend, removed the pedals (but brought them with us, just in case). Still lots of frustration on his part about the weight of the bike and how it kept trying to tilt over or turn (always the bike's fault, never his). But he was seeming to keep his balance pretty well, even if he wasn't zooming along confidently. Eventually, he was ready to give the pedals a go.

Within a couple tries, he was riding with only a little help to stay balanced as he got started. He even was willing to try to start on his own, but kept getting nervous and would stop before he could get going. We went out again the next day and I brought my bike. I wasn't getting much riding time since he kept stopping every time he got to a curve and I kept having to help him start. Finally I told him that I was going to ride around the playground once, but that I'd be back to help him. Of course, while I was doing that, he got started all on his own! He's not to the point where he gets going on his first try 100% of the time, but pretty close. Still some confidence work to do, but we're hoping to get him out practicing regularly to buoy that up. 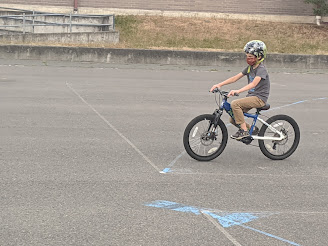 Nice! I am glad he is gaining confidence. I can relate--learning to ride was not easy for young me, either. But riding is so exhilarating once you learn how!

I just assumed that screaming was coming from the CHOP zone! (Sorry, couldn't resist. Too soon?)

Good job persevering with the bike riding! Trying to teach kids this stuff is the worst. I still have PTSD from learning to ride a bike... Best of luck to Mal!!!

Alanna, I definitely got a good laugh from your comment. :D From what I hear, the CHOP was much more peaceful overall than the national news (especially Fox *eyeroll*) let on. Now we just have the trauma of learning to tie shoes (we're going to start struggling to find velcro shoes in his size soon!) and learning to swim ahead of us. Ugh.

I'm glad I didn't offend you! I hardly knew what to make of the CHOP zone-- I'm so sick of feeling like I can't trust any news sources out there! My sister drove by it once, though, and snapped a picture of some (white) guy walking by with the biggest gun I've ever seen (that wasn't in a movie) strapped to his back. She texted it out to the rest of us and as we were all commenting on how scary that was, a different sister added, "Yeah, AND he's not wearing his mask right!" (She was right-- his mask was tucked under his nose.) That made us all laugh!

We actually had Ryder tying his shoes a couple years ago and then he forgot and I STILL haven't mustered up the energy to teach him again. Parenting is hard!