The kids were supposed to be at Camp Quest this week, but that is, of course, cancelled this year. They did get camp shirts still though! 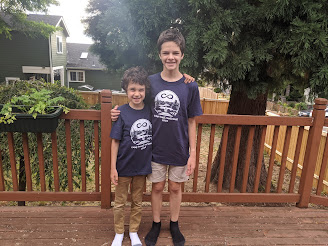 And we picked our first snap peas and carrot from our little raised bed. We may not get many more snap peas, because mildew has taken over the plants. I'm hoping that if we're able to plant earlier next year that will lead to more harvest before we have such issues. And I found a recipe for something that's supposed to be preventative (I tried it out, but didn't seem to be very effective at clearing up the issue after it's taken hold). I'm okay with not getting much this year as we got started late and I went in knowing it would primarily be experimental this year. We had one carrot that we were positive was ready, so pulled it out to find this: 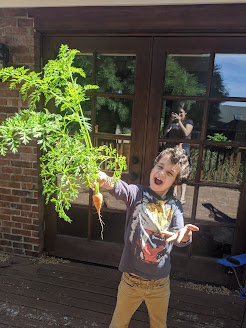 Lots of leafy green, very little carrot! We had a good laugh about it, but it still tasted good. And we have several others growing that will hopefully get a bit longer than that!

This weekend's bake was the classic Bakewell Tart. The combination of flavors is mentioned/used so frequently on GBBO, that this became a must-try. We used a King Arthur Baking recipe again, but switched out the raspberry jam for cherry. We'd decided we wanted to try out frangipane and this particular combo of frangipane-cherry flavor. This bake also gave me the opportunity to try out the ceramic baking beans I bought with some of my birthday gift cards, so I was excited about that.

I threw in my pie chain weight (that was never sufficient on its own) as well, just for good measure. I think the ceramic would've been plenty though. And this is the first time I've tried a blind bake where the bottom of the pastry crust didn't bubble up! So already pleased with this purchase. 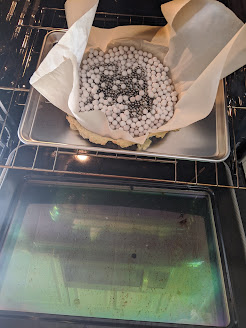 We used one of our new pastry bags to help spread the frangipane. I meant to start the spiral in the center and failed, much to my chagrin. But used a knife to smooth it all out after anyway, so guess it doesn't matter much in the end. Everyone took a turn trying out using the pastry bag. 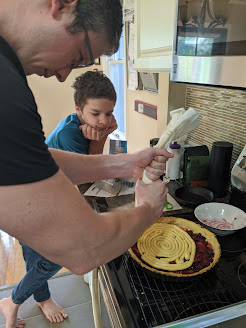 Gareth and Mal enjoyed sprinkling the sliced almonds on top before it went in for the final bake. 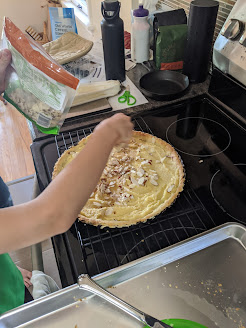 Finished! The edge of the crust didn't turn out very neat. This time I tried leaving excess crust on while it blind baked, but wasn't really sure of the best way or time to trim the excess and have it look neat. I'll have to experiment with different approaches to see what works best for us. 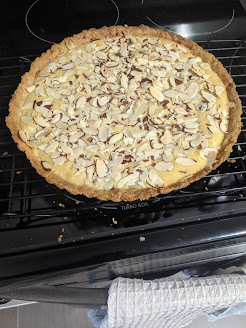 Nice layers of jam and frangipane. 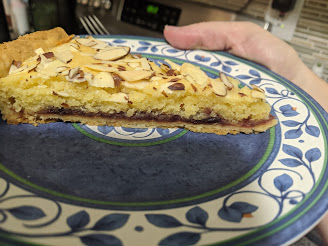 It's tasty, but the almond extract is the predominant flavor by far. This looks like the typical proportions based on pictures on the internet, but I still wonder if we needed more jam and maybe less almond extract. I looked up a variety of frangipane recipes, and some use almond extract while others use vanilla (and rely on just the almond flour for the almond flavor), others use a combination of almond and vanilla extracts, while still others don't use any extracts at all. So lots of future experimentation that we can do with this recipe to determine what our preferences are.

All of us enjoyed it, except for Mal. He wasn't much of a fan day of, but tried it again today and decided he did like it after all. This was another one that was pretty easy, so we'll have to make it again. We also have custard tart on our "to-do" list, which is one I'd really like to get good at since I love custards, pudding, mousse and such things.

Words cannot express how much I love that picture of Mal triumphantly holding up that tiny carrot! How could it have such beautiful leaves and so very little root?!?!?!

And, as always, I'm super impressed with your baking. I can't do anything like that at all. You rock!