Mal had the whole week off, due to parent teacher conferences. I really like his teacher this year - she's working so hard but also seems to have incredibly reasonable expectations and recognize this is not ideal for anyone. She also seems to really "get" Malcolm and how his brain works and appreciates a lot of his quirks that I felt like his teacher last year either just didn't get or else didn't particularly like. I so wish he could have her in-person! This break came at a great time for him as his frustration with remote school was ramping up.
I only had off on Thanksgiving day, so didn't get any prep done ahead of time. I'm tempted next year to just push the feast to Saturday, so I can do some prep Friday evening. This whole middle of the week holiday where you're supposed to cook a bunch of food is just ridiculous. Anyway, it all came together and we managed to get a dinner on the table, albeit a somewhat late one.
I decided this year to have the butcher cut up the turkey into all its parts. Mal was not happy about this, as he reminded me regularly through the day, talking about how sad and boring the turkey was to look at, asking if we could use edible glue to paste it back together, and so on. Instead of my usual herb/salt/pepper/butter mixture under the skin, opted to follow a recipe from Bon Appetit, which called for a dry brine. I let that sit in the fridge for 24 hours. 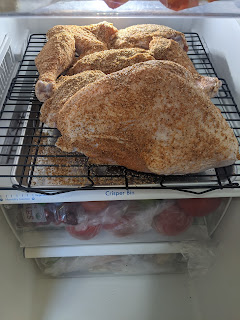 It looked beautiful when done: 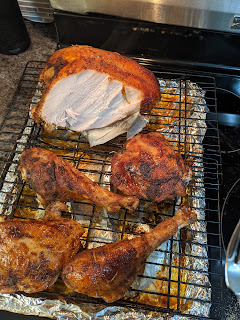 It was moist and nice enough, but I wasn't a big fan of the resulting flavor. Just didn't seem to penetrate into the actual meat much (none of us like eating the skin) and what did was kind of "meh". So I think next year I'll try it cut up like this, but go back to my usual herb/salt/pepper/butter under the skin method. Mal will be happy about that as he really didn't like the flavor of the rub and glaze, though I'm sure he'll still complain about the turkey being cut up.
The stuffing was also a bit of a let down because the store was out of my usual Pepperidge Farm cubed stuffing and so substituted Franz. Honestly, my kitchen smelled gross for most of the day, because the stuffing just smelled like wet toast. It actually tasted okay, but not amazing and definitely not what I'm used to. Pouring gravy over it helped. I'll have to be sure to stock up on the stuffing early next year!
Our brie-persimmon toast was delicious and Ryan and Gareth ate all but one of these between them. 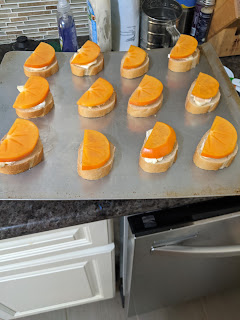 We also had the usual mashed potatoes and ended the evening with pumpkin pie. I managed to successfully blind bake my crusts this year. The one started to catch a bit, but the pies still turned out great. 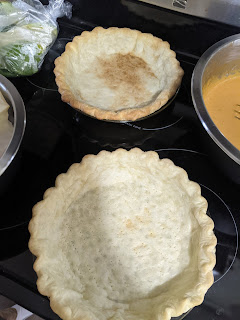 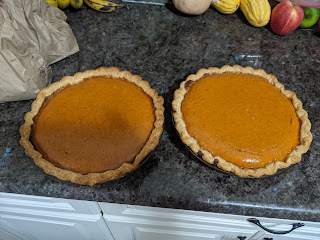 The boys all slept in and spent some time outside and playing video games. My feet were killing me by the end of the day - that's what happens when I don't get to make anything ahead of time I guess. Overall, a lovely day, but still thinking next year might be a Saturday Thanksgiving.
Posted by Erin at 11:17 AM

Learned something new--I am not much of a cook, so had never heard the term "blind bake" before, even though I am this many years old! Looked it up, and now I know! Also, totally agree about the Thursday holiday!