We attended G's first orchestra concert of the year a couple weeks ago. His teacher kept forgetting to give us vital information, like what concert dress was or when the kids needed to show up - communication around my orchestra's first concert was also a little rough. It's been a long time since we've all done this and clearly we're a bit rusty.

He and I got to spend a couple hours in mall hell trying to find concert black clothes at the last minute. There were a shocking number of people there and I can't imagine how terrible it will be over the holidays. Our nearby mall is closed for redevelopment and the next closest one doesn't really have department store staples. Also, athleisure is a terrible fashion trend if you're hoping to find concert black. We had to stick to the men's sections for everything because the teen sections were always just sweatpants/shirts. Gap had black pants but no black button-downs. J. Crew had tons of button downs, but none in black (we came across a family desperately looking for a white one who finally found it there and then were just hoping it would fit). Banana Republic also had no black shirts. We grabbed a nice black sweater there just in case we couldn't find a shirt anywhere. The shoes were the priciest bit, but also the easiest because we walked into the store, found the 3 dressy type black shoes that they had, picked the least expensive (but still expensive, ugh), they had them in his size and we were out of there. I finally remembered that we have a Men's Wearhouse near us, so we headed back there. Even there, the black shirts were slim pickings and we had to settle for something that's a little big. He really needs a belt to complete the ensemble, but everything I saw everywhere was going to be too big. It was a relief to finally have everything found, just frustrating that we hadn't had the information we needed earlier.

I'm pretty sure the seats in the auditorium are the originals from when the school was built in 1959. The concert hadn't even started yet and I was wondering how much money would need to be raised to replace them. Pretty sure my body is never going to forgive me for the hour and a half I spent sitting there...and we have 4 years worth of concerts to get through! 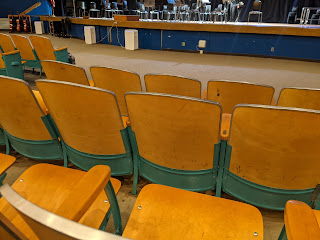 We encouraged Gareth to try out for the chamber orchestra just for the experience. We knew he wouldn't get in, but thought experiencing an audition would be good for him. He didn't get into chamber orchestra, but his teacher made him principal second violin in his orchestra, so he was glad he tried out. The two orchestras play some combined pieces and she told him to play first in the combined group so he gets to practice some more technical parts as well.
Both groups sounded a little rough as they started, but improved as they got going. Again, it's been a couple years since the kids have been able to actually play in person together, so not surprising. It was a good start for a fall concert. 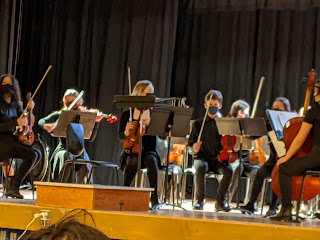 I really like the French Toast brand of dressy clothes on Amazon, for future reference-- this really helps with my inability to go to malls (especially with kids!!!) without having a panic attack!

Glad you got it sorted out and the concert was good-- I'm so happy we're doing stuff in person again!!!

Oh, the joy of attending high school orchestra concerts! Wish we were closer and could attend too, and I'd be bringing a cushion to sit on. Orchestras do so much better in person where they can listen to each other and (supposedly) tune accordingly. This is very difficult to do remotely.

I hope he will really enjoy his orchestra experience! And since the shirt is a little big, maybe it will last a couple of years.