After a hiatus last year for covid, Winter Grand Prix is back on this year. They did hold a virtual version last year where you ran all the races yourself, but we didn't realize they were doing that, and probably wouldn't have had the activation energy required to make it happen if we had. Anyway. G signed up again, of course. And M asked to sign up as well! Come Saturday morning when I woke them up at 7:30, M was no longer certain they wanted to do this. But in the end the three of us piled into the car to head to Magnuson.

It was really cold and drizzly and there was a longer line than we expected for registration, so that wasn't so fun. The race started a little late, but once we got M registered I left M and G to warm up for the race and headed to the car to stay warm and drink my tea! Some parents run with their kids, but I'm not those parents. I do need to up my snack game for the next race though - need to plan ahead and have hot chocolate and scones or something for the kids to have afterward.

As the race started I did get out of the car to grab pictures of the kids and was a little worried when I didn't see M for a long time. But finally found them, carefully jumping around the puddles that were everywhere rather than running through them. 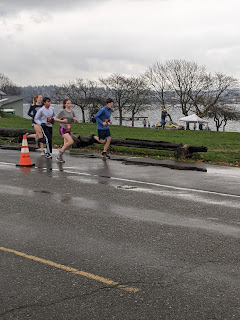 There they are, lap one! Shortly after I took this photo, they stopped to walk, but did start up running again after a few seconds of rest. But I was still a little worried they'd drop out entirely... 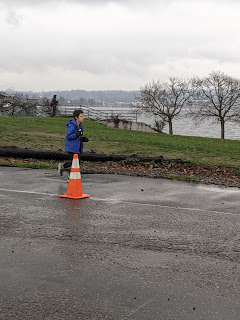 But they didn't! G finished up and then waited for M to come around to the where we could see them and then went to run with M to encourage him along the rest of the way. Serious heart melting happening on my part (and cross-country gratitude for the overall supportiveness and team encouragement they learn there!). Here they are coming to the finish: 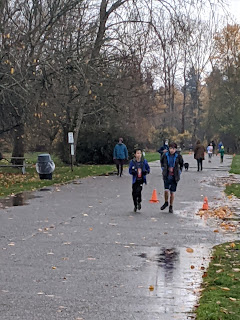 Seriously so proud of M for just finishing. Especially given how gross the weather was. So much colder than it usually is this time of year. No idea if he'll stick it out for the whole series or not - might try to get them some better winter running gear so that at least they can be a little more comfortable! If you want to follow along, they'll post the results here, usually takes a few days to get each set of results up.

I pretty much hate running any time, but running in the rain is the WORST. Good job to your kiddos for sticking to it and for running so well!!!!