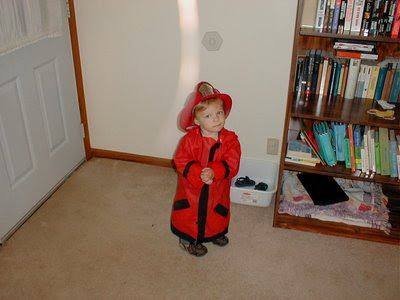 Aww! Wish I could have been there. We went to a silent film - 1925 Phantom of the Opera. It was lots of fun! But Gareth is delightful looking.

I can hear the feminine hearts melting all the way from here. It's making a weird sloshy sound.

if you're talking about melting from the phantom, it's more like freezing in this version. I don't know how the phantom turned into a sympathetic character, but he definitely didn't start out that way: http://en.wikipedia.org/wiki/Image:Lon_chaney_sr.JPG
He's a psycho escapee from an insane prison island, retaliating after years of torture, etc. Ah well.

But for Gareth, yes, my heart sloshes.

Yes, Ryan and I actually saw the Lon Chaney Phantom while we were there. I love the silent films!

Lon Chaney's Phantom played here on Halloween, too, with a live organist. My piano teacher used to play for the silents.

I remember those red plastic fireman hats. Gareth's grandpa and great-uncle Brent had them one year.