Well, Gareth is still a darn cute kid. Some new words that he's learned: monkey, done, milk, water, and horse. I couldn't figure out where he'd picked up monkey until we started doing the monkey song the other day and realized he must've picked it up in Nursery where we sing that every week. At least he's learning something in there! (I'm afraid his spiritual education isn't as advanced as some other kids his age, but he does at least fold his arms for prayers.)

I'm finally getting him to do some of the hand actions for songs at home, but he still never does them in Nursery. His favorite songs are Eensy, Weensy Spider, Ring around the Rosies (which he calls ashes), and the monkey song. Gareth seems to not like structured activities too well. By the time the lesson in Nursery rolls around he doesn't ever want to participate in what everyone else is doing. Usually a couple other kids will see what he's doing and decide it'd be more fun and join him. The other kids are more easily guided back to the activity. I've given up trying to force Gareth back. As long as he's being quiet and not injuring anything I figure I'd rather have him do his own thing than have to be taken out screaming. He's also taken a dislike to holding my hand if I let him down to walk. Someday I'm sure we'll think it's wonderful for him to be so independent.

You know how some kids really like dogs or cats? Well, Gareth is obsessed with horses. Every time we read Rumpelstiltskin we start out "Once there was a poor miller who had a beautiful daughter... and a horse." Every book that has pictures of horses, Gareth is sure to stop and point them out. I hope this isn't an indication of the type of animal he'll want some day.

Gareth's also learned how to jump without holding onto anything and to do a somersault. It's fun to watch him get so excited about such things. Speaking of him getting excited, he still loves the outdoors. We had a nice (albeit cloudy and windy) day yesterday so we took him out to a trail in the area for a walk. After being cooped up for the past couple of months he thoroughly enjoyed wandering free. He threw a great tantrum when it was time to get back in the car. We happily realize that that's his way of saying, "That was lots of fun. Thanks you guys!"

And, finally, here are some pictures of Gareth downing some strawberry smoothie (after eating a bowl of oatmeal and a whole banana - he eats more than I do half the time!) This was a very happy morning for Gareth. 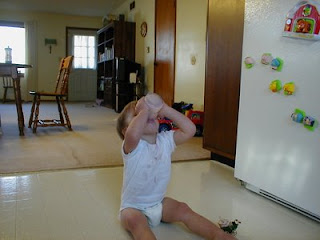 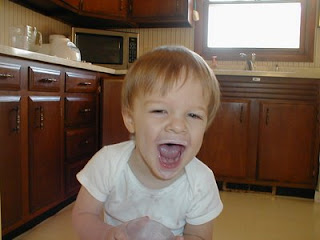 I have such a cute nephew!!!

Awesome. I hope we get to see him soon! Before he's all grown up! Glad he's such a happy boy!