Gareth's five now. It's still hard to believe I'll have a kid starting kindergarten in the fall. Gareth seemed so little until we brought Malcolm home and now he seems huge (I'd swear he's doubled his weight) and so accomplished. I was watching him get dressed the other day and realizing how impressive it was that he was putting his socks on by himself. This is something he's been able to do for quite some time now and that I'd come to take for granted, but I was suddenly struck by how far he'd come in the last five years and even in the past year.

In the past year he's learned all of the letter sounds and can read basic words. Preschool has been excellent for his social and emotional skills, not to mention all the random stuff he learns in small group from the various parents. He's trying to skip right over the whole addition/subtraction thing and go right for multiplication ("two 3's is 6 and three 3's is 9...!"). And his most recent development has been to start painting/drawing actual images. At the beginning of the year he'd just paint a line in every color that was available with no intention of creating anything in particular. But last week he brought this home from preschool: 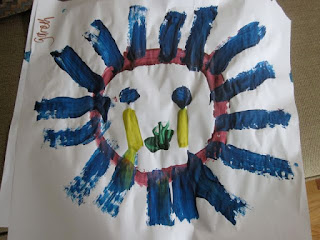 This is an octopus. I've never seen Gareth create something so intentional. I'd just assumed he wasn't all that into art, which wouldn't be surprising considering his parents' lack of talent where the visual arts are concerned. And I was okay with that. But I've got to say, it's rather fun to have some art come home that he's excited to tell you about and that actually looks like something.

He had a very relaxing birthday - we'll have a low-key party on Saturday with a few friends. His Gram bought him a pink princess ball yesterday which he's totally in love with. We were hoping to make it outside with him, but missed out on the nicer morning weather. So we pretty much spent the day watching Avatar: The Last Airbender (he's very excited for Gram to see all the episodes), playing with his ball, and just generally hanging out. We had pasta salad for dinner (his current favorite) and then it was off to bed a little later. He seems happy to be five and already excited for what the next year will bring (especially elementary school). 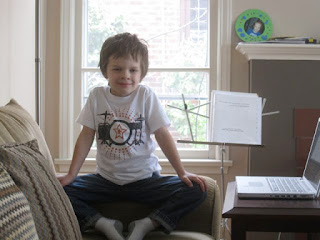 He's FIVE?!! That seemed to go by pretty quick, at least to me!