Malcolm at Two and Four Weeks

Malcolm is slowly adjusting his internal clock and realizing that daylight (what we get of it) means he needs to occasionally be awake and that darkness means time to sleep. He eats well (though he's just recently started struggling with gas and that's causing some issues) and we're usually only up with him once or twice after putting him down for the night. Here's hoping he sleeps through the night soon!

Ryan worked from home a couple weeks ago and we took Malcolm in for his two week check. He was up to 7 pounds, 8 ounces and grew a whole inch in those two weeks. He was still a little jaundiced, but his doctor didn't seem worried about it. She explained to us that there are different types of jaundice and she's sure this is just from breast milk (apparently sometimes breast milk has a hormone in it that interrupts the breakdown of bilirubin temporarily) and as long as he continues to eat/sleep/poop well we don't need to worry. Hopefully it will be gone by the time he has his next visit at two months. 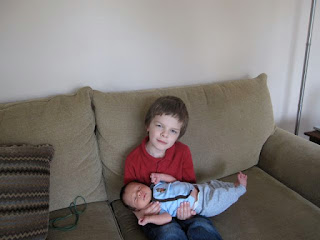 Adjusting to two has been made easier by the large gap between them. Gareth is perfectly capable of doing many things on his own and able to help out more. I honestly can't imagine having a two year old and a newborn. Though I know plenty of people who have had that, I think it would have been overwhelming for me. It is strange to have to carry around a diaper bag again, but otherwise not too bad. Of course, we have family visiting for the next couple of weeks which makes things easier but I think I was doing pretty well all on my own for the week before family got here. The house wasn't perfectly clean (but then, it wasn't before Malcolm came either), but the big things usually got done. I've yet to figure out how to fit practicing in, but we've also been a little busy with Easter and figuring out plans for Gareth's birthday in addition to adjusting to life with a newborn. Hopefully this next week will bring more time to practice. I've got to admit, I'm also looking forward to preschool being done for the year at the end of May. I love Gareth's preschool and so does he, but right now it makes it difficult to get things done. Not only do I have to plan things around when Malcolm will want to eat, but I also have to make sure we'll be back from any outings in time for school/before school is over and it's just an extra thing to worry about. Gareth is on spring break this week and while having both boys home presents certain challenges, I think it will be easier to get errands and projects done when our time is a little more flexible. And when school starts back up again he'll be going full-time and Malcolm will be five months old and hopefully have a more set routine.

Our neighbors across the street just had a baby boy almost exactly three weeks after Malcolm (another couple on the street is also expecting a boy in June sometime). We met him a few days ago and it was amazing to see how big Malcolm is compared to him. They were about the same size at birth, so it made it obvious just how much Malcolm has grown since we brought him home. I'm excited for him to grow, but do find myself missing the newborn Malcolm. 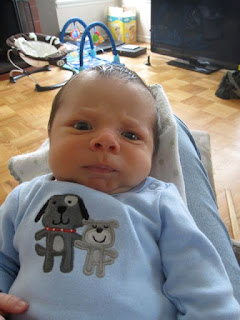 We knew he'd grown a lot, but not how much. I opted to take Malcolm in to the doctor a couple days ago to get a prescription for gas drops (can't pay for over the counter stuff with the fsa unless we have a prescription) and so we got to find out his current weight again. In the two weeks between his last visit and this one he put on a lot of weight - he's now 9 pounds, 3 ounces. And a little happier (if more spit-uppy) now that he has help getting rid of gas.

Wow, he's growing fast. That's a lot of weight gain in a pretty short period of time! It's hard to believe how much he's changed in the last few weeks, too. He looks far more alert. Here's to hoping he gets more interactive soon, too.

I'm glad Sylvia and Paul are as far apart as they are for similar reasons. I don't think I could handle dealing with diapers for two kids at once.