I've always thought having a graduation from preschool is a bit ridiculous. And I still do. But Gareth's class had one so I dutifully attempted to get some pictures. Unfortunately my camera was having a blurry day. Usually it takes great pictures. And then every once in a while it decides that every picture it shoots will be blurry. It doesn't matter what it's of or how still you are or anything; the picture will be blurry.

Their teacher actually did a very nice job with the whole "graduation" thing. She wrote a note to each child and gave them a ring and a necklace and then put on their caps that they had decorated. It was nice and brief and then she had snacks for everyone. Before they did all of that she had a circle with the kids where they got to share their favorite thing about preschool. I missed what Gareth said because Malcolm was screaming, but apparently he said his favorite thing was celebrating birthdays and getting to see baby pictures of his friends. 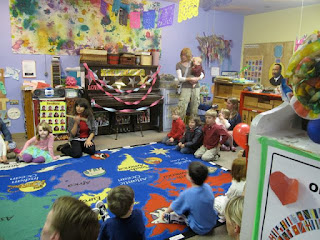 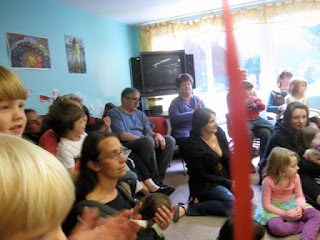 Waiting for his turn during the graduation ceremony. I was feeding Malcolm, so Gareth sat with Grandma Jean. 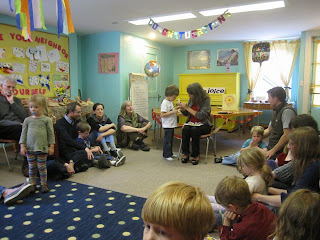 The day after this they had a picnic and then yesterday one of the kids had a birthday party which most of the preschoolers made it to, so graduation wasn't really a final good-bye. Preschool has been really good for Gareth and he misses it already, but he's very excited for Kindergarten in the fall.
Posted by Erin at 12:45 PM

Hearing about all the "graduations" going on now always reminds me of the quote from The Incredibles. "It's not graduation. He's moving from the fourth to the fifth grade." "It's a ceremony!" "It's psychotic!" :)

Yeah, I thought of the same thing when I found out they were doing one for Gareth's class. :)