Malcolm is a healthy six-month-old these days. At his appointment he weighed 14.14 lbs (10%), was 26 3/4 inches (55%) and had a head circumference of 44cm (75%). So he gained about half a pound in the last two months and grew a little over two inches. Typical for a kid of ours I'd say. Ryan was surprised though because he feels like Malcolm's getting fatter, and even Gareth asked the other day why Malcolm is so fat. He definitely has a couple more rolls than Gareth did at that age, but it doesn't take much to beat out Gareth in that department.


I tried feeding him some carrots the other day and noticed a rash shortly afterward. The rash is still there, more than a week later, so not food related, but we hadn't fed him any other solids since because I wanted to be sure. His doctor thinks it's the soap we're using at bath time drying out his skin and gave us another type to try, plus some lotion. So, if I can get my act together, he'll start eating cereal and trying new fruits and vegetables over the next few weeks. He also has a yeast infection, so we've now got a prescription to deal with that and hopefully we'll be back to a rash-free baby shortly.

Looking back at old pictures, it appears Gareth was starting to sit up a bit on his own at this point. Malcolm isn't there yet, but I wouldn't be surprised if he crawls before Gareth did, because he's already inching his way along the floor at times. He's rather quiet, but extremely observant. And he loves to engage with other people, making eye contact and smiling even if he doesn't babble at them. He still doesn't laugh, though he is amused by many things, opening his mouth in a huge smile to show his excitement. Malcolm loves watching his big brother and likes doing Wheels on the Bus, Eensy Weensy Spider, and Pat-a-Cake with me. 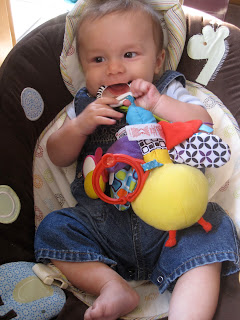 He's much more into oral exploration than Gareth was. Malcolm wants to put everything in his mouth. He's constantly sucking or chewing on something (which also makes for a lot of saliva everywhere). We've got several old rattles and other toys that are meant to be chewed on. People gave them to us before we had Gareth and they got absolutely no use with Gareth. He could have cared less about them. But Malcolm uses them exactly how they're meant to be used. And he recognizes, knows, and loves those toys. His eyes light up when he sees you approaching with one of his favorites. Malcolm's firefly from his aunt and uncle is a continual favorite - so many easy to grab places, lots of crinkly noises, rattle, and the mirror is great for chewing on.
Posted by Erin at 11:51 AM

My nephew is adorable!!