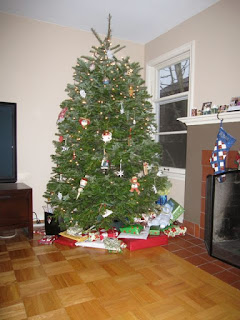 We had quite a full Christmas season this year. We started out the month by having a college friend of mine and her family over for dinner. Not exactly Christmas-related, but it happened this month. Ryan and I went to a potluck/white elephant party by ourselves early in the month (a white elephant where you could come home with more than one gift each; thankfully we ended up with a couple of desirable items in addition to the three or four less desirable items). The next weekend we went to another white elephant party (at which we gave away items from our earlier party) put on by the family we usually walk to school with. Then the weekend before Christmas we had a brunch with some good friends. We did this brunch last year as well and are thinking we will make a yearly thing out of it. We ended the month by having dinner with a family who lived in the same house as us during our internship here. It may not sound like much to an extrovert, but for our usual non-social selves this made for an extremely busy calendar.

Our Christmas was excellent this year - pretty much everything I think Christmas should be about. Christmas to me has always been about baking, decorating, listening to Christmas music, watching movies, giving presents -  and generally doing all of this as a family. I think we succeeded in creating some great memories for Gareth, which was our primary goal this year. Though he was pretty excited about Santa and presents, he was a bit confused about some of the details of how Christmas goes in our house, probably because we haven't had Christmas in our house since he was 2, and partly because we're still working some of that out ourselves.

Christmas in Seattle was rainy, which means that it stayed dark in our house even later than usual (usual being about 7:45 am). Because it was nice and dark, it was something like 8 or 8:30 before Gareth and Malcolm woke up. We'd made a makeshift gate out of the playpen to keep Gareth from running out to the living room too soon, but he did an excellent job of remembering the rules we'd talked to him about the day before so I'm not sure the playpen gate was entirely necessary. Gareth for once got dressed without whining about how unjust the world is and then he and Malcolm patiently waited in our room for Ryan and I to get showered and dressed. About 9:30 we were finally all ready to head out and see what Santa had brought.


Gareth was awed by the piano keyboard that Santa left and we spent a few minutes playing around with that. Then he and Malcolm opened their stockings and Gareth was very excited to find a bell for his bike, something he's been wanting since he got the bike in April. He was also very excited about the Mario fruit snacks he found (we never buy fruit snacks and he'd been begging for these for weeks, so they were a pretty special treat to find in his stocking). Malcolm was more than happy to chew on the sippy cup found in his stocking. He was less than impressed with the puff cereal things, though they've grown on him since. 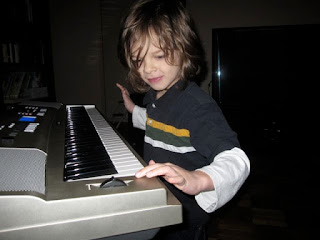 We opened one more gift - a recording device with a message on it telling Gareth to go to the basement where he got to check out a new video game - before taking a break for our traditional breakfast of blueberry bake, grapefruit and bacon. Gareth has been making "recordements" of himself reading every day since - and even in the middle of the night, something which I made sure to put a quick end to the next morning.

Gareth was totally on board with taking turns opening presents as he usually wanted to open up and check out each item before moving on. We let him hand out presents with not too much direction from us, and he did quite well at making sure everyone was getting a turn. 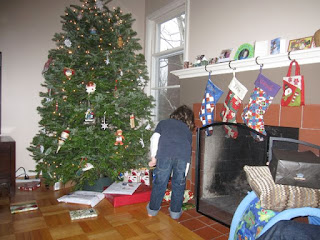 Malcolm was happy about the wrapping paper, and sad that we didn't let him swallow any of it. 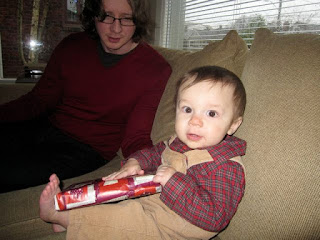 This is the first year I had Gareth come up with a gift for Ryan. I was torn for a bit about whether to let him go with his own idea if he had one or to direct him toward items that I knew Ryan would definitely want. In the end, I decided to let him go with his idea since he did have one and I thought it'd be more exciting for him if the gift was something he came up with himself. He and Ryan had been playing a video game called Bastion, so Gareth decided he wanted to draw a Bastion picture for Ryan. I offered to get a frame to put it in: 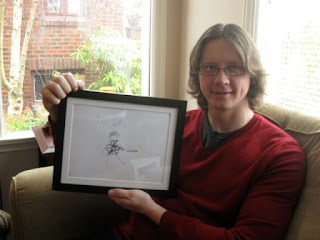 We finished up our presents and stockings in the early afternoon and spent the rest of the day relaxing and playing with new toys. I realized a couple of weeks before Christmas that this is the first Christmas where Ryan and I have worked together on the prep for this holiday. Up until now we've either gone to family for Christmas (and therefore haven't had much to do) or Ryan's been in school up until the last minute, leaving me to do most of the preparations. It's definitely more fun to do it together. 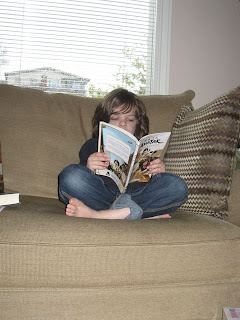 Our tree managed to make it through Christmas, and even through New Year's Eve, though it's getting quite dry. Gareth is very sad about having to take it down and has asked how long it is until it's December again. Ryan and I take this as a good indication that he enjoyed the season and will be excited for it to come around again next year.
Posted by Erin at 10:49 PM

This sounds like a really lovely Christmas! I LOVE your tree--it's the perfect size and shape. And I think letting Gareth choose a gift for Ryan was a really sweet idea, and I'm sure Ryan will always treasure his Bastion picture. I have several similar pictures that I have received over the years, and I love them.

And I'm curious about your blueberry bake...care to share? :-)